A cutaway of an aircraft boxer engine.

A flat engine is an internal combustion engine with pistons that are all relatively horizontal. A straight engine canted 90 degrees from straight up is a flat engine, as is one in which the cylinders are arranged in two banks on either side of a single crankshaft. In both configurations, the motion of all the pistons is in the horizontal plane.

Usually, each pair of corresponding pistons from each bank of cylinders share one crank pin on the crankshaft, either by master/slave rods or by two ordinary rods side by side. Some authorities divide flat engines into boxer engines which do not share crank pins in this way, and 180° engines which do.

Flat engines are shorter than in-line engines, and have a lower center of gravity than any other common configuration. Automobiles and motorcycles powered by a flat engine generally have a lower center of gravity, giving better stability and control. These engines, however, are also wider than more traditional configurations and are more expensive to build. The extra width may cause problems fitting the engine into the engine bay of a front-engined car owing to the interference with the steering wheels, and create cornering problems for a motorcycle.

The flat configuration also lends itself very well with air cooling and aircraft engines. Air-cooled designs such as in the VW Beetle used a flat-4, as did the Porsche 356 and 912. The Chevrolet Corvair used an air-cooled flat-6, a rarity in American designs. Both the older and newer models of the Porsche 911 use a flat-6, at first air cooled but later models are water-cooled. These automobiles situate the engine in the rear rather than the front, where its width does not interfere with the steering of the front wheels.

All versions of the Subaru Impreza, Forester, Tribeca, Legacy and SVX use either a flat-4 or flat-6 engine.

Boxer engines got their name because each pair of pistons moves simultaneously in and out rather than alternately, like boxers showing they're ready by clashing their gloved fists against each other before a fight. Boxer engines of up to eight cylinders have proved highly successful in both automobiles and motorcycles, and continue to be popular for light aircraft engines.

One benefit of using a boxer engine versus a V-engine is that the design provides good balance because each piston's momentum is counterbalanced by the corresponding piston movement of the opposite side. Boxers are one of only three cylinder layouts that have a natural dynamic balance; the others being the straight-6 and the V12. These engines can run very smoothly and free of unbalanced forces with a four-stroke cycle and do not require a balance shaft or counterweights on the crankshaft to balance the weight of the reciprocating parts, which are required in other engine configurations. Note that this is generally true of boxer engines regardless of the number of cylinders (assumed to be even), but not true for all V and straight, or inline engines. However, in the case of boxer engines with fewer than six cylinders, unbalanced moments (also known as a "rocking couple") are unavoidable due to the "opposite" cylinders being not exactly opposite but offset slightly.

Boxer engines tend to produce more noise than inline and V-engines because valve clatter is not so well dampened due to lack of covering by air-filters and other components, and produce a larger torsional vibration than a V-engine, and so tend to require a larger flywheel. They have a characteristic smoothness throughout the rev range and, combined with the mounting position immediately ahead of the rear axle, offer a low center of gravity and more neutral handling.

Non-boxer flat engines have been used in performance and racing cars, notably 180 degree V12s. Ferrari used a 180° version of the Colombo V12 in the Testarossa and Berlinetta Boxer models. The Porsche 917 flat 12 engine is also not a boxer. 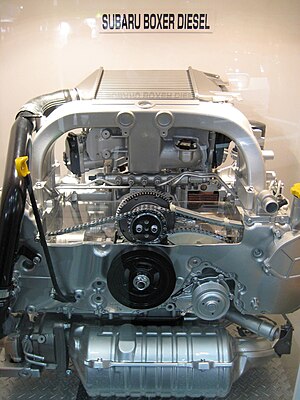