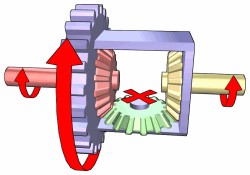 Input torque is applied to the ring gear, which turns the entire carrier (all blue), providing torque to both side gears (red and yellow), which in turn may drive the left and right wheels. If the resistance at both wheels is equal, the pinion gear (green) does not rotate, and both wheels turn at the same rate. 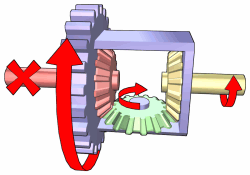 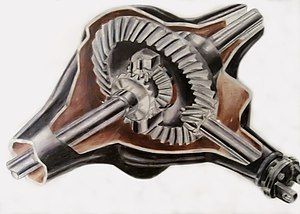 The differential on the rear axle of a car

In an automobile and other wheeled vehicles, a differential is a device, usually consisting of gears, for allowing each of the driving wheels to rotate at different speeds, while supplying equal torque to each of them.

A vehicle's wheels rotate at different speeds, especially when turning corners. The differential is designed to drive a pair of wheels with equal force, while allowing them to rotate at different speeds. In vehicles without a differential, such as karts, both driving wheels are forced to rotate at the same speed, usually on a common axle driven by a simple chain-drive mechanism. When cornering, the inner wheel travels a shorter distance than the outer wheel, resulting in the inner wheel spinning and/or the outer wheel dragging. This results in difficult and unpredictable handling, damage to tyres and roads and strain on the entire drive train.

The following description of a differential applies to a "traditional" rear-wheel-drive car or truck: Power is supplied from the engine, via the gearbox, to a propeller shaft (U.S. term: driveshaft), which runs to the rear axle. A pinion gear (shown in green in the diagrams) at the end of the propeller shaft is encased within the differential itself, and it engages with the large ring gear (British term: crownwheel), shown in the diagrams. The ring gear is attached to a carrier, which holds a set of small planetary gears. The three planetary gears are set up in such a way that the two outer gears (the side gears), can rotate in opposite directions relative to each other. The pair of side gears drive the axle shafts to each of the wheels. The entire carrier rotates in the same direction as the ring gear, but within that motion, the side gears can counter-rotate relative to each other.

Thus, for example, if the car is making a turn to the right, the main ring gear may make 10 full revolutions, and during that time, the left wheel will speed up because it has further to travel, and the right wheel will slow down correspondingly, as it has less distance to travel. The side gears will turn in opposite directions relative to each other by, say, 2 full turns, resulting in the left wheel making 12 revolutions, and the right wheel making 8 revolutions.

When the vehicle is travelling in a straight line, there will be almost no movement of the planetary system of gears, other than the minute movements necessary to compensate for slight differences in wheel diameter, undulations in the road (which make for a longer or shorter wheel path) etc.

One undesirable side effect of a differential is that it can reduce overall torque - the rotational force which propels the vehicle. The amount of torque required to propel the vehicle at any given moment depends on the load at that instant - how heavy the vehicle is, how much drag and friction there is, the gradient of the road, the vehicle's momentum, etc.. For the purpose of this article, we will refer to this amount of torque as the "threshold torque".

The torque on each wheel is a result of the engine and transmission applying torsion, a "twisting force" against the resistance of the traction at that wheel. Unless the load is exceptionally high, the engine and transmission can usually supply as much torque as necessary, so the limiting factor is usually the traction under each wheel. It is therefore convenient to "measure" traction in terms of how much torque can be generated between the tire and the ground before the wheel starts to slip. If the total traction under all the driven wheels exceeds the threshold torque, the vehicle will be driven forward; if not, then one or more wheels will simply spin.

To illustrate how a differential can limit overall torque, let us imagine a simple rear-wheel-drive vehicle, with one rear wheel on asphalt with good grip, and the other on a patch of slippery ice. With the load, gradient, etc., the vehicle requires, say, 2000 Nm of torque to move forward (i.e. the threshold torque). Let us further assume that the traction on the ice equates to 400 Nm, and the asphalt to 3000 Nm.

If the two wheels were driven without a differential, each wheel would "push" against the ground as hard as possible. The wheel on ice would quickly reach the limit of traction (400 Nm), but would be unable to spin because the other wheel has good traction. The traction of the asphalt plus the small extra traction from the ice exceeds the threshold requirement, so the vehicle will be propelled forward.

With a differential, however, as soon as the "ice wheel" reaches 400 Nm, it will start to spin. The planetary gears inside the differential carrier will start to rotate because the "asphalt wheel" encounters greater resistance. Instead of driving the asphalt wheel with more force, the differential will allow the ice wheel to spin faster, and the asphalt wheel to remain stationary, compensating for extra speed of the spinning ice wheel. The torque on both wheels will be the same - limited to the lesser traction of 400 Nm each. Since 800 Nm is less than the required threshold of 2000 Nm, the vehicle will not be able to move.

Note that an observer will simply see one stationary wheel and one spinning wheel. It will not be obvious that both wheels are generating the same torque (i.e. both wheels are in fact "pushing" equally, despite the difference in rotational speed). This has led to a widely held misconception that a vehicle with a differential is really only "one-wheel-drive". In fact, a normal differential always provides equal torque to both driven wheels (unless it is a locking, torque-biasing, or limited slip type).

There are various devices for getting more traction from vehicles with differentials. One solution is the limited slip differential (LSD), the most well-known of which is the clutch-type LSD. With this differential, each of the side gears has a clutch which limits the speed difference between the two wheels.

Another solution is the locking differential, which employs a mechanism for allowing the planetary gears to be locked relative to each other, causing both wheels to turn at the same speed regardless of which has more traction; this is equivalent to removing the differential entirely.

Electronic traction control systems usually use the ABS system to detect a spinning wheel and apply the brake to it. This progressively raises the reaction torque at that wheel, and the differential compensates by transmitting more torque through the other wheel - the one with better traction.

A four-wheel-drive vehicle will have at least two differentials (one for each pair of wheels) and possibly a center differential to apportion power between the front and rear axles. Vehicles without a center differential should not be driven on dry, paved roads in all wheel drive mode, as small differences in rotational speed between the front and rear of the vehicle cause a torque to be applied across the transmission. This phenomenon is known as "wind-up" and can cause damage to the transmission. On loose surfaces these differences are absorbed by the slippage on the road surface.

A relatively new technology is the electronically-controlled active differential. A computer uses inputs from multiple sensors, including yaw rate, steering angle, and lateral acceleration and adjusts the distribution of torque to compensate for undesirable handling behaviors like understeer. Active differentials used to play a large role in the World Rally Championship, but in the 2006 season the FIA has limited the use of active differentials only to those drivers who have not competed in the World Rally Championship in the last five years.

The first use of this technology on a production automobile was Honda's 1997 Active Torque Transfer System on the Prelude SH. This "differential" was actually a planetary gearset placed next to an open front differential, not an integrated system. Fully integrated active differentials are used on the 2005 MR Ferrari F430 and on all four wheels in the Acura RL.

The second constraint of the differential is passive – it is actuated by the friction kinematics chain through the ground. The difference in torque on the tires (caused by turns or bumpy ground) drives the second DOF, (overcoming the torque of inner friction) to equalise the driving torque on the tires. The sensitivity of the differential depends on the inner friction through the second DOF. All of the differentials (so called “active” and “passive”) use clutches and brakes for restricting the second DOF, so all suffer from the same disadvantage – decreased sensibility to a dynamically changing environment. The sensibility of the computer controlled differential is also limited by the time delay caused by sensors and the response time of the actuators.

There are many claims to the invention of the differential gear, but it is likely that it was known, at least in some places, in ancient times. Here are some of the milestones in the history of this device.