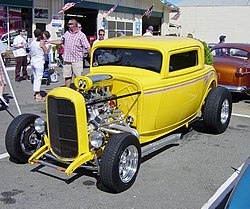 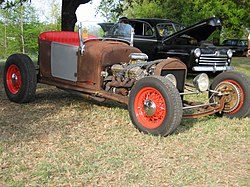 Volksrod based on a Volkswagen Type 1.

Hot rods are cars which have been customized for performance, and/or appearance. A "Hot Rod" referred to the cam inside the engine. It was adopted as the name of a car that had been "hopped up" by modifying the cam to achieve higher performance.The term became popular during and after World War II, particularly in California, originally meaning an old car (most often a Ford, typically a Model T, Model A, or a 1932 to 1934 Ford Model B or Ford V-8) which had been modified by reducing weight (sometimes modifying the body by removing roof, hood, bumpers, windshield and/or fenders), lowering it, modifying, tuning, or replacing the engine to give more power, and changing the wheels and tires to improve traction and handling. Such modifications were considered to improve the appearance as well; often the car was also given a distinctive paint job.Hot Rod was sometimes a term used in the 1950s and 1960s as a derogatory term for any car that did not fit into the mainstream. As hot rodding became more popular in the 1950s, magazines and associations catering to "street rodders" were started. Hot rodders including Wally Parks created the National Hot Rod Association NHRA to bring racing off the streets and onto the tracks. The annual California Hot Rod Reunion and National Hot Rod Reunion are held to honor pioneers in the sport. The Wally Parks NHRA Motorsports Museum houses the roots of hot rodding. Nowadays people who own hot rods keep them clean and try to make them noticeable. Those who work according to the original idea of cheap, fast and no frills are often called rat rods. There are many magazines that feature real hot rods, including The Rodders Journal. Commercial magazines include Hot Rod Magazine, Street Rodder, and Popular Hot Rodding. There are also television shows such as My Classic Car, and Horsepower TV. Hot rods are part of American culture, although there is growing controversy within the automotive hobby over an increasing trend towards the acquisition and irreversible modification of surviving historic - some even very rare - vehicles rather than the traditional hot rodding concept of the salvage and remanufacture of reusable junked parts.

Author Tom Wolfe was one of the first to recognise the importance of hot rodding in popular culture and brought it to mainstream attention in his book The Kandy-Kolored Tangerine-Flake Streamline Baby.

The Hot Rod era extended from 1930 to the beginning of the muscle car era (about 1965), reaching its height in about 1955. During this time, there was an adequate supply of what hot rodders called "vintage tin": junk cars manufactured prior to 1942 that could be had cheaply. Many of these had sound bodies and frames and had been junked for mechanical reasons, since the running gear of early cars was not durable. The typical hot rod was heavily modified, particularly by replacing the engine and transmission, and possibly other components, including brakes and steering. Certain engines, such as the flathead Ford V8, and the small block Chevrolet V8 were particularly popular as replacements because of their compact size, availability, and power. The early Hemi was popular in applications that required more power, such as drag racing.

Construction of a hot rod requires skills in mechanics, welding, and automotive paint and body work.

The "classic era" of hot rod construction ended around 1965, partly because the supply of vintage tin had diminished, but mostly because new cars were equipped for greater speed and power from the factory with little or no modification required.

Today, there are still a large number of hot-rodders and street-rodders. The Street Rod Nationals serves as a showplace for the majority of the hot-rodding and street-rodding world to display their cars and to find nearly any part needed to complete them.

There is still a vibrant Hot Rod culture worldwide, especially in the United States and Sweden. The hot rod community has now been subdivided into two main groups: hot rodders and street rodders. Hot rodders build their cars using a lot of original, old parts, and follow the styles that were popular from the 1940s through the 1960s. Street rodders build cars (or have them built for them) using, primarily, new parts.

Hot rod builders such as Boyd Coddington, famed hot rod designer currently stars in American Hot Rod, a documentary series on Discovery channel. One of his cars appeared in the music video of Gimme All Your Lovin’ by the rock band ZZ Top. The Discovery Channel airs several shows dealing with modern interpretations of kustom kulture such as Monster Garage, American Hot Rod, and Overhaulin'.

Juxtapoz Magazine, founded by the artist Robert Williams, has thrived as a recent extrapolation of kustom kulture art. It has also begun to garner respect as an exhibitor of contemporary artistic talent that transcends kustom kulture's bounds.

The culture is vibrant in Sweden where there are many automobile enthusiasts, also known as raggare. Meetings like Power Big Meet and clubs such as Wheels and Wings in Varberg, Sweden have established themselves in Swedish Hot Rod culture. Since there is very little "vintage tin" the hot rods in Sweden are generally made with a home made chassis (usually a Ford model T or A replica), with a Jaguar (or Volvo 240) rear axel, a small block V8 and fiberglass tub, but some have been built using for instance a Volvo Duett chassis. Because the Swedish regulations required a crash test even for custom-built passenger cars between 1969 and 1982 the Duett option was often used since it was considered a rebodied Duett rather than a new vehicle.[1][2][3][4][5][6]

As the supply of original steel bodies dwindles to nothing, those who reject fiberglass replicas can buy new reproduction bodies. They are not actual antiques, but often are superior in some aspects such as build quality to original hot rod bodies. The best bodies can command a price of $10,000 or more.