Steering is the term applied to the collection of components, linkages, etc. which allow for a car or other vehicle to follow a course determined by its driver, except in the case of rail transport by which rail tracks combined together with railroad switches provide the steering function. 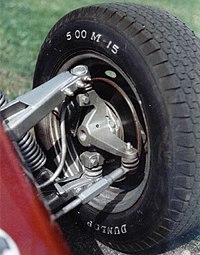 The most conventional steering arrangement is to turn the front wheels using a hand–operated steering wheel which is positioned in front of the driver, via the steering column, which may contain universal joints to allow it to deviate somewhat from a straight line. Other arrangements are sometimes found on different types of vehicles, for example, a tiller or rear–wheel steering. Tracked vehicles such as tanks usually employ differential steering — that is, the tracks are made to move at different speeds or even in opposite directions to bring about a change of course.

Many modern cars use rack and pinion steering mechanisms, where the steering wheel turns the pinion gear; the pinion moves the rack, which is a sort of linear gear which meshes with the pinion, from side to side. This motion applies steering torque to the kingpins of the steered wheels via tie rods and a short lever arm called the steering arm.

Older designs often use the recirculating ball mechanism, which is still found on trucks and utility vehicles. This is a variation on the older worm and sector design; the steering column turns a large screw (the "worm gear") which meshes with a sector of a gear, causing it to rotate about its axis as the worm gear is turned; an arm attached to the axis of the sector moves the pitman arm, which is connected to the steering linkage and thus steers the wheels. The recirculating ball version of this apparatus reduces the considerable friction by placing large ball bearings between the teeth of the worm and those of the screw; at either end of the apparatus the balls exit from between the two pieces into a channel internal to the box which connects them with the other end of the apparatus, thus they are "recirculated".

The rack and pinion design has the advantages of a large degree of feedback and direct steering "feel"; it also does not normally have any backlash, or slack. A disadvantage is that it is not adjustable, so that when it does wear and develop lash, the only cure is replacement.

The recirculating ball mechanism has the advantage of a much greater mechanical advantage, so that it was found on larger, heavier vehicles while the rack and pinion was originally limited to smaller and lighter ones; due to the almost universal adoption of power steering, however, this is no longer an important advantage, leading to the increasing use of rack and pinion on newer cars. The recirculating ball design also has a perceptible lash, or "dead spot" on center, where a minute turn of the steering wheel in either direction does not move the steering apparatus; this is easily adjustable via a screw on the end of the steering box to account for wear, but it cannot be entirely eliminated or the mechanism begins to wear very rapidly. This design is still in use in trucks and other large vehicles, where rapidity of steering and direct feel are less important than robustness, maintainability, and mechanical advantage. The much smaller degree of feedback with this design can also sometimes be an advantage; drivers of vehicles with rack and pinion steering can have their thumbs broken when a front wheel hits a bump, causing the steering wheel to kick to one side suddenly (leading to driving instructors telling students to keep their thumbs on the front of the steering wheel, rather than wrapping around the inside of the rim). This effect is even stronger with a heavy vehicle like a truck; recirculating ball steering prevents this degree of feedback, just as it prevents desirable feedback under normal circumstances.

The steering linkage connecting the steering box and the wheels usually conforms to a variation of Ackermann steering geometry, to account for the fact that in a turn, the inner wheel is actually traveling a path of smaller radius than the outer wheel, so that the degree of toe suitable for driving in a straight path is not suitable for turns.

Four-wheel steering (or all wheel steering) is a system employed by some vehicles to increase vehicle stability while maneuvering at high speed, or to decrease turning radius at low speed.

In most four-wheel steering systems, the rear wheels are steered by a computer and actuators. The rear wheels generally cannot turn as far as the front wheels.

Sports cars sometimes include 4-wheel steering for stability at high speeds. When performing an abrupt lane change at highway speeds, for example, a car with four-wheel steering will avoid rear suspension loading common in 2-wheel steering cars. Because the rear wheels steer in the same direction as the front wheels, the car is transitioned more gently into turning.

Alternatively, several systems (including Delphi's Quadrasteer and the system in Honda's Prelude line) allow for the rear wheels to be steered in the opposite direction as the front wheels during low speeds. This allows the vehicle to turn in a significantly smaller radius—sometimes critical for large trucks or vehicles with trailers.

All four wheels turn at the same time when you steer. There are controls to switch off the rear steer and options to steer only the rear wheel independent of the front wheels. At slow speeds (e.g. parking) the rear wheels turn opposite of the front wheels, reducing the turning radius by up to twenty-five percent, while at higher speeds both front and rear wheels turn alike (electronically controlled), so that the vehicle may change position with less yaw, enhancing straight-line stability. The "Snaking effect" experienced during motorway drives while towing a caravan is thus largely nullified. Four-wheel steering is popular in large farm vehicles and trucks.

General Motors offers Delphi's Quadrasteer in their consumer Silverado/Sierra and Suburban/Yukon. However, only 16,500 vehicles have been sold with this system since its introduction in 2002 through 2004. Due to this low demand, GM will not offer the technology on the 2007 update to these vehicles.

Previously, Honda had four-wheel steering as an option in their 1988-1994 Prelude, and Mazda also offered four-wheel steering on the 626 in 1988. Neither system was very popular, in that whatever improvement they brought to these already excellent-handling vehicles was offset by an unavoidable decrease in sensitivity caused by the increased weight and complexity.

Some vehicles now offer a form of "passive" four-wheel steering, where the bushings by which the rear suspension attaches to the automobile are designed to compress in a precise direction under the forces of steering, thus slightly altering the rear suspension geometry in such a manner as to enhance stability. 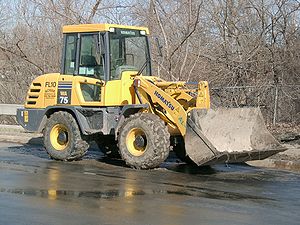 A front loader with articulated steering.

Articulated steering is a system by which a four-wheel drive vehicle is split into front and rear halves which are connected by a vertical hinge. The front and rear halves are connected with one or more hydraulic cylinders that change the angle between the halves, including the front and rear axles and wheels, thus steering the vehicle. This system does not use steering arms, king pins, tie rods, etc. as does four-wheel steering. If the vertical hinge is placed equidistant between the two axles, it also eliminates the need for a central differential, as both front and rear axles will follow the same path, and thus rotate at the same speed.

Power steering aims to make steering less strenuous for the driver. There are two types of power steering systems—hydraulic and electric/electronic. There is also a hydraulic-electric hybrid system possible.

The aim of steer-by-wire technology is to completely do away with as many mechanical components (steering shaft, column, gear reduction mechanism, etc.) as possible. Completely replacing conventional steering system with steer-by-wire holds several advantages, like:

· The absence of steering column simplifies the car interior design.

· The absence of steering shaft, column and gear reduction mechanism allows much better space utilization in the engine compartment.

· The steering mechanism can be designed and installed as a modular unit.

· Steering system characteristics can easily and infinitely be adjusted to optimize the steering response and feel.

For safety reasons all modern cars feature a collapsible steering column which will collapse in the event of a heavy frontal impact to avoid excessive injuries to the driver. This safety feature first appeared on cars built by General Motors after an extensive and very public lobbying campaign enacted by Ralph Nader.

Steering is crucial to the stability of bicycles and motorcycles (see article on bicycle).