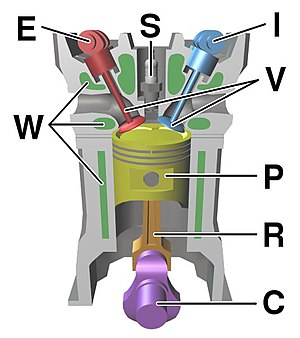 A reciprocating engine, also often known as a piston engine, is a heat engine that uses one or more pistons to convert pressure into a rotating motion. This article describes the common features of all types. The main types are the internal combustion engine used extensively in motor vehicles, the steam engine which was the mainstay of the industrial revolution and the niche application Stirling engine.

Common features in all types

There may be one or more pistons. Each piston is inside a cylinder, into which a gas is introduced, either already hot and under pressure (steam engine), or heated inside the cylinder either by ignition of a fuel air mixture (internal combustion engine) or by contact with a hot heat exchanger in the cylinder (stirling engine). The hot gases expand, pushing the piston to the bottom of the cylinder. The piston is returned to the cylinder top (Top Dead Centre) either by a flywheel or the power from other pistons connected to the same shaft. In most types the expanded or "exhausted" gases are removed from the cylinder by this stroke. The exception is the Stirling engine, which repeatedly heats and cools the same sealed quantity of gas.

In some designs the piston may be powered in both directions in the cylinder in which case it is said to be double acting.

In all types the linear movement of the piston is converted to a rotating movement via a connecting rod and a crankshaft or by a swashplate. A flywheel is often used to ensure smooth rotation. The more cylinders a reciprocating engine has, generally, the more vibration-free (smoothly) it can operate. The power of a reciprocating engine is proportional to the volume of the combined pistons' displacement.

A seal needs to be made between the sliding piston and the walls of the cylinder so that the high pressure gas above the piston does not leak past it and reduce the efficiency of the engine. This seal is provided by one or more piston rings. These are rings made of a hard metal which are sprung into a circular grove in the piston head. The rings fit tightly in the groove and press against the cyinder wall to form a seal.

It is common for such engines to be classified by the number and alignment of cylinders and the total volume of displacement of gas by the pistons moving in the cylinders usually measured in cubic centimeters (cm³). For example for internal combustion engines, single and two-cylinder designs are common in smaller vehicles such as motorcycles, while automobiles typically have between four and eight, and locomotives, and ships may have a dozen cylinders or more. Cylinder capacities may range from 10 cm³ or less in model engines up to several thousand cubic centimetres in ships' engines.

Cylinders may be aligned in line, in a V configuration, horizontally opposite each other , or radially around the crankshaft. Opposed piston engines put 2 pistons working at opposite ends of the same cylinder and this has been extended into triangular arrangements such as the Napier Deltic. Some designs have set the cylinders in motion around the shaft, see the Rotary engine.

In steam engines and internal combustion engines valves are required to allow the entry and exit of gasses at the correct time in the piston's cycle. These are worked by cams or cranks driven by the shaft of the engine. Early designs used the D slide valve but this has been largely superseded by Piston valve or Poppet valve designs.

Internal combustion engines operate through a sequence of strokes which admit and remove gases to and from the cylinder. These operations are repeated cyclically and an engine is said to be 2-stroke, 4-stroke or 6-stroke depending on the number of strokes it takes to complete a cycle.

In some steam engines the cylinders may be of varying size with the smallest bore cylinder working the highest pressure steam. This is then fed through one or more, increasingly larger bore cylinders successively, to extract power from the steam at increasingly lower pressures. These engines are called Compound engines.

Reciprocating engines that are powered by compressed air, steam or other hot gases are still used in some applications such as to drive many modern torpedoes or as pollution free motive power.

The Spanish designed Aircar uses compressed air stored in a cylinder to drive a reciprocating engine in a pollution free urban vehicle.

In torpedoes the gas, like that produced by high test peroxide or Otto fuel II, is pressurised without the need of combustion and therefore oxygen. This allows propulsion under water for considerable periods of time and over significant distances. e.g. see Mark 46 torpedo.

In most applications of steam power today, the piston engine has been replaced by the more efficient steam turbine.

The earliest known example of rotary to reciprocating motion is a waterwheel-powered pump engineered by Al-Jazari in the 13th century. The rotary motion of the waterwheel was converted into a reciprocating action to drive a pair of piston pumps.

One of the most advanced reciprocating engines ever made was the 28-cylinder, 3,500 hp (2610 kW) Pratt & Whitney R-4360 "Wasp Major" radial engine which powered the last generation of large piston-engined planes before the jet engine and turboprop took over from 1944 onward.