A trolley bus, powered by a pair of overhead wires. Similar trolley poles are used singularly on some tram (trolley) cars. Each pole is connected by a nonconductive cord to a self-winding wheel, allowing the slider or wheel on the end of the pole to be positioned on the wire by manipulating the cord.

A streetcar drawing current from a single overhead wire, returning current through the rails and ground

An electric locomotive, taking power through a pantograph

A passenger railroad, taking power through a third rail

An electric vehicle, or EV, is a vehicle with one or more electric motors for propulsion. The motion may be provided either by wheels or propellers driven by rotary motors, or in the case of tracked vehicles, by linear motors.

The energy used to propel the vehicle may be obtained from several sources:

The reasons that electric motors are a good choice to drive vehicles are that they can be finely controlled, they deliver power efficiently and they are mechanically very simple. Electric motors often achieve 90% conversion efficiency over the full range of speeds and power output and can be precisely controlled. Electric motors can provide high torque while an EV is stopped, unlike internal combustion engines, and do not need gears to match power curves. This removes the need for gearboxes and torque converters. Electric motors also have the ability to convert movement energy back into electricity, through regenerative braking. This can be used to reduce the wear on brake systems and reduce the total energy requirement of a typical trip. 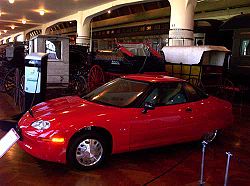 Personal highway-capable EVs are driven by tens of thousands of ordinary people worldwide. According to the (US) Electric Auto Association, as many as ten thousand full-sized electric cars are on American roads today. Most are converted to electric propulsion by owners or small shops, although several hundred of the several thousand (of eight EV models in the US) built by major automakers also survive, mostly Toyota RAV4 EV's and Ford Ranger EV's. The rest have been repossessed and crushed by their makers, including the General Motors EV1. Recently, a startup company, Tesla Motors has introduced a high-performace roadster using Li-On cells from laptop manufacturers to keep costs down. It boasts 0-60mph in 3-4 seconds with a range of 250 miles.

Most large electric transport is directly connected to stationary sources of energy through the grid. Due to the extra infrastructure and difficulty in handling arbitrary travel, most directly connected vehicles are owned publicly or by large companies. These forms of transportation are covered in more detail in maglev trains, metros, trams, trains and trolleybuses. A hypothetical electric vehicle design is Personal rapid transit, a cross between cars and trains optimised for independent travel.

In most systems the motion is provided by a rotary electric motor. However, some trains unroll their motors to drive directly against a special matched track. These are known as maglev trains, short for magnetic levitation, which float above the rails through magnetic force. This allows for almost no rolling resistance of the vehicle and no mechanical wear and tear of the train or track. Note that the levitation and the forward motion are independent effects: while the forward motive forces still require external power, although Inductrack achieves levitation at low speeds without any.

Another common form of chemical to electrical conversion is by electro-chemical devices. These include fuel cells and batteries. By avoiding an intermediate mechanical step, the conversion efficiency is dramatically improved over the chemical-thermal-mechanical-electrical-mechanical process already discussed. This is due to the higher carnot efficiency through directly oxidizing the fuel and by avoiding several unnecessary energy conversions. Furthermore, electro-chemical batteries conversions are easy to reverse, allowing electrical energy to be stored in chemical form.

Despite the higher efficiency, electro-chemical vehicles have been beset by many technical issues which have prevented them from replacing the more cumbersome heat engines. Heat engines have been easier to scale up, with the largest electrical generators always being driven by heat engines. Fuel cells are fragile, sensitive to contamination, and require external reactants such as hydrogen. Batteries require highly refined and unstable chemicals that could be harmful to the environment and must be recycled to minimize their impact and maximize their sustainability through material reuse. Both have lower energy and power density than heat engines. However, recent advances in battery efficiency, capacity, materials, safety, toxicity and durability are likely to allow their superior characteristics to be widely applied in car-sized EVs,

There have been a number of experiments using flywheel energy storage in electric vehicles. The flywheels store energy as rotation, which is converted to electricity via a generator, which then drives the wheel motors. It might seem odd to convert rotational energy to electrical energy, only to convert it back again to rotate the vehicle's drive wheels, but in fact it is a necessary step: In order to hold a useful amount of energy, flywheels need to spin extremely fast, and an electric generator is usually a more practical converter for this high speed rotational energy than a mechanical gearing system would be.

There are two commonly available electric vehicle designs for automobiles: Battery Electric Vehicles or BEVs, which convert chemical energy to electrical energy in batteries; and Hybrid vehicles, which convert chemical energy to electrical energy via an internal combustion engine and a generator. A third, less established form, is the 'plug-in hybrid' which attempts to combine the benefits of both these designs. It allows the moderate capacity batteries of a hybrid vehicle to be recharged not only from the internal combustion engine and generator, but alternatively from an external source of electricity (such as a domestic electricity supply).

File:Ed d22m.jpg
Edison and an electric car, 1913 (courtesy of the National Museum of American History)

Electric motive power started with a small railway operated by a miniature electric motor, built by Thomas Davenport in 1835. In 1838, a Scotsman named Robert Davidson built an electric locomotive that attained a speed of four miles an hour. In England a patent was granted in 1840 for the use of rails as conductors of electric current, and similar American patents were issued to Lilley and Colten in 1847. [3]

Between 1832 and 1839 (the exact year is uncertain), Robert Anderson of Scotland invented the first crude electric carriage, powered by non-rechargable Primary cells. [4]

By the 20th century, electric cars and rail transport were commonplace, with commercial electric automobiles having the majority of the market. Electrified trains were used for coal transport as the motors did not use precious oxygen in the mines. Switzerland's lack of natural fossil resources forced the rapid electrification of their rail network.

Electric vehicles were among the earliest automobiles, and before the preeminence of light, powerful internal combustion engines, electric automobiles held many vehicle land speed and distance records in the early 1900s. They were produced by Anthony Electric, Baker Electric, Detroit Electric, and others and at one point in history out-sold gasoline-powered vehicles.

The future of electric vehicles until recently seemed unimpressive due to their low driving range and short lifespan of batteries. However, recent technological advances have made electric vehicles more feasible.

There have been several developments which could bring back electric vehicles outside of their current fields of application, as scooters, golf cars, neighborhood vehicles, in industrial operational yards and indoor operation. First, advances in lithium-based battery technology, in large part driven by the consumer electronics industry, allow full-sized, highway-capable electric vehicles to be propelled as far on a single charge as conventional cars go on a single tank of gasoline. Lithium batteries have been made safe, can be recharged in minutes instead of hours, and now last longer than the typical vehicle. The production cost of these lighter, higher-capacity lithium batteries is gradually decreasing as the technology matures and production volumes increase.

Another improvement[5] was to decouple the electric motor from the battery through electronic control while employing ultra-capacitors to buffer large but short power demands and recuperable braking energy. The development of new cell types compared with intelligent cell management improved both weak points mentioned above. The cell management is not only able to monitor the health of the cells but by having a redundant cell configuration (one cell more than needed) and a sophisticated switched wiring it is possible to condition one cell after the other while the rest are on duty.

Range extending energy converters on board

Perhaps the most important point is that a monovalent operation (electric only) is no longer considered dogma. Plug-in hybrid electric vehicles can use an engine for longer trips. The use of fuel cells instead of internal combustion engines can create propulsion systems that are nearly emissions-free (regarding local emissions).

Some accuse the major automakers of trying to postpone or prevent the mass production of electric cars. These critics allege that this stems from their being heavily financially invested in today's dominant power technology, the internal combustion engine. At one time during emissions reductions regulations GM produced over 1,100 of their EV1 models, 800 of which were made available through 3-year leases. Upon the expiration of EV1 leases, GM crushed them. The reason for the crushing is not clear, but has variously been attributed to (1) the auto industry's successful challenge to California law requiring zero emission vehicles or (2) a federal regulation requiring GM to produce and maintain spare parts for the few thousands EV1s. A web site tracks crushing of other electric vehicles. A movie on the subject was made in 2005-2006, entitled Who Killed the Electric Car? was released theatrically by Sony Pictures Classics in 2006. The film explores the roles of automobile makers, oil industry, the US government, batteries, hydrogen vehicles, and consumers, and each of their roles in limiting the deployment and adoption of this technology.

The Benefits of Electric Vehicles

Electric vehicles have many benefits. Trolley busses and streetcars offer both low energy costs and low maintenance costs and their low pollution output is especially beneficial to the urban areas in which they are operated. Template:Fact

For electric automobile operators the high and unstable cost of motor fuel is avoided, instead paying a more stable and lower cost for the electricity they need to recharge their batteries Template:Fact. Even though the power output and lifespan of batteries is not sufficiently high at this time for wide application, battery technology and manufacturing methods are improving rapidly and practical and cost–effective production vehicles for many applications expected within a few years Template:Fact.

Furthermore, since the energy used by electric vehicles is generated at stationary sources, there is far more potential for the use of renewable energy for transportation. Electricity generated from wind, solar, and biomass energy could be used directly by power vehicles. This can be far more efficient than using energy converting biomass into ethanol, transporting it by tanker truck, and then burning it within an internal combustion engine Template:Fact.

Lifetime service costs are lower for a vehicle that is mainly electric Template:Fact. A Battery electric vehicle can also provide power to a home in the case of a power outage outage Template:Fact.