The four-stroke cycle (or Otto cycle) of an internal combustion engine is the cycle most commonly used for automotive and industrial purposes today (cars and trucks, generators, etc). It was invented by German engineer Nikolaus Otto in 1876. The four-stroke cycle is more fuel-efficient and clean burning than the two-stroke cycle, but requires considerably more moving parts and manufacturing expertise and the resulting engine is larger and heavier than a two-stroke engine of comparable power output. The later-invented Wankel engine has four similar phases but is a rotary combustion engine rather than the much more usual, reciprocating engine of the four-stroke cycle.

The cycle begins at top dead center, when the piston is at its topmost point. On the first downward stroke (intake) of the piston, a mixture of fuel and air is drawn into the cylinder through the intake (inlet) port. The intake (inlet) valve (or valves) then close(s), and the following upward stroke (compression) compresses the fuel-air mixture. 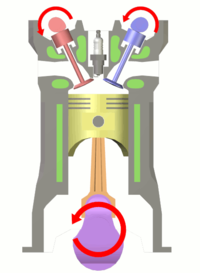 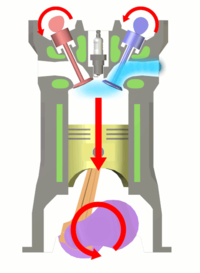 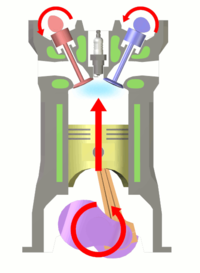 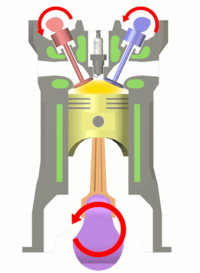 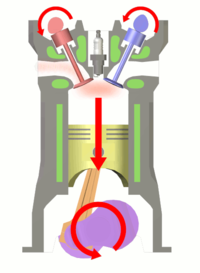 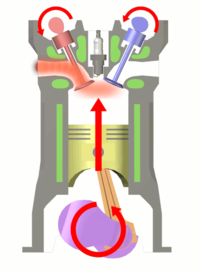 At high rotational speeds, consistent flow through the intake and exhaust ports is maintained by allowing the intake and exhaust valves to be open simultaneously at top dead center. The momentum of the exhausting gas maintains the outward flow and initiates the induction flow. The trick is to close the exhaust valve before much fresh mixture is drawn into the exhaust port. After ignition of the fuel/air charge, as the piston approaches bottom dead center, it becomes less useful to retain the hot, high-pressure gasses within the cylinder. To this end, the exhaust valve is typically opened at about twenty degrees of crankshaft rotation before bottom dead center. This allows the development of gas momentum in the exhaust port before the piston rises to push the gas out. The advantage of the extra time available for more complete exhaust of the cylinder outweighs the loss of the slight potential power in the still expanding gas.

As the piston ascends through the exhaust stroke, the intake valve will be opened, also approximately twenty degrees before top dead center. Ideally, the momentum of the exhaust flow will cause a lower pressure within the cylinder, pulling the fuel/air mixture in more easily. Consequently, both valves may be open simultaneously for a total of more than forty-five degrees of rotation, a technique called valve overlap. Under ideal conditions, the fresh fuel/air charge will push remaining exhaust gasses out the cylinder before the exhaust valve closes, leaving only a clean fuel/air mixture. Aiding the exhaust flow in this way is called scavenging. The disadvantage is lower fuel efficiency owing to the loss of fresh mixture into the exhaust port which can, however, serve the useful purpose of cooling the exhaust valve, an important consideration at high engine speeds, such as are experienced during races.

Exhaust noise and emissions equipment may impede smooth exhaust flow out of the cylinder. When exhaust ports are close together and feeding into a manifold, the pressure wave of another exhausting cylinder may interfere with the first, trapping exhaust gasses. The same effect occurs in an intake manifold, generally being too restrictive for optimum power production. Also, excessive pressure in the cylinder may cause an exhaust back-flow into the intake manifold when the intake valve opens. The internal pressure problems with an induction manifold can be overcome by using a carburetor or injector for each cylinder.

Accomplishing maximum volumetric efficiency for a given engine is not a formulaic process. Different intake and exhaust equipment is tested at different speeds and loads. The end result is always a compromise, and automobile manufacturers will usually choose the most cost effective solution.

The valves are typically operated by a camshaft, which is a rod with a series of projecting cams (lobes), each with a carefully calculated profile designed to push the valve open by the required degree at the right moment and to hold it open as required as the camshaft rotates. Between the valve stem and the cam is a tappet, a cam follower, which accommodates variations in the line of contact of the cam. In older engine designs, the cam shaft was in the crankcase and its motion transmitted by a push rod and rocker, the entire chain of parts being known as the valve train). The valve is held closed by a strong spring against the force of which the cam pushes to open it. Each valve is needed to open only once during the four-stroke cycle. Therefore, the camshaft makes one rotation for every two rotations of the crankshaft.

In the vast majority of four-stroke engines, the valves are closed simply by return springs. As the rotational speed of the engine increases, the time taken for the spring to pull the valve shut can become significant. The cam follower then fails to follow the closing profile of the cam, changing the timing and therefore the engine performance detrimentally. To reduce this, lighter valves and stronger springs are used, but there is a practical limit to how low the inertial mass of the valve can be reduced, and increasing the strength of the valve return spring greatly increases the already considerable wear on the camshaft.

The amount of power output generated by a 4-stroke engine is ultimately limited by piston speed. If piston speed exceeds a certain velocity, the rapid acceleration of the piston, and the inertia of the piston rings conspire to cause ring flutter, a condition that will instantly cause a decrease in output. The only way to decrease the piston speed of any given engine is to increase the bore (cylinder diameter), while decreasing the stroke. An engine where the bore dimension is larger than the stroke is commonly known as an oversquare engine, and such engines have the ability to attain high RPM. Conversely, an engine with a bore that is smaller than its stroke is an undersquare engine. Respectively, it cannot attain high RPM, but is liable to make more torque at low RPM. In addition, an engine with a bore and stroke that are the same is referred to as a square engine.