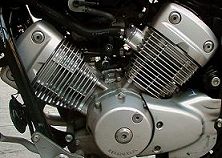 A V-twin is a two cylinder internal combustion engine where the cylinders are arranged in a V configuration.

In a true V-twin engine, for example Harley Davidson engines, the two cylinders share a single crank pin (also known as a journal) on the crankshaft, therefore the "twin" nomenclature. Two cylinder, V shaped engines with separate crank pins for each cylinder are more properly called "V-2" engines, however, proper identification of V-2 engines is uncommon. They are frequently referred to as V-twin engines, too, although this is technically incorrect.Template:Fact

The most obvious configuration for a V-twin is a 90°, in which counterweighting can balance the engine, in odd firing 90 degree Vees. This is seen in the Moto Guzzi and Ducati, but other angles can be seen like the 45° of the classic Harley-Davidson engine, the 75° Suzuki, the 52° Honda, the 80° Honda CX-500, the 47° Vincent, the 42° Indian, and the 60° Aprilia.

Both two-cylinder V engines are common on motorcycles. The engine can be mounted in transverse position like on Harley-Davidsons, Ducatis and many recent Japanese motorcycles. This transverse position gives the motorcycle a reduced frontal area. The main disadvantage of this configuration is that the rear cylinder and the front cylinder will receive different air-flows making air cooling somewhat problematic especially for the rear cylinder.

The longitudinal two-cylinder V as seen on Moto-Guzzis and some Hondas is less common. This position is well adapted to transmission shafting. When used in motorcycles, this approach has the slight disadvantage of causing a torque reaction that tends to lean the motorcycle slightly to one side. However, many motorcycle manufacturers have corrected for torque reaction by rotating the transmission input shafts and/or the balance and drive shafts opposite that of the crankshaft so that there is approximately equal mass turning clockwise and counterclockwise at any time, thereby physically canceling the effect.

The longitudinal V-twin motorcycle engine is the logical alternative to the flat-twin configuration. The flat-twin has better overall engine balance but is wider in profile. This requires the flat-twin to be mounted high on the motorcycle to avoid cylinder heads touching the ground in curve. On the other hand a V-twin could be mounted lower and could result in a lower center of gravity for the whole motorcycle.