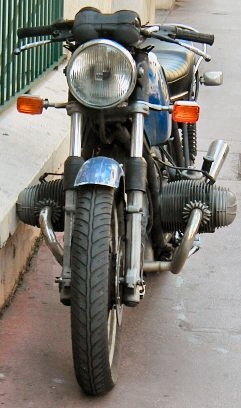 A 1967 BMW R50/2 longitudinally mounted flat-twin engine, with tank removed. Note that the cylinders are not truly in line but displaced by the width of one crank pin and one crank-shaft web.

A flat-twin is a two cylinder internal combustion engine with the cylinders arranged on opposite sides of the crankshaft. It is part of the class of flat engines, sub-type "boxer", and shares most characteristics of those engines.

BMW Motorrad manufactures a number of flat-twin engine motorcycles, as do Ural and Dnepr. The geometry gives good primary balance, but there is an unbalanced moment on the crankshaft caused by the pistons being offset from each other.

Flat-twin engine in a 1912 Douglas N3, with its cylinders mounted along the frame

The earliest flat-twin motorcycles, including Douglas in the United Kingdom, Helios of Germany, and Harley-Davidson of the United States, had their cylinders aligned along the frame, and therefore with the crankshaft running transverse to the frame. This position allowed the use of a conventional motorcycle drivetrain by belt or chain to the rear wheel. However, in this layout, the front cylinder is heavily cooled and the rear cylinder receives comparatively little cooling.

Rear engine of a Citroën Sahara

In 1919, ABC introduced a motorcycle with a flat-twin engine with the cylinders across the frame, and therefore with the crankshaft running longitudinally when referenced to the frame. To accommodate chain drive, the ABC used a bevel drive at the gearbox to change the direction of the drive through ninety degrees. (Wilson, H. The Encyclopedia of the Motorcycle p. 10 Dorling-Kindersley Limited, 1995 ISBN 0 7513 0206 6) The 1923 BMW R32 used a similar engine position with a drive shaft using bevel gears to power the rear axle.

Many motorcyclists appreciate the way the cylinders in this layout provide protection to the rider in the event of a collision or fall, and keeps their feet warm in cold weather.

A disadvantage of this layout is that it exposes the cylinders to the danger of collision damage.

Flat-twin engines were used in several economy cars, including the Citroën 2CV, the Panhard Dyna X and Dyna Z, Steyr-Puch 500, DAF Daffodil, BMW 600, several Jowett cars between World Wars I and II, and the Toyota Publica and Toyota Sport 800.