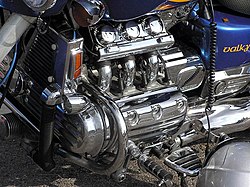 The flat-6 engine of the Honda Valkyrie motorcycle

A flat-6 or horizontally-opposed-6 is a flat engine with six cylinders arranged horizontally in two banks of three cylinders on each side of a central crankcase. The pistons are mounted to the crankshaft such that opposing pistons move back and forth in opposite directions at the same time, somewhat like a boxing competitor punching their gloves together before a fight, which has led to it being referred to as a boxer engine.

The configuration results in inherently good balance of the reciprocating parts, a low center of gravity, and a very short engine length. The layout also lends itself to efficient air cooling. However, it is an intrinsically expensive design to manufacture, and somewhat too wide for compact automobile engine compartments, which makes it more suitable for luxury sports cars, cruising motorcycles, and aircraft than ordinary passenger cars.

The shape of the engine suits it better for rear engine and mid-engine designs, where the low center of gravity is an advantage; in front engine designs the width interferes with the ability of the front wheels to steer. Only a few auto makers, including Porsche and Subaru, currently use horizontally opposed engines. Porsche continues to be the most prominent manufacturer of flat-6 engine luxury sports cars, while Subaru uses it in its all-wheel drive cars, where the difficulties of fitting the engine between the front wheels are offset by the efficiency of adding four-wheel drive to the layout. In the past a number of other manufacturers have used them, notably Preston Tucker in the 1948 Tucker Sedan and Chevrolet in the 1960s Corvair with flat-6 air-cooled engines. The Citroen DS was originally intended to be fitted with an air-cooled flat-6, but this never materialised.

The movement of the pistons in a horizontal engine is all in the same plane, so it creates less vibration than in a V-configuration engine; particularly one with an odd number of cylinders on each side of the engine, like a V6. Unlike the V6 but like the inline-6, the flat-6 is a fully balanced configuration which is in perfect primary and secondary balance. The three cylinders on each side of the crankcase tend to have an end-to-end rocking motion, like a pair of straight-3 engines, but in the usual boxer engine configuration, the imbalances on each side cancel each other, resulting in a perfectly smooth engine.

The flat-6 is also smoother than the flat-4 or inline-4 because the power strokes of the cylinders overlap in a four-stroke cycle engine. In these four-cylinder configurations, pistons are 180 degrees apart in crankshaft rotation and start their power strokes every 180 degrees, so each piston must come to a complete stop before the next one commences its power stroke. In the flat-6, each power stroke begins 120 degrees after the previous one starts, resulting in 60 degrees of overlap between power strokes and a much smoother delivery of power to the flywheel.

Lycoming developed a very successful series of flat-6 aircraft engines, as used in many Cessna aircraft. Continental Motors is another major manufacturer of flat-6 aircraft engines. Flat engines largely replaced the historically more popular radial engines in small aircraft after World War II because the radials, although they had good cooling, added large frontal area which caused too much drag. It was relatively easy to derive flat-6 and flat-8 engines from a flat-4 design by simply adding more cylinder pairs, and the engines could use many of the same components. The only problem is that in an air-cooled engine there can be cooling problems with the middle cylinder pairs. The flat-6 is more powerful and smoother than the flat-4 aircraft engine, although also more expensive. In the 1980s, Porsche adapted their 911 unit to become the Porsche PFM 3200 aero engine, but production ceased in 1991.

Flat-six engines are wide, and would restrict steering lock if placed in the conventional positions for front-engine drivetrain layouts. As a result, most flat-six automobile designs have been rear-engine or rear mid-engine designs, and have been subject to the limitations and drawbacks of these designs. The longest surviving flat-six engined model, the Porsche 911, is a rear-engined sports car with acceptably compromised interior room and a long history of suspension development to utilize the characteristics of the drivetrain layout.

Subaru, an automobile manufacturer with a history of making aircraft engines, has developed a front-engine configuration for use with its flat engines. The engine is mounted longitudinally ahead of the front axle and the transmission is mounted longitudinally behind the front axle. Although this layout is intrinsically more expensive to manufacture, less compact, and less space efficient for front wheel drive than a transverse V6, it allows the addition of four-wheel drive by taking power off both the front and back ends of the transmission, since the transmission is located between the front and rear axles. As a result of this unique layout, Subaru now specializes in all-wheel drive vehicles.

In 1988, after several years of manufacturing the Honda Gold Wing with a flat-four engine, Honda introduced the GL1500 with a flat-6 engine. This larger model lasted for 13 years before being replaced by the even-larger GL1800 in 2001.