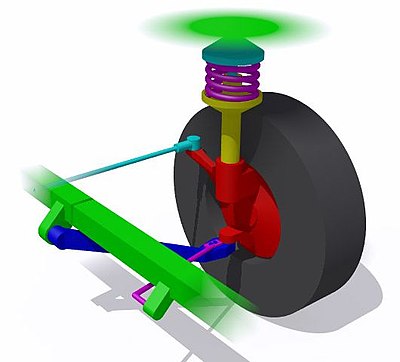 A simple MacPherson strut suspension on the left front wheel of a rear-wheel drive vehicle.

The MacPherson strut is a type of car suspension system widely used in modern vehicles, named after Earl S. MacPherson, an engineer who developed the design for the 1951 Ford Consul and later Zephyr. It can be used for both front and rear suspensions, but is usually found at the front, where it provides a steering pivot (kingpin) as well as a suspension mounting for the wheel. Rear struts of a similar design are properly called Chapman struts.

It consists of a small subframe (an A–arm) or a substantial link stabilized by a secondary link which provides a bottom mounting point for the hub or axle of the wheel. This subframe provides both lateral and longitudinal location of the wheel. The upper part of the hub is rigidly fixed to the inner part of the strut proper, the outer part of which extends upwards directly to a mounting in the body shell of the vehicle. This type of suspension is only used with monocoque (unitary) body construction since the upper mounting can be a reinforced portion of the inner wheel well. The strut will usually carry both the coil spring on which the body is suspended and the shock absorber, which is usually in the form of a cartridge mounted within the strut. The strut also usually has a steering arm built into the lower inner portion. The whole assembly is very simple and can be preassembled into a unit; also by eliminating the upper control arm, it allows for more width in the engine bay, which is useful for smaller cars, particularly with transverse oriented engines such as most front wheel drive vehicles have. For those reasons, it has become almost ubiquitous with manufacturers.

In addition to its simplicity and low manufacturing cost, it has few real vices with respect to handling, although a little geometric analysis shows that it cannot allow vertical movement of the wheel without some degree of either camber angle change, sideways movement, or both. It is not generally considered to give as good handling as A arms (wishbones), perhaps because it allows the engineers less freedom to choose camber change and roll center. The wheel tends to lean with the body, leading to understeer. Another drawback is that it tends to transmit noise and vibration from the road directly into the body shell, giving higher noise levels and a "harsh" feeling to the ride compared with systems such as double wishbones, requiring manufacturers to add extra noise reduction or cancellation and isolation mechanisms. Also, because of its greater size and robustness and greater degree of attachment to the vehicle structure, when the internal seals of the shock absorber portion wear out replacement is relatively expensive compared to replacing a simple shock absorber. However, despite the stated drawbacks the strut setup is still used on high performance cars such as the Ford Mustang, Porsche 911, all BMWs and several Mercedes-Benz models.