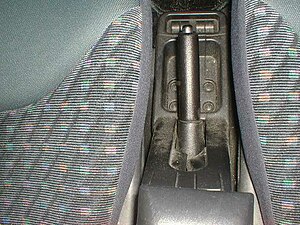 Brake warning light. The light is turned on, indicating that the brake is engaged.

In cars, the hand brake (also known as the emergency brake or park brake) is a supplementary system that can be used if the vehicle's primary brake system (usually hydraulic brakes) has a failure. Automobile e-brakes usually consist of a cable (usually adjustable for length) directly connected to the brake mechanism on one end and to some type of lever that can be actuated by the driver on the other end. The lever is most commonly a handle on the floor between the driver and front passenger (hence the hand brake name), or a pedal in the foot well in front of the driver. In the central handle configuration, the brake can be activated either by the driver or passenger (if the driver were to become unconscious, for instance). Traditionally, American car manufacturers (who more often sold cars with bench seats, thus requiring this configuration) were equipped with pedal activated emergency brakes, while non-American cars, which often had bucket seats, were equipped with a lever between the seats. While either configuration serves for parking brakes, the lever operated brake is preferred for use as an emergency brake, for assistance in starting on steep inclines (in manual transmission cars), or for initiating handbrake turns, as the release button can be held down to prevent the brake from latching; this is very difficult with the pedal operated configuration. 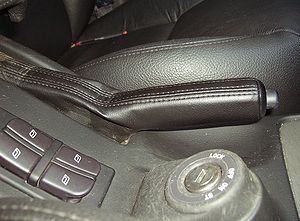 However, the most common use for an automobile emergency brake is to keep the vehicle motionless when it is parked, thus the alternative name, parking brake. Car emergency brakes have a ratchet locking mechanism that will keep them engaged until a release button is pressed. On vehicles with automatic transmissions, this is usually used in concert with a parking pawl in the transmission. Automotive safety experts recommend the use of both systems to immobilize a parked car, though many individuals use only the "Park" position on the automatic transmission and not the parking brake. Also, manual transmission cars are recommended to be left in in their lowest gear (usually either first or reverse) when parked, especially when parked on an incline. It should be noted, however, that increasing vehicle moving resistance may increase damage in the event of a crash - less momentum can be gained through the car rolling and hence more energy is transferred to the disfigurement of the crashed vehicles.

The difference between pedal and lever for activation of parking brakes was highlighted when NHTSA sued General Motors Corporation over the safety of their X-car family, GM's first attempt at front-wheel drive cars in the early 1980s (United States v. General Motors, 841 F.2d 400 (D.C. Cir. 1988)). The cars were initially designed to be five passenger models, with bucket seats and lever actuated parking brakes. However, a decision was made late in the design cycle to broaden the cars' possible purchasing appeal by offering them with bench seats, as six seaters; this necessitated a change from parking brake lever mounted between the seats to parking brake pedal. The pedal, however, did not have enough leverage to apply sufficient pressure to the rear brakes to hold the car on an incline, and without enough time to redesign the braking system the decision was made simply to use brake linings with a higher coefficient of friction instead, to hold the car with the pressure that could be applied through the parking brake pedal. However, this in turn had an undesirable effect; the increase in friction of the rear brakes, along with the (unusual for GM up to this time) excess forward weight distribution of a front wheel drive car and possibly GM's inexperience at the time with front wheel cars, led to a tendency for the rear wheels to lock up under braking, which led to the rear of the car slewing sideways and loss of directional control and/or spinning. The Court of Appeals eventually ruled against NHTSA and for GM, however, on the grounds that NHTSA's case for performance failure was based only on circumstantial evidence. The Center for Auto Safety includes the case as one of its Safety Research Reports; the index of the report is available here.

A parking brake cable which is unused for a long period of time may rust and seize, so that the brake will not be able to be actuated when it is eventually desired to do so. Conversely, in cold climates, a parking brake which is applied when there is some amount of water in the cable housing or in the mechanism may freeze when left for several hours, particularly overnight when temperatures drop, immobilizing the car when it is desired to restart it. It is recommended for this reason that when conditions are such as to make this a possibility, the parking brake be only partially applied, as it is relatively easy to break free of the ice by pulling the lever or pressing the pedal further, then releasing the brake, whereas the return/release spring does not have enough strength to do so by itself and there is no way to aid it in the release direction.

Historically, some cars with automatic transmissions were fitted with automatically releasing parking brakes. The parking brake would be released if the gear selector was placed in a forward or reverse gear. This automatic release system was eventually discontinued as a safety hazard, since there would be no protection against accidentally knocking the transmission into gear. Worse still, many North American-market Ford Motor Company cars from the late 1960s had a flaw in which, when the steering-column mounted shifter's bearings wore, the car could jump into reverse from park on its own. This and automatically releasing parking brakes were a deadly combination.

A number of production vehicles have been made with a separate drum brake on the transmission tailshaft. This has an advantage of being completely independent of other braking systems. As long as the drive train is intact (propeller shaft, differential, and axle shafts) this is effective. It is however, particularly dangerous when used in combination with a bumper jack at the rear of the vehicle if wheel block wedges are not used; jacking one rear wheel up will allow the differential to operate and the vehicle can roll off of the jack. This can be particularly dangerous if the wheel has been removed.

A recent variation is the electric parking brake. First installed in the 2003 Lincoln LS, electric brakes have since appeared in a number of vehicles, including the Audi A6 and A8, BMW 7 Series, Jaguar S-Type and XJ, and the 2006 Volkswagen Passat.

Two variations are available: In the more-primitive 'cable-pulling' type, an electric motor simply pulls the emergency brake cable rather than a mechanical handle in the cabin. A more advanced unit uses a computer-controlled motor attached to the brake caliper to activate it.

It is expected that these systems will incorporate other features in the future. BMW already has a system where the emergency brake initiates when the car stops and then goes off as soon as the gas pedal is pressed preventing the car from drifting. The vehicle operator can easily turn off the system.