Ackermann steering geometry is a geometric arrangement of linkages in the steering of a car or other vehicle designed to solve the problem of wheels on the inside and outside of a turn needing to trace out circles of different radii.

This engineering solution is attributable to Langensperger in 1816, but was patented by arrangement in London, in 1817, by Rudolph Ackermann, whose name stuck to it. The same idea was also developed in France in the late 1870s, by Bollee and Jeantaud. 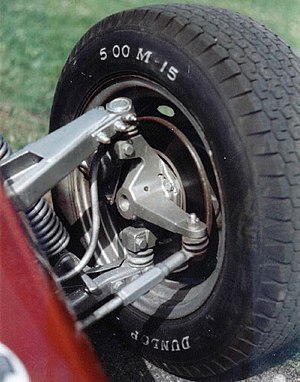 When a vehicle is steered, it follows a path which is part of the circumference of its turning circle, which will have a centre point somewhere along a line extending from the axis of the fixed axle. The steered wheels must be angled so that they are both at 90 degrees to a line drawn from the circle centre through the centre of the wheel. Since the wheel on the outside of the turn will trace a larger circle than the wheel on the inside, the wheels need to be set at different angles.

The Ackermann steering geometry arranges this automatically by moving the steering pivot points inward so as to lie on a line drawn between the steering kingpins and the centre of the rear axle. The steering pivot points are joined by a rigid bar, the tie rod, which can also be part of the, for example, rack and pinion steering mechanism. This arrangement ensures that at any angle of steering, the centre point of all of the circles traced by all wheels will lie at a common point.

Modern cars do not use pure Ackermann steering, partly because it ignores important dynamic and compliant effects, but the principle is sound for low speed manoeuvres.