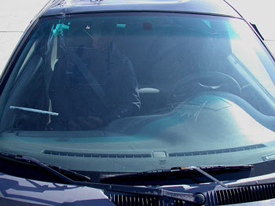 The windshield or windscreen of an aircraft, automobile, bus, motorcycle, or tram is the front window. Modern windshields are generally made of laminated safety glass, which consists of two curved sheets of glass with a plastic layer laminated between them for safety, and are glued into the window frame. Earlier windshields were made of toughened glass and were fitted in the frame using a rubber or neoprene seal.

Windshields protect the vehicle's occupants from wind, temperature extremes, and flying debris such as dust, insects, and rocks. Properly installed automobile windshields are also essential to safety; along with the roof of the car, they provide protection in the case of a roll-over accident in the vehicle.

Motorcycle windscreens are often made of high-impact acrylic plastic.

In many places, laws restrict the use of heavily tinted glass in vehicle windshields; generally, laws specify the maximum level of tint permitted.

In aircraft windscreens, a current is applied through a conducting layer of tin(IV) oxide to generate heat to prevent icing. A similar system for automobile windshields, introduced on Ford vehicles ("Quickclear") in the 1980s, uses very thin heating wires embedded between the two laminations.

Auto windscreens less than 20 cm in height are sometimes known as aeroscreens since they only deflect the wind. The twin aeroscreen setup (often called Brooklands) was popular among older sports and modern cars in vintage style.

In the USA, A windscreen refers to the mesh or foam screen placed over a microphone to minimize wind noise, while a windshield refers to the front window of a car. In the U.K. the meaning of these terms is exactly reversed.