A spoiler is an aerodynamic device attached to an automobile to decrease lift, decrease drag, or increase the amount of force pushing the vehicle's tires to the road surface (also called downforce). Spoilers are often fitted to race and high-performance sports cars, although they have become common on passenger vehicles, as well. Some spoilers are added to cars primarily for styling purposes and have either little aerodynamic benefit or even make the aerodynamics worse.

Spoilers generally work by disrupting the airflow going over a car. This disruption has two primary effects:

The result of these two effects is the same: increasing the force between the tire and the road surface, thereby increasing traction. This increase in traction allows a vehicle in motion to brake, turn, and accelerate more aggressively without tire slippage. Additionally, this is accompanied by an increase in aerodynamic drag.

In nearly all cases, downforce and drag increase as the speed of the vehicle increases. Thus, spoilers that are effective at very low speeds often generate excessive drag at high speeds, and spoilers that work well at high speeds are often ineffective while moving slowly. Some spoilers have adjustable components so they can be tuned. Formula One cars, for instance, feature different settings so the car can be optimized for short, low-speed tracks or larger, high-speed ones.

Although the most recognizable spoiler is the wing spoiler, there are actually many different types of spoilers.

Spoilers are fitted to the front and back of this Formula One car.

Spoilers are used extensively in automotive racing. Top Fuel drag racing cars feature massive spoilers on the back, whereas F1 cars feature spoilers on both the front and back of the vehicle. Rally cars are often equipped with smaller spoilers, similar to those seen on modern sports cars. Sprint cars have very large asymmetric spoilers designed for the comparatively low speeds seen at a sprint track. NASCAR stock cars have small roof and lid spoilers. 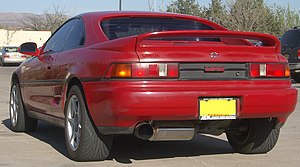 This Toyota MR2 sports car has a factory-installed rear spoiler.

Spoilers have become increasingly popular on consumer vehicles both for practical and styling reasons. Even four-door sedans that are not designed for performance can be purchased with a spoiler. Modern vehicles, which are almost always front-wheel drive, can see very little increase in performance from spoilers.