From WOI Encyclopedia Italia
Jump to navigation Jump to search
File:Hatchback.peugeot.2.arp.750pix.jpg
Peugeot 306 hatchback, with the hatch lifted and the parcel shelf tilted for access

Hatchback is term describing an automobile design, consisting of a passenger cabin with an integrated cargo space, accessed from behind the vehicle by a tailgate or flip-up window. The vehicle must have at least two rows of seats, with the rear set able to fold down to increase cargo space. Hatchback vehicles are functionally similar to station wagons (which are intended to carry large volumes), but distinguished by a smaller load area. Some vehicles acheive this by having little car length behind the C-Pillar and thus no room for a side window over the load area. Others acheive this by a steeply raked rear window - a style also known as a liftback. All liftbacks are hatchbacks with a fastback profile.

Small cars often incorporate a hatch tailgate to make the best use of available space. Especially in smaller models, hatchbacks are often truncated, with the tailgate nearly vertical, to reduce the car's footprint. This is an important consideration in countries where small streets and traffic congestion are factors. Hatchbacks frequently include fold-down rear seats, which enable a substantial portion of the interior space to be used as a cargo area. Usually, the rear seat can be folded partially (for instance 1/2, 1/3 or 2/3) or completely to expand the cargo space.

Hatchbacks typically have a parcel shelf: a rigid shelf covering the cargo space that is hinged behind the rear seats and lifts with the tailgate. An alternative is a flexible roll-up tonneau cover.

Understandably, since the term is an approximation, the credit for the first hatchback is claimed by several manufacturers.

The Citroën Traction Avant Commerciale, introduced in 1938, had a split tailgate, which was replaced by a one-piece design in 1954[1]. It was capacious but did not fit the desciption of a station wagon because of the short space behind the rear wheels.

Holden of Australia fitted what could be described as "hatch" tailgates Template:Fact onto its cars in the late 1940s.

The 1953 Aston Martin DB2/4 featured a top-hinged rear tailgate. Its successor, the 1958 DB Mark III, even offered a folding rear seat. However, since fewer than 700 DB2/4 and Mark III cars were built, the Aston Martin is not universally considered the first mass-produced hatchback car. The 1954 AC Aceca and later Aceca-Bristol from AC Cars had a similar hatch tailgate, though just 320 were built.

Some car enthusiasts argue that the Pininfarina-designed 1958 Austin A40 was the first car to introduce what is now regarded as the hatchback style. It introduced the lack of side windows over the load space. However, others argue that because its tailgate was split horizontally rather than in a single unit hinged at the top, it did not fully qualify as a hatchback. However, the 1962 Italian-built Innocenti version (A40S Combinata) introduced a single-unit tailgate, so that the car then had all the features of the modern hatchback. [2]

Two other early contenders are the 1949 Kaiser-Frazer Vagabond and Traveler hatchbacks. Although these were styled much like the typical 1940s sedan, they incorporated an innovative split rear tailgate instead of a trunk and folding rear seats. [3][4]

Supporters of the 1961 Renault 4 say that this was the first hatchback because its tailgate was a single door incorporating the window and hinged at the top. It had side windows between C & D-Pillars over the load space, as is typical of estate cars. The angle from roof to rear bumper is very steep. Neither was its top-hinged tailgate unique among estate cars of the time - the 1957 Vauxhall Victor, for example, also featured this type of tailgate. [5]. Some have even argued that the Renault was actually a very small station wagon.

Another car often credited with being the first hatchback is the Renault 16, which was voted European Car of the Year on its launch in the autumn of 1965. The first car launched by the then-new British Leyland (albeit a British Motor Corporation design) was the 1968 Austin Maxi, a five-speed, front-wheel drive hatchback. The first all-Italian hatchback was the Fiat 127, which went into production during 1971. The first German hatchback was the Volkswagen Passat (Dasher in North America) of 1973, followed by the much more popular Volkswagen Golf (Rabbit in North America) in 1974.

Sports cars like the Jaguar E-Type, Toyota 2000GT, and Datsun 240Z were fitted with rear tailgates, but had only one row of seats. Thus while they may be called 3 door cars, they are not generally considered hatchbacks.

In the 1970's, the Rover SD1, Renault 30, and Saab 900 attempted to introduce the hatchback style into the executive car market, with limited success. The market for executive class station wagons is also limited, possibly for similar reasons.

By the early 1980s, most family cars produced in Europe were hatchbacks. The 1980s began with the launch of two more front-wheel drive hatchbacks: the Ford Escort and Lancia Delta. More similar cars followed over the decade, including the updated Opel Kadett, Vauxhall Astra, Renault 19, Fiat Tipo and second generation Rover 200. Alfa Romeo's venture into this market, the Nissan-based Arna, was one of the few unsuccessful European small family hatchbacks of the 1980s.

The 1990s saw small family hatchbacks firmly pitch themselves as the most popular auto sector in Europe. The third generation Volkswagen Golf was launched in 1991 and elected European Car of the Year. Fiat replaced the successful Tipo with the distinctive Bravo (three-door) and Brava (five-door) in 1995. Ford replaced the long-running Escort with the dramatically styled Ford Focus in 1998. Hatchbacks quickly became regular winners of the European Car of the Year award.

In many countries from all regions of the world, where a hatchback and a conventional sedan is available for the same model, the sedan model is often preferred. Manufacturers have even been forced to offer a sedan version of cars that are sold only as hatchbacks elsewhere to comply with the preferences of local clients, as with the Citroën C-Triomphe.

Hathcbacks became commonplace in North America in the late 1960s and early 1970s as imports from Japan and new models from America's Big Three automakers started appearing in showrooms, which were soon followed by European imports. Chevrolet produced hatchback versions of its Nova, Vega, and Monza models, and Ford offered a Pinto "Runabout" hatchback in tandem with a trunked Pinto fastback. The European-built Ford Fiesta was added later in the decade. Chrysler was late in producing hatchbacks for the U.S., developing the Volkswagenesque Dodge Omni and Plymouth Horizon twins with its European operations and placing them on sale in North America in the 1978 model year. Two low-slung hatchback coupes, originally part of the Omni/Horizon lineup but later marketed as separate cars under the Dodge Charger and Plymouth Turismo names, debuted the following year. American Motors (AMC) joined the hatchback market at the start of the decade with America's first sub-compact, the AMC Gremlin that was styled in the Kammback fashion. AMC introduced a hatchback version to its larger Hornet models in 1973. This model was restyled and renamed the Concord while smaller version became the AMC Spirit in 1979. However, the far more characteristic AMC Pacer debuted in 1975. It was the first modern "cab-forward" vehicle design that focused on interior space with short and rounded overhangs. The Pacer's aerodynamic and jelly bean shaped hatchback stood out among the square, formal, box-type designs that were prevalant all the way through the early 1980s.

The 1980s brought a new round of hatchback models. Ford offered an Americanized version of its third-generation Escort in the United States as a replacement for the Pinto at the start of the 1981 model year. General Motors included a hatchback model as part of its J-car series (which included the Chevrolet Cavalier), but this car emphasized sportiness more than versatility. Chrysler continued making its Omni/Horizon and Charger/Turismo models into the 1980s and added the Dodge Shadow and Plymouth Sundance twins, which were styled to look like trunked sedans, for the 1987 model year. Most of the hatchbacks GM and Chrysler offered at this time were sport coupes; the Chevrolet Camaro and Pontiac Firebird, for example, adopted hatch windows when the third generation editions came out in 1982. American Motors, by then partially owned by Renault, added the Encore to its larger Alliance models in 1983. The Encore came in two and four-door hatchback models and it was based on the European Renault 11. These models were phased out after Chrysler bought out AMC in 1987.

Hatchbacks were popular in the U.S. and Canada during the fuel crises of the 1970s for their versatility and convenience, but many customers, especially Americans, preferred trunks to hatches. Conventional wisdom is that Americans have always found the styling of trunked cars more elegant and dignified than that of hatchbacks, and that they bought hatchbacks during times of high fuel costs because they had to. The poor quality and basic nature of many hatchbacks also gave them a reputation for cheapness. As hatchbacks grew in popularity in Europe in the 1990s, they declined in popularity in North America in that same period. Detroit manufacturers mostly switched to offering small cars with trunks; customers who wanted versatility began turning to sport utility vehicles as well as minivans. Volkswagen continued to offer the Golf (marketed with that name in North America from 1985 to 2006), but by the end of the 1990s the Japanese appeared to have given up on hatchbacks; the Toyota Tercel and Echo were available in the U.S. in notchback form only, and the base Honda Civic hatchback disappeared from Honda's North American lineup after the 2000 model year. By the early 2000s, the New York Times commented that hatchbacks were the automotive equivalent of sitcoms starring former "Seinfeld" cast members; "no one wants to be associated with them." 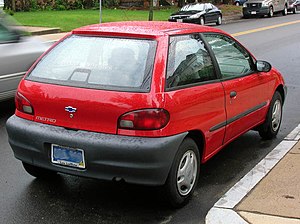 Ford and Volkswagen stubbornly held on to selling hatchbacks in North America, as Ford's Focus debuted in 2000 with a hatchback model and Volkswagen's fourth-generation Golf included the base three-door model that the previous car had lacked. By the middle of the two thousand zeroes, in fact, a hatchback resurgence seemed to have taken place in the United States; the BMW-built MINI Cooper was a success, and the big three Japanese automakers all offered hatchback models by 2006; Toyota had the Yaris, Nissan launched the Versa, and Honda debuted the Fit. Volkswagen, after an interminable delay, placed the fifth-generation Golf on sale in June 2006 with the Rabbit name once again, accompanied by a high-profile ad campaign designed to make the car seem as cool as the MINI Cooper has been. DaimlerChrysler replaced the trunked Dodge Neon with the Dodge Caliber, a five-door hatchback designed to look like a miniature SUV, and Ford was rumored to be preparing its second-generation Focus - already available in Europe - for a North American launch.

SUVs, station wagons and minivans often have the top-hinged tailgate that is one of the features of the hatchback car. However, the term hatchback is typically used in reference to small cars, with a smaller trunk than other vehicles.

Many sports and mid-sized cars are also designed using a variation of hatchback design, sometimes called a liftback. Here, the tailgate is angled down over the rear seats, and smoothly integrated into the tail of the car, resembling a fastback or sedan overall. This often improves aerodynamic performance, resulting in a reduced drag coefficient. Examples of these cars are the Opel Vectra, the Ford Mondeo and the Renault Laguna.

Saab often used the term combi coupé (or 'Waggonback' in the U.S.) for their take on the concept. Even some typical-looking sedans (saloons) have hatch tailgates, such as the Mazda6, Hyundai Elantra, Kia Spectra and the Saab 9000.