Usual engines are 1.6 L or 2.0 L straight-4s, either petrol or Diesel, with a range between 100 bhp and 150 bhp. Some models also have economical 1.4 L units. High-performance versions, called hot hatches, may have turbocharged 2.0 L engines, or even V6 3.2 L units, ranging maximum outputs from 170 bhp to 260 bhp. Popular small family cars are the Ford Focus, Opel Astra, Peugeot 307, Renault Mégane and Volkswagen Golf. 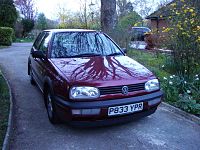 After the Second World War, European manufacturers usually featured two vehicle types: small cars (or superminis) and large saloons. In the 1960s, some brands found that many middle class buyers wanted something larger than superminis, and built small family cars. These were usually saloons, with the first successful hatchback in this class being the 1974 Volkswagen Golf, which moved the layout of the smaller supermini Renault 5 to this segment. This proved popular and by the end of the decade, several other manufacturers launched hatchbacks like the Fiat Ritmo, Citroën GSA, Renault 14, and Opel Kadett.

The 1980s began with the launch of two more front-wheel drive hatchbacks: the Ford Escort Mk III and the Lancia Delta. More similar cars followed over the decade, including the updated Opel Kadett, Renault 19, Fiat Tipo and second generation Rover 200. Alfa Romeo's venture into this market, the Nissan-based Arna, was one of the few unsuccessful European small family hatchbacks of the 1980s.

The 1990s saw small family cars firmly pitch themselves as the most popular class of car in Europe. The Volkswagen Golf Mk III was launched in 1991 and elected European Car of the Year. Citroën replaced the GSA with the large family car BX and later the small family car ZX. The ZX's chassis spawned the Peugeot 306 in 1993. Fiat replaced the successful Tipo in 1995 with the distinctive Bravo and Brava (three-door and five-door hatchbacks, respectively). Later, Ford dropped the Escort name and released in 1998 the dramatically-styled and all-new Ford Focus.

Some small family cars have also spawned compact MPVs, the first of which was the 1996 Renault Scénic. The Opel Zafira, Citroën Picasso, Ford Focus C-Max, Volkswagen Touran and Fiat Multipla followed and are becoming increasingly popular. In few years they outsold estates and saloons in many countries. A more recent trend is to build coupé cabriolets with components from these vehicles. Examples of this are the Peugeot 307, Opel Astra TwinTop, Renault Mégane CC and Volkswagen Eos.