The Fiat Tipo is a small family car designed by the IDEA design house and produced by the Italian manufacturer Fiat between 1988 and 1995.

The Tipo was initially available only as a five-door hatchback. The car was made entirely out of galvanized body panels to avoid rust, and was built on a completely new Fiat platform, that was later used on Fiat, Alfa-Romeo and Lancia models. It also stood out, because of its boxy styling that gave it innovative levels of packaging - rear passenger room being greater than that in a rear wheel drive Ford Sierra, but in a car that was of a similar size to the smaller Ford Escort. The only car with comparable packaging efficiency was the outdated Austin Maestro. For 1989, the Tipo won the European Car of the Year award.

The car has been extremely popular in Brazil. It outsold the Volkswagen Gol, which had been the best-selling Brazilian car for over 20 years. Just the Tipo, the Fiat Mille and Fiat Palio have outsold the Gol.

Initially base (i.e.), DGT, S, SX and 16v trim levels were available. Power from 58 to 148 bhp came from 1.1, 1.4, 1.6, 1.8, 1.8 16v, 2.0, 2.0 16v petrol engines as well as a 1.7 diesel, 1.9 diesel and 1.9 turbo-diesel. The 1.1L base engines were widely regarded as underpowered for the car, which was roomy for five adults with above average equipment. As top of the range was the 2.0 sedicivalvole (16v). The diesels were less refined and more smoky than the class leading Peugeot XUD engines, however the TD was a particularly lively performer, and the diesels were developed to be class competitive by the end of the Tipo production. The Tipo was facelifted in 1993 and saw the addition of a three-door version, minor exterior changes (the two evolutions of the car can be differentiated by their slightly different radiator grilles and headlamps) and improved specification; safety features like stiffer bodyshells, driver's airbag and side impact bars were added to the range. This saw new S, SX and SLX trim levels, as well as a new 2.0 8v GT model.

In Brazil, it only started to be produced that year, in a single trim, with a 1.6 8V engine with multipoint fuel injection, which offered a 10 PS increase compared to the old 1.6 ie, raising the power to 92 PS. Previously, the Tipo was imported from Italy and was available with three different trims that were closely associated with its engines: the basic 1.6 ie, the luxurious 2.0 8V and the sporty 2.0 16V Sedicivalvole. The Sedicivalvole gained its engine from the Lancia Thema, and with a much smaller and lighter bodyshell to house it, this power unit brought superb performance and handling, and a top speed of around 130 mi/h which made it faster than the Volkswagen Golf GTI of that era.

It was a reasonably strong seller in the UK, initially winning plaudits for its innovative and practical design as well as its good handling. The 1.1L version was not available in the UK - the 1.4L was the base model. The digital dashboard of higher models proved to be controversial and unreliable. The car launched into a favourable market in the UK, where none of the "big three" carmakers (Ford, Vauxhall and Austin Rover) had launched a new car of this size since 1984. However, these three marques all had new Tipo-sized products within three years, and increased competition reduced sales. The final two years 1994/95 saw a significant increase in sales but, they were mostly of the competitively priced 1.4L models.

The Tipo platform spawned five more cars. The first of these was the Lancia Dedra sedan in 1989, followed by the Fiat Tempra in 1990. The large family car Alfa Romeo 155, the coupé Fiat Coupé and the Lancia Delta Nuova were introduced in 1993. 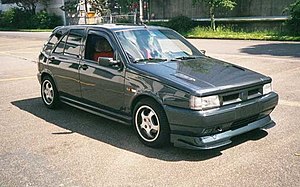