In a reciprocating piston engine, the connecting rod or conrod connects the piston to the crank or crankshaft. 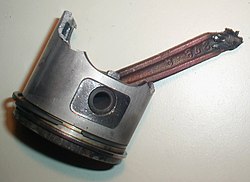 Failure of a connecting rod is one of the most common causes of catastrophic engine failure.

In modern automotive internal combustion engines, the connecting rods are most usually made of steel for production engines, but can be made of aluminium (for lightness and the ability to absorb high impact at the expense of durability) or titanium (for a combination of strength and lightness at the expense of affordability) for high performance engines, or of cast iron for applications such as motor scooters. They are not rigidly fixed at either end, so that the angle between the con rod and the piston can change as the rod moves up and down and rotates around the crankshaft.

The small end attaches to the piston pin, gudgeon pin (the usual British term) or wrist pin, which is currently most often press fit into the con rod but can swivel in the piston, a "floating wrist pin" design. The big end connects to the bearing journal on the crank throw, running on replaceable bearing shells accessible via the con rod bolts which hold the bearing "cap" onto the big end; typically there is a pinhole bored through the bearing and the big end of the con rod so that pressurized lubricating motor oil squirts out onto the thrust side of the cylinder wall to lubricate the travel of the pistons and piston rings.

The con rod is under tremendous stress from the reciprocating load represented by the piston, actually stretching and relaxing with every rotation, and the load increases rapidly with increasing engine speed. Failure of a connecting rod is one of the most common causes of catastrophic engine failure in cars, frequently putting the broken rod through the side of the crankcase and thereby rendering the engine irreparable; it can result from overheating, fatigue near a physical defect in the rod, lubrication failure in a bearing due to faulty maintenance, or from failure of the rod bolts from a defect, improper tightening, or re-use of already used (stressed) bolts where not recommended. Despite their frequent occurrence on televised competitive automobile events, such failures are quite rare on production cars during normal daily driving. This is because production auto parts have a much larger factor of safety, and often more systematic quality control.

When building a high performance engine, great attention is paid to the con rods, eliminating stress risers by such techniques as grinding the edges of the rod to a smooth radius, shot peening to relieve internal stress, balancing all con rod/piston assemblies to the same weight and Magnafluxing to reveal otherwise invisible small cracks which would cause the rod to fail under stress. In addition, great care is taken to torque the con rod bolts to the exact value specified; often these bolts must be replaced rather than reused. The big end of the rod is fabricated as a unit and cut or cracked in two to establish precision fit around the big end bearing shell. Therefore, the big end "caps" are not interchangeable between con rods, and when rebuilding an engine, care must be taken to ensure that the caps of the different con rods are not mixed up. Both the con rod and its bearing cap are usually embossed with the corresponding position number in the engine block.

Recent engines such as the Ford 4.6 liter engine and the Chrysler 2.0 liter engine, have connecting rods made using powder metallurgy, which allows more precise control of size and weight with less machining and less excess mass to be machined off for balancing. The cap is then separated from the rod by a fracturing process, which results in an uneven mating surface due to the grain of the powdered metal. This ensures that upon reassembly, the cap will be perfectly positioned with respect to the rod, compared to the minor misalignments which can occur if the mating surfaces are both flat.

A major source of engine wear is the sideways force exerted on the piston through the con rod by the crankshaft, which typically wears the cylinder into an oval cross-section rather than circular, making it impossible for piston rings to correctly seal against the cylinder walls. Geometrically, it can be seen that longer con rods will reduce the amount of this sideways force, and therefore lead to longer engine life. However, for a given engine block, the sum of the length of the con rod plus the piston stroke is a fixed number, determined by the fixed distance between the crankshaft axis and the top of the cylinder block where the cylinder head fastens; thus, for a given cylinder block longer stroke, giving greater engine displacement and power, requires a shorter connecting rod (or a piston with smaller compression height), resulting in accelerated cylinder wear.

In certain types of engine, master/slave rods are used rather than the simple type shown in the picture above. The master rod carries one or more ring pins to which are bolted the much smaller big ends of slave rods on other cylinders. Radial engines typically have a master rod for one cylinder and slave rods for all the other cylinders in the same bank. Certain designs of V engines use a master/slave rod for each pair of opposite cylinders. On the other hand, some V engines use simple rods side by side on a single crankpin, or separate crankpins for each cylinder.

In a steam locomotive, the crank pins are often mounted directly on one or more pairs of driving wheels, and the axle of these wheels serves as the crankshaft. The connecting rods, also called the main rods, run between the crank pins and crosshead bearings, where they connect to the piston rods. Crosshead rod systems are also used on large diesel engines manufactured for marine service.