Radial engine of a biplane.

Radial engine in a cut-away view.

A radial engine from Continental engine is ready for installation, 1944

A radial piston engine from Continental engine is torn down after testing, 1944 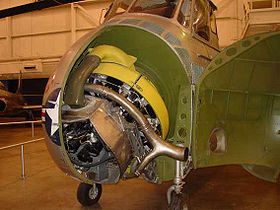 The radial engine is a configuration of internal combustion engine, in which the cylinders are arranged pointing out from a central crankshaft like the spokes on a wheel. This configuration was formerly very commonly used in aircraft engines before being superseded by turboshaft and turbojet engines.

The cylinders are connected to the crankshaft with a master-and-articulating-rod assembly. One cylinder has a master rod with a direct attachment to the crankshaft. The remaining cylinders' connecting rods have pinned attachments to rings around the edge of the master rod (see animation below). Four-stroke radials almost always have an odd number of cylinders, so that a consistent every-other-piston firing order can be maintained, providing smooth running.

For aircraft use the radial has several advantages over the inline design. With all of the cylinders at the front of the engine (in effect), it is easy to cool them with airflow. Inlines require a cooling fluid to remove heat or complicated baffles to route cooling air, as the rear-most cylinders receive little airflow. Air cooling saves a considerable amount of complexity, and also reduces weight to some degree.

In addition the radial is far more resistant to damage; if the block cracks on an inline that entire cylinder bank will lose power, but the same situation on a radial will often only make that individual cylinder stop working.

These sorts of advantages – light weight and reliability – suggest that the radial layout is a natural fit for aircraft uses. However the radial design also has two important disadvantages. One is that any supply of compressed air (from a turbocharger or supercharger) has to be piped around the entire engine, whereas in the inline only one or two pipes are needed, each feeding an entire cylinder bank. The other disadvantage is that the frontal area of the radial is always much larger than the same displacement inline, meaning that the radial will often have greater drag. For a low-speed plane this is not very important, but for fighter aircraft and other high-speed needs, this was initially a "killer problem," but was mitigated significantly with the introduction of the NACA cowling in the late 1920s. The large frontal area combined with the durability of radial engines proved advantageous to fighter aircraft at times though, particularly those in the attack role where the engine would act as an additional layer of armor for the pilot.

The debate about the merits of the radial vs. the inline continued throughout the 1930's, with both types seeing at least some use. The radial tended to be more popular largely due to its simplicity, and most navy air arms had dedicated themselves to the radial because of its improved reliability (very important when flying over water) and lighter weight (for carrier takeoffs).

In the mid-1930s a new generation of highly streamlined high-speed aircraft appeared, along with more powerful V-type engines like the Rolls-Royce Merlin and Daimler-Benz DB 601. This re-opened the debate anew, with the needs of streamlining often winning out. However the Focke-Wulf Fw 190 and Lavochkin La-5 showed that a radial engine fighter could compete with the best of the inlines, given a proper installation. From that point on many new designs used radials, and after the war the inlines quickly disappeared from the now-smaller aircraft market.

Originally radial engines had but one bank of cylinders, but as engine sizes increased it became necessary to add extra banks. Most did not exceed two banks, but the largest radial engine ever built in quantity, the Pratt & Whitney Wasp Major, was a 28-cylinder 4-bank radial engine used in many large aircraft designs in the post-World War II period. USSR also built a limited number of Zvezda 42-cylinder diesel boat engines featuring 7 banks of 6 cylinders each, bore of 160 mm (6.3 in), stroke of 170 mm (6.7 in), and total displacement of 143.5 liters (8,756 in³). The engine produced 4,500 kW (6,030 hp) at 2,500 rpm.

While the vast majority of radial engines have been produced for gasoline fuels, Nordberg Manufacturing Company of the USA developed and produced a series of large radial diesel engines from the 1940s. Designed initially for electricity production in aluminium smelters, these engines differed from the norm of radial design in having identical connecting rods in all cylinders, lacking the master/slave rod usually found. The engine design also permitted even numbers of cylinders in a single rank with the cylinders being fired in consecutive order. The engines were a two-cycle design and were also available in a dual-fuel gas/diesel model. A number of powerhouse installations utilising large numbers of these engines were made in the US. [1]