A single cylinder engine, colloquially known as a one-lunger, is an engine configuration consisting of just one cylinder, the simplest arrangement possible for an Otto or Diesel engine. The mounting can be standing, lying or angled.. 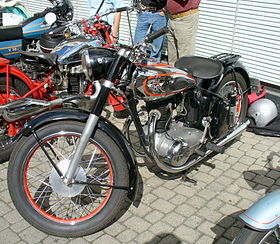 Some early automobiles, such as the Cadillac 1906 Model K and 1907 Models L and M used single-cylinder engines [1]. Single cylinder engines were also popular at one time for marine uses (see external links, below). Today the most common configuration is the 50cc-two-stroke Otto seen in so many bikes and scooters. These vehicles allowed the first mass-motorisation in many countries. Most engines used in small portable appliances, such as chainsaws, generators and domestic lawn mowers, usually have one cylinder. Also, the one-lunger is used in working vehicles, motorsports, airplanes, and as an industrial motor.