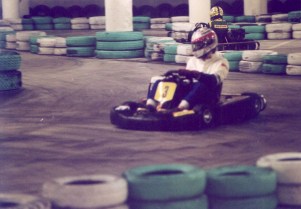 Kart racers race each other on an outdoor track

Kart racing (as the word is so spelled by enthusiasts) or karting is a variant of open-wheeler motor sport with simple, small four-wheeled vehicles called karts, go-karts, or gearbox/shifter karts depending on the design. By definition a kart must have no suspension (relying on chassis flex), and no differential (solid back axle). They are usually raced on scaled-down tracks, but are sometimes driven as entertainment or as a hobby by non-professionals. Karting is commonly perceived as the stepping stone to the higher and more expensive ranks of motorsports. Karts were initially created in the United States in the 1950s post-war period by airmen as a way to pass spare time. Art Ingels is generally accepted to be the father of karting. He built the first kart in Southern California in 1956. Karting has rapidly spread to other countries, and it currently has a large following in Europe. Karts vary in speed and some can reach speeds exceding 160mph. A TKM kart with a 100cc 2 stroke engine and an overall weight including the driver of 145 kilograms, can accelerate from 0-60mph in under 4.5 seconds, and has a top speed of 75mph. It has a better power to weight ratio than a Ferrari F50. A kart like this can be driven by race licence holders over the age of 11.

The chassis, a very important element of the kart because it must be flexible enough to work as a suspension and stern enough not to break or give way on a turn. If the chassis were not this way, the grip of the rear wheels would exceed the grip of the fronts, and the kart would not turn in to the corner. Kart chassis are also classified as 'open,' 'caged,' 'straight,' or 'offset.' Caged karts have a roll cage surrounding the driver, and open karts have no roll cage. Caged karts are not used in Europe. In straight chassis the driver sits in the center, but in offset chassis the driver sits on the left side. Straight chassis are used for sprint racing and offset chassis are used for speedway racing.

The stiffness of the chassis enables different handling characteristics for different circumstances. Typically, for dry conditions a stiffer chassis is preferable, while in wet or other poor traction conditions, a more flexible chassis is better for some karts. For other classes / driving styles, there will be stiffening bars on the kart which are done up tightly for dry and loosened to give more flex for wet conditions. Further complications can be added by changing floor pan materials / fastenings to change the effective stiffness of the chassis.

While hobby go-karts depend on gravity for propulsion (these can be called soap-box carts or billy karts), racing karts use a small engine. Several types are available, as well as differing fuel options. Gasoline 2-stroke or 4-stroke engines are the most common type, but other types of propulsion are available:

4-stroke engines are typically standard lawn mower engines, sometimes with small modifications, developing from about 5 to 20 hp (4 to 15 kW). Briggs & Stratton, Tecumseh, Kohler, Robin, and Honda are manufacturers of such engines. They are plenty adequate for racing and fun cart applications.

Karts do not have a differential. The lack of a differential means that one rear tyre must slide while cornering. This is achieved by designing the chassis so that the inside rear tyre lifts up slightly when the kart turns the corner. This allows the tyre to slide and lose some of its grip or lift off the ground completely, sometimes 3 or 4 inches from the ground depending on the corner, chassis setup or driving style. Recreational karts have fixed gearing, which in part, determines their top speed. They are usually limited to about 60 mph (100km/h) for sprint karts and about 105 mph (160 km/h) for enduro karts. In the very early days karts were direct drive, but the inconvenience of that setup soon led to the centrifugal clutch for the club level classes. At first the clutches were "dry", but the oil bath or "slipper" clutch became common later. These slipper clutches allow the high rpm kart engines to stay higher on their power curve at low speeds, and produce impressive acceleration as they engage. Another method of transmission is the torque converter. It is mainly used in fun cart set ups, but can be successfully used in karts built for racing. The torque converter works where there is a belt on two pulleys, and when RPMs increase, the belt moves higher and higher in the groove of the one pulley, and gradually making the gear ratio bigger.

However, the top international classes still use direct drive engines, the reasoning being that at this level drivers should be good enough to stay on the track during the race and hence not need to restart their karts. Unclutched engines will be used at this level until 2007 when the rules will change.

More serious kart racers in the USA prefer shifter karts, which have a six-speed manual transmission and a clutch to make better use of the more powerful engine. Some of these gearboxes are operated with wheel-mounted paddles. In Europe, competitive kart racers tend to prefer fixed gear 100 cc or 125 cc machines although shifters of 125 cc, 250 cc and occasionally 210 cc are also raced. Typical top speeds of racing karts are around 105 mph (160 km/h) for fixed gear and in excess of 160 mph (260 km/h) for the best shifters.

Wheels and tires are much smaller than those used on a normal car. Similar to other motorsports, kart tyres have different types for use appropriate to track conditions:

Tires are sometimes prepared with special solvents to soften them and increase grip, however this is banned by many racing organizations. These solvents typically affect the behavior of the tire temporarily and are most often destructive to the rubber. The tire can support acceleration round corners at 2 G (20 m/s²), depending on chassis, engine, and motor setup.

Kart racing is generally accepted as the most economic form of motorsport available. As a free-time activity, it can be performed by almost anybody, and as a motorsport in itself, it is one of the sports regulated by FIA (under the guise of CIK), permitting licensed racing for anyone from the age of 8 onward. In the USA there is not as much FIA involvement, instead the IKF (International Kart Federation) and WKA (World Karting Association) regulate racing.

A variety of kart circuits permit the sport to be practised, although only homologated ones can have official races.

Typically, race formats are one of the following:

The sprint format is a series of short-duration races, normally for a small number of laps, that qualify for a final, with a variety of point scoring calculations to determine the event's overall winner. Typical duration does not normally exceed 15 minutes. Here, speed and successful passing is of the most importance. It normally occurs in the format of three qualifying heats and a final race for trophy positions.

The FIA championships, including the Karting World Championship, take place in this format.

Endurance races last for an extended period, from 30 minutes up to 24 hours or more, for one or more drivers. In general, consistency, reliability, and pit strategy is of greater importance than all out speed. The US based company Endurance Kartingis organizing 1.5 hour - 24 hour races both in the US and Europe.

Speedway karts are sprint karts evolved into a specialized form of kart for left-turn-only racing competition. LTO chassis have been developed for precise handling and adjustability specifically for oval and tri-oval tracks. Speedway kart feature races range in length from 4 laps, for a trophy dash, to 20 laps, for a main event. The two chief racing formats used in dirt speedway karting are heat races and qualification by an individual’s timed laps. IKF (International Karting Federation, IKF) runs a racing format of two ten-lap heats followed by one twenty lap feature. Your finishing positions in the two heat races are used to calculate your starting position for the feature race. The World Karting Association (WKA, WKA) uses first round qualifying, preceded only by second round qualifying if number of kart entries requires it, and finally a 20 lap feature event. Karts equipped with transponders are sent out onto the track in groups of 5 or less, spread out on the track, to try to achieve the fastest time around the track. Features positions are determined by your qualifying time. Due to full course yellow flags, which to do not count toward lap totals, races can last as long as 30 minutes. Speedway racing takes place on both asphalt and clay tracks, which are normally between 1/6 mile and ¼ mile long. The majority of tracks are 1/5 mile long though and primarily consist of four corners, which creates an oval shape; however, few tracks are symmetric. Oftentimes, the shape parallels that of an egg or a tri-oval. Speedway racing emphasizes chassis set-up and environment wise tyre selection. Formal competitive classes begin at the junior level which starts at age 7 or 8 and generally run in 3-year age groupings or weight divisions until “senior” status is reached at age 15 or 16, (depending on the series).

There are many different classes or formulae in karting. The FIA sanctions international championships in JICA, Intercontinental A, Formula A, Intercontinental C, Super ICC and Superkart Division 1 and Division 2. These are regarded as the top levels of karting and are also raced in national championships. The world Championship is also decided here. The current world champion is Oliver Oakes from the UK, who currently in 2006, is racing in the Formula BMW UK Championship, for Carlin Motorsport.

Many people race in Spec series such as Rotax Max (a Touch-and-Go class), Formula TKM or those using the Yamaha KT100 engine, and Cadet classes for ages 8 to 12 are usually popular.

In the United States, the biggest proportion of racers are in the dirt oval classes which often use Briggs & Stratton industrial engines.

In Australia, Classes include Midget, Rookie, Junior and Senior.

Karting as a learning tool

Kart racing is usually used as a low-cost and relatively safe way to introduce drivers to motor racing. Many people associate it with young drivers, but adults are also very active in karting. Karting is considered the first step in any serious racer's career. It can prepare the driver for high-speed wheel-to-wheel racing by helping develop quick reflexes, precision car control, and decision-making skills. In addition, it brings an awareness of the various parameters that can be altered to try to improve the competitiveness of the kart (examples being tyre pressure, gearing, seat position, chassis stiffness) that also exist in other forms of motor racing. Racing schools such as the Bondurant Kart Racing Schooland Endurance Karting School have come along to teach these novice and advanced karters.

As well as "serious" competitive kart racing, many commercial enterprises offer casual hire of karts. Such karts are usually powered by small, detuned four-stroke engines and are far slower than the fully-fledged competitive versions.

Many, perhaps most Formula One racers grew up racing karts, most prominent among them Michael Schumacher, Ayrton Senna, Alain Prost, Fernando Alonso and Kimi Räikkönen. Many NASCAR drivers also got their start in racing from karts, such as Darrell Waltrip, Lake Speed, Ricky Rudd, Tony Stewart, and Jeff Gordon.