Overhead camshaft (OHC) valvetrain configurations place the camshaft within the cylinder heads, above the combustion chambers, and drive the valves or lifters directly instead of using pushrods. This arrangement is more complex, and relies on a timing belt or chain, but allows for greater valvetrain flexibility.

There are two overhead camshaft layouts:

Single overhead camshaft is a design in which a one camshaft is placed within the cylinder head. In straight engines this means there is one camshaft in the one head, while in a V engine there are two camshafts: one per cylinder bank.

The SOHC design is inherently mechanically more efficient than a comparable cam-in-block design, as there are fewer moving parts: there are no pushrods or rocker arms. This also allows for higher engine speeds, which in turn will by definition increase power output for a given torque. Instead the cams operate the valves directly or by a short rocker as opposed to overhead valve cam-in-block engines, which have long pushrods to transfer the movement of the lobes on the camshaft in the engine block to the valves in the cylinder head.

SOHC designs also allow for multivalve heads, in which each cylinder has more than two valves.

Single overhead cam (also SOHC) refers to the internal combustion engine design where one camshaft is located above the valves. SOHC engines are generally (but not always) limited to two valves per cylinder, one for intake and one for exhaust.

While modern domestic manufacturers have only recently begun a large-scale implementation of overhead cam technology, it has been used in some domestic production vehicles intermittently at least since the 1960's, when Kaiser-Jeep produced the 230 Cubic inch "Tornado" SOHC inline six engine. In the 1970's, both General Motors and Ford produced SOHC inline four engines: the GM 2300 engine and the Ford OHC engine "Pinto" engine, respectively. In the 1980's and 1990's the trend accelerated. 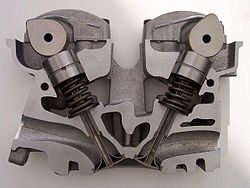 A cylinder head sliced in half shows two overhead camshafts—one above each of the two valves.

Double overhead camshafts are not required in order to have multiple inlet or exhaust valves, but are necessary for more than 2 valves that are directly actuated (though still usually via tappets). Not all DOHC engines are multivalve engines — DOHC was common in two valve per cylinder heads for decades before multivalve heads appeared, however today DOHC is synonymous with multivalve heads, since almost all DOHC engines have between three and five valves per cylinder.

When DOHC technology was introduced in mainstream vehicles, it was common for the technology to be heavily advertised. While the technology was used at first in limited production and sports cars, the Fiat group is historically credited as the first car company to use a belt driven DOHC engine across their complete product line, comprised of coupes, sedans, convertables and station wagons, in the mid-1960's.