The Fiat Regata was the saloon version of the small family car Fiat Ritmo. It was produced from 1983 to 1990, corresponding to the post-facelift Ritmo. The Regata had a choice of two gasoline and two diesel engines. Competitors in the same class as the Regata were the Audi 80, Ford Orion, Rover 213/216, Vauxhall Belmont and the Volkswagen Jetta. A Spanish-built version was sold by SEAT as the SEAT Málaga.

The Regata, released at the Frankfurt Motor Show in September 1983, was developed from the pre-facelift Ritmo (which had been known in U.K. and U.S. markets as the Fiat Strada) and utilised almost all the mechanicals, although the wheelbase was stretched slightly. A conventional four-door three-box design, it bore very little external resemblance to the original Ritmo although it hinted strongly at the look of the 1982 face-lift for that car.

The Regata Weekend estate was introduced in 1984. It was available with the 1.3 L or 1.6 L engines and both diesel engines. Replacing the 131 Panorama, it featured a folding rear bumper, thus enabling easier access to the load area. The suspension and brakes were uprated to cope with the extra weight.

A mid-life update was carried out in 1986, in which numerous small details were changed (such as the door handles). The 1585 cc engine gained fuel injection to become the 100ie (also available with a catalytic converter, losing some power and becoming the 90ie) whilst a catalysed and fuel-injected 1498 cc unit powered the 75ie. The 85 Automatic was also replaced by the 70 Automatic with a 1.3 L engine rated at 65 bhp.

The diesel-powered models also changed slightly. An 80 bhp 1929 cc turbodiesel engine was introduced whilst the 1714 cc unit dropped in capacity to 1697 cc (but gained power to 60 bhp and had reduced fuel consumption). The weight was also reduced slightly.

Production ceased in 1990, when the Tempra was introduced. 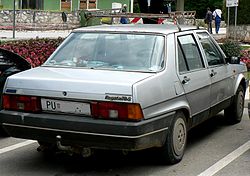