The Ferrari F12berlinetta (also unofficially referred to as the F12 Berlinetta or the F12, and unofficially stylized as the F12Berlinetta or F12B for short) is a front mid-engine, rear-wheel-drive grand tourer produced by Italian sports car manufacturer Ferrari. The F12berlinetta, debuted at the 2012 Geneva Motor Show, replaces the 599 series grand tourers. The naturally aspirated 6.3 litre Ferrari V12 engine in the F12berlinetta has won the International Engine of the Year Awards 2013 in the Best Performance category and Best Engine above 4.0 litres. The F12berlinetta was named "The Supercar of the Year 2012" by car magazine Top Gear.

In 2014 it was awarded the XXIII Premio Compasso d'oro ADI. Accepting the award was Ferrari’s Senior Vice President of Design, Flavio Manzoni.

The engine of the F12berlinetta has been designed to be more efficient than that of the 599, as well as more powerful. The engine management system is fitted with Ferrari's HELE start-stop system to reduce fuel consumption when idling. Ferrari reports that the F12berlinetta can achieve Template:Convert/mpgimpTemplate:Convert/test/Aon – a 30% improvement over the 599 – and produces CO2 emissions of 350 g/km.

Similar to the California, 458 Italia, FF and LaFerrari, the F12berlinetta transmits power through a 7-speed dual-clutch automated semi-automatic gearbox operated by the driver using paddle shifters behind the steering wheel. Compared to similar models, the F12berlinetta uses shortened gear ratios to match the power of the engine.

Rear view of the F12berlinetta at the 2012 Geneva Motor Show.

The body of the F12berlinetta is designed by the Ferrari Styling Center and Pininfarina, and shares some styling elements with other recent Ferrari models. This includes a front grille similar to the FF and headlights shared with the FF and 458 Italia. The interior, based on the FF, features new "Frau leather" upholstery with aluminum, Alutex, and carbon fibre trim, and has increased luggage space compared to the 599.

Ferrari F12tdf at the 2016 Goodwood Festival of Speed 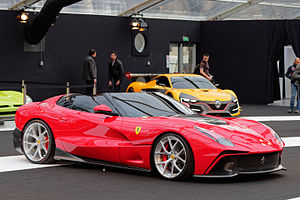 The F12 TRS is a unique one-off with a red barchetta body based on the F12berlinetta, made for a customer by Ferrari under its Special Projects program. It made its public debut in Sicily at Ferrari Cavalcade in June 2014. Designed in-house by the Centro Stile Ferrari headed by Flavio Manzoni, it was inspired by the 1957 250 Testa Rossa, reinterpreted in a modern key.

The Ferrari F12 TRS also took part to the 2014 Goodwood Festival of Speed.

In November 2014 a second F12 TRS was spotted at Circuito Monteblanco in Spain, painted in black, while the red version was displayed again in January 2015 at the Festival Automobile International in Paris.

A third F12 TRS was seen in Rome at the Ferrari Cavalcade in June 2015, finished in a chrome grey paint and featuring redesigned front bumper, headlights, mirrors and rear diffuser.

A red F12 TRS featuring the same redesigned body was spotted in Corsica in 2016.

The Ferrari SP America is a F12berlinetta-based one-off coupé completed in 2014, like the F12 TRS an offspring of Ferrari's Special Projects program.

The Ferrari F60 America is a limited production roadster derivative of the F12, celebrating 60 years of Ferrari in North America. It was built by Ferrari in ten examples, according to the manufacturer all already spoken for at the time of the car's public introduction in October 2014. The open-top configuration pays homage to US-only limited production convertible Ferraris of the past, such as the 275 GTS/4 NART Spider. Compared to the F12, the F60 has all-new bodywork; it uses a light removable soft top instead of a conventional convertible top. Each of the ten examples built features an asymmetrical cabin design with red trim for the driver's area and black for the passenger, American flag detailing in the center of the backrests of both seats, and classic blue and white North American Racing Team livery.

At the March 2015 Geneva Motor Show Carrozzeria Touring unveiled the Touring Berlinetta Lusso, a one-off two-seater, three-box coupé based on the F12berlinetta. Carrozzeria Touring made the car on a client's request, re-boding the F12 in aluminum alloys and carbon fiber; a small production run of five examples was announced.

The Ferrari F12berlinetta SG50 Edition is a one-off car made to celebrate Singapore’s 50 years of independence.

The Ferrari SP275 RW Competizione is a one-off car inspired by the Ferrari 275 GTB/C Speciale 1964.