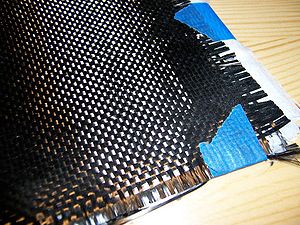 A cloth of woven carbon filaments

Carbon fiber can refer to carbon filament thread, or to felt or woven cloth made from those carbon filaments. By extension, it is also used informally to mean any composite material made with carbon filament; for more on that application, see graphite-reinforced plastic.

Each carbon filament is made out of long, thin filaments of carbon sometimes transferred to graphite. A common method of making carbon filaments is the oxidation and thermal pyrolysis of polyacrylonitrile (PAN), a polymer used in the creation of many synthetic materials. Like all polymers, polyacrylonitrile molecules are long chains, which are aligned in the process of drawing continuous filaments. When heated in the correct conditions, these chains bond side-to-side (letter polymers), forming narrow graphene sheets which eventually merge to form a single, jelly roll-shaped or round filament. The result is usually 93-95% carbon. Lower-quality fibre can be manufactured using pitch or rayon as the precursor instead of PAN. The carbon can become further enhanced, as high modulus, or high strength carbon, by heat treatment processes. Carbon heated in the range of 1500-2000 °C (carbonization) exhibits the highest tensile strength (820,000 psi or 5,650 MPa or 5,650 N/mm²), while carbon fiber heated from 2500 to 3000 °C (graphitizing) exhibits a higher modulus of elasticity (77,000,000 psi or 531 GPa or 531 kN/mm²). For further literature see Rose, Ziegmann and Hillermeier.

Precursors for carbon fibers are PAN, rayon and pitch. In former times rayon was more used as a precursor and still is for certain specialized applications (rockets). Carbon fiber filament yarns are used in several proccessing techniques: the direct uses are for prepregging, filament winding, pultrusion, weaving, braiding etc.

Carbon fiber is most notably used to reinforce composite materials, particularly the class of materials known as carbon fiber reinforced plastics. This class of materials is used in aircraft parts, high-performance vehicles, sporting equipment, wind generator blades and gears and other demanding mechanical applications; a more thorough discussion of these uses, including composite lay-up techniques, can be found in the carbon fiber reinforced plastic article.

Non-polymer materials can also be used as the matrix for carbon fibres. Due to the formation of metal carbides (i.e., water-soluble AlC), bad wetting by some metals, and corrosion considerations, carbon has seen limited success in metal matrix composite applications; however, this can be improved by proper surface treatment, eg. for carbon-aluminium MMCs a vapor deposition of titanium boride on the fibers is often employed. Reinforced carbon-carbon (RCC) consists of carbon fiber-reinforced graphite, and is used structurally in high-temperature applications, such as the nose cone and leading edges of the space shuttle.

The fiber also finds use in filtration of high-temperature gases, as an electrode with high surface area and impeccable corrosion resistance, and as an anti-static component in high-performance clothing.

It is also widely used to enhance the look of automobiles and reduce weight. Many of the "tuner" style cars have carbon fiber hoods to reduce weight from a stock 28 lb hood to an 8 lb hood. Another use is in the increasingly popular hobby of RC cars, many high-end kits come with many carbon fiber parts due to their light weight and attractive appearance.

Carbon fiber is also used by skateboard companies to make strong lightweight skateboards for all types of skating, mainly downhill speedboarding. It is also used in many composite longboards to stiffen an otherwise very flexible board.

Carbon fiber is also used on racing yachts, rowing boats, kayaks and canoes, as well as on the paddles and oars used with them. Its use has allowed boat builders to produce stiffer and lighter boats. Carbon, along with other artificial fibers, has replaced more traditional laminated wooden or fiberglass constructions.