The Ferrari 488 (Tipo F142M) is a mid-engined sports car produced by the Italian sports car manufacturer Ferrari, introduced in 2015 to replace the previous 458.

It is powered by a 3.9-litre twin-turbocharged V8, smaller in displacement and higher in output than the 458's naturally aspirated engine. The 488 GTB was named "The Supercar of the Year 2015" by car magazine Top Gear.

The only available transmission for the 488 is an automated manual dual-clutch 7-speed F1 gearbox manufactured for Ferrari by Getrag, based on the gearbox used in the 458.

Improved carbon-ceramic brakes are supplied on the 488, derived from technology used in LaFerrari, constructed with new materials that reduce the time needed to achieve optimum operating temperature. Disc sizes are 398 mm at the front, and 360 mm at the rear. These advancements reportedly reduce stopping distances by 9% over the 458.

A new 5-spoke alloy wheel was designed for the 488, measuring Template:Convert/LoffAoffDflipSoffTemplate:Convert/test/A front and rear. Front tires measure 245/35 with rears 305/30.

The first 488 to be introduced was the 488 GTB 2-seat berlinetta, successor to the 458 Italia. It was launched on 3 February 2015, in advance of its world première at the March 2015 Geneva Motor Show.

The Ferrari 488 Spider is a 2-seat roadster variant of the 488 with a folding hardtop, like the 458 Spider it replaces. Ferrari released pictures of the 488 Spider at the end of July 2015, and the car debuted at the Frankfurt Motor Show in September 2015. 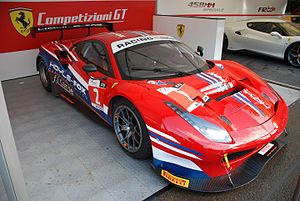 The racing versions of the 488 GTB are the successors to the 458 Italia GTC and GT3. They have a more aggressive bodywork compared to the GTE and GT3 specs of the 458 Italia thanks to the new 2016 FIA GTE and GT3 regulations, while their engine is the same 3.9 litre V8 turbo used for the 488 GTB. In 2016 the 488 GTE was entered by AF Corse in the FIA World Endurance Championship, competing also in the prestigious 24 Hours of Le Mans, while Risi Competizione lined it up in the IMSA WeatherTech SportsCar Championship. Both the 488 GTE and GT3 were unveiled at the 2015 Finali Mondiali Ferrari which took place at Mugello.

The 488 GTE made its competition debut in Round 1 of the 2016 WeatherTech SportsCar Championship at the 24 Hours of Daytona on 30–31 January. The 488 GTE run by Scuderia Corsa finished 10th outright and 4th in the GTLM class. At the 2016 24 Hours of Le Mans, the car took second place, ran by Risi Competizione.

The 488 GTE in 2017 took to the track with the first race of the IMSA WeatherTech SportsCar Championship in the 2017 24 Hours of Daytona, where the car finished 3rd place the GTLM class, run by Risi Competizione.

The 488 GT3 made its world competition debut in Round 2 of the 2016 Australian GT Championship at the Albert Park Circuit in Melbourne on 17 March (the round was run as a support category to the 2016 Australian Grand Prix). Italian Andrea Montermini and Danish driver Benny Simonsen shared the car for Australian team DeFelice Homes. Over the 4 races that made up the round, Montermini finished 5th in race 1 and 14th in race 3 while Simonsen finished 2nd in race 2 and 6th in the fourth and final race.

In February 2017, the 488 GT3 won the 2017 Liqui Moly Bathurst 12 Hour, ran by Maranello Motorsport. The car took the race from the pole position and for the most part stayed up in the front for most of the race, and did not fall out of the top 5 throughout the race. This was the second victory for Ferrari at the event, both won in 2014 and 2017 by Maranello Motorsport.

The Ferrari J50 is a 2-seat roadster variant of the 488 Spider. It was designed by Flavio Manzoni and was built to celebrate half a century of Ferrari's presence in Japan.

The body of the 488 has been designed to increase downforce by 50% over the 458 while reducing aerodynamic drag. A new front double splitter serves two functions: increasing radiator cooling by forcing air into them and also channeling the air over the underbody vortex generators to create ground effect without adding unwanted drag. A newly designed blown rear spoiler (actually a slotted flap) integrated into the rear decklid and bumper increases downforce without requiring a raised wing. The central "Aero Pillar" deflects air under the flat body of the car while two vents in the bonnet provide an exit for air from the dual intakes of the front bumper, further reducing air pressure over the front of the car.

Underbody vortex generators work to reduce air pressure beneath the car thereby increasing overall downforce. A larger rear diffuser works to increase the velocity of air exiting the underbody to further lower air pressure, in conjunction with active aerodynamic variable flaps that both reduce drag and increase downforce as controlled by a microprocessor. The increased size of the diffuser over the previous 458 requires the twin exhausts of the 488 to be positioned higher in the rear bumper for clearance.

The scalloped side air intakes are a homage to those found on the 308 GTB and are divided by a central partition. Air entering the top intake is partially directed into the turbocharger compressor intake, while the rest is directed through the rear of the car and exits alongside the rear lights, increasing air pressure behind the car in order to reduce aerodynamic drag. Airflow entering the lower intake is directed towards the intercoolers in order to cool the intake charge. Even the door handles - dubbed 'shark fins' - are shaped in a way which improves airflow by cleaning and funneling air into the large intakes above the rear wheels