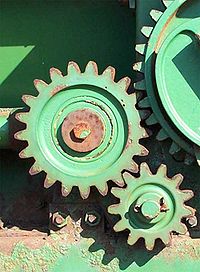 The gear ratio is the relationship between the number of teeth on two gears that are meshed or two sprockets connected with a common roller chain, or the circumferences of two pulleys connected with a drive belt.

In the picture to the right, the smaller gear has thirteen teeth, while the second, larger gear has twenty-one teeth. The gear ratio is therefore 13/21 or 1/1.61 (also written as 1:1.61)

Suppose the largest gear in the picture has 42 teeth, the gear ratio between the second and third gear then is; 21/42 = 1/2 and for every revolution of the smallest gear the largest gear has only turned 0.62/2 = 0.31 revolution, a total reduction of around 1:3.

Since the diameter is equal to twice the radius;

But keep in mind that counting the teeth derives the exact gear ratio, regardless of any variations in the diameter measurement. In the picture, each time the 13 teeth of the smaller gear make a revolution, 13 teeth of the larger gear will have moved, i.e. made 13/21 of a revolution or 0.62 of a revolution. As long as the gears remain meshed, the accounting of teeth and revolutions will remain perfect. So for instance gears can be used to construct a clock in which the minute hand moves exactly sixty times faster than the hour hand, regardless of the overall accuracy of the watch.

Diameter measurements are useful for determining approximate gear ratios for non-gear linkages such as pulleys and belts. Smooth belts can slip, so even if exact pulley diameters are known quite exactly, the gear ratio may vary in operation, and may even depend on the load.

Belts can have teeth in them also and be coupled to gear-like pulleys. Special gears called sprockets can be coupled together with chains, as on bicycles and some motorcycles. Again, exact accounting of teeth and revolutions can be applied with these machines.

A belt with teeth, called the timing belt, is used in some internal combustion engines to exactly synchronize the movement of the camshaft, so that the valves open and close at the top of each cylinder at exactly the right time to the movement of each cylinder. From the time the car is driven off the lot, to the time the belt needs replacing thousands of kilometers later, it synchronizes the two shafts exactly. A chain, called a timing chain, is used on other automobiles for this purpose. In a few automobiles, the camshaft and crankshaft are coupled directly together through meshed gears.

Automobiles drivetrains generally have two or more areas where gearing is used: one in the transmission, which contains a number of different sets of gearing that can be changed to allow a wide range of vehicle speeds, and another at the differential, which contains one additional set of gearing that provides further mechanical advantage at the wheels. These components might be separate and connected by a shaft, or they might be combined into one unit called a transaxle

A Chevrolet Corvette Z06 with a six-speed manual transmission has the following gear ratios in the transmission:

The car’s tires can almost be thought of as a third type of gearing. The example Corvette Z06 is equipped with 295/35-18 tires, which have a circumference of 82.1 inches. This means that for every complete revolution of the wheel, the car travels 82.1 inches. If the Corvette had larger tires, it would travel farther with each revolution of the wheel, which would be like a higher gear. If the car had smaller tires, it would be like a lower gear.

With the gear ratios of the transmission and differential, and the size of the tires, it becomes possible to calculate the speed of the car for a particular gear at a particular engine speed.

For example, it is possible to determine the distance the car will travel for one revolution of the engine by dividing the circumference of the tire by the combined gear ratio of the transmission and differential.