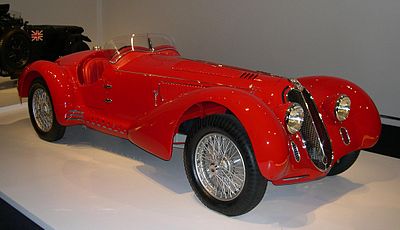 Alfa Romeo's 8C was a famed sports car of the 1930s. The name referred to the straight 8 cylinder engine. The Vittorio Jano-designed 8C was Alfa's primary sports model from its introduction in 1931 to its retirement in 1939.

The first models were the 2300, a reference to the car's 2.3 L (2300 cc) engine. The short wheelbase version of this car won the Targa Florio race in Sicily, but it was the Italian Grand Prix victory at Monza that gave it its nickname, "Monza".

The supercharged dual overhead cam straight-8 engine, also designed by Jano, was later enlarged to 2.6 L. In this guise, the 8C could accelerate to 60 mph (97 km/h) in less than 7 seconds and could eventually reach 135 mph (217 km/h). 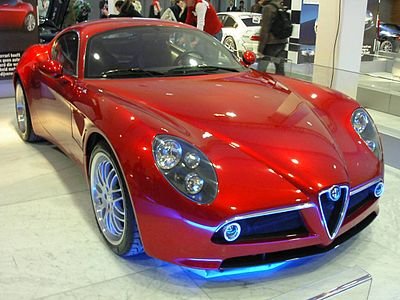 Alfa Romeo launched the stunning '8C Competizione' concept car at the 60th Frankfurt Motor Show in 2004 to an astonished audience.

The beautiful sweeping lines of the twin seater hark back to the early styling of the Alfa's of the 30's and 40's, and the 'Competizione' name is a pointer to the '6C 2500 Competizione' the Mille Miglia race competitor in 1950, driven by Juan-Manuel Fangio and Augusto Zanardi.

According to italian media, Sergio Marchionne, CEO of the Fiat Group, has confirmed that the car will indeed be produced.

At the 2005 Pebble Beach Concours d'Elegance, Alfa Romeo released the Alfa 8C Spider, a roadster version of the coupe, with different alloy wheels.