The Ferrari Dino engine is a line of mechanically similar V6, V8, and V12 engines produced by Ferrari for the past 40 years

Alfredo "Dino" Ferrari, was the son of Enzo Ferrari. Dino suggested to Enzo Ferrari the development of a V6 engine for F2 at the end of 1955. Soon afterwards, Alfredo fell ill, suffering from muscular dystrophy. While in hospital, he discussed technical details with the engineer Vittorio Jano. Dino would never see the engine; he died on June 30, 1956 at the age of 24.

The production Dino V6 began as a discussion between Vittorio Jano and Enzo and Dino Ferrari about the ideal 1.5 L engine for use in the 1958 Formula 2 auto racing series. Jano, formerly of Alfa Romeo and Lancia, pressed for a conventional 60° V6 but the Ferraris were open-minded.

This engine was so small that very little room was available for smooth intake tracts. The Ferraris were convinced that a freer-flowing intake could result in more power, so a new design was called for.

Ferrari designers began work on the first Dino V6 engine in 1956 and the engine was running by the end of the year. The engine displaced 1489 cc. This engine was installed in the Ferrari 156 F2 car and was first raced in the Grand Prix of Naples in April 1957, where it finished in third place behind two Lancia-Ferrari V8 Formula One cars.

The result of the trios creativity was the world's only 65° V6 engine. The extra 5° between cylinder banks gave Ferrari the straight intakes he wanted, but resulted in an odd 185°/55° crankshaft for even firing. Although the Dino V6 was discontinued with the introduction of the V8, the 65° design continues to this day: It reappeared on Ferrari's 1992 456 V12.

The 65° Dino V6 quickly replaced the 60° unit in racing, and made its way to the street as well. Ferrari needed to have the engine in 500 production vehicles to homologate it for racing use. The company worked with Fiat to develop a sports car to house it, and the front-engined Fiat Dino project was born.

The same V6 engine was handed off to Lancia for use in its WRC-champ Stratos in the early 1970s, but Ferrari's Dino had moved on to 8 cylinders. 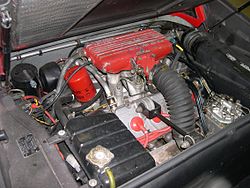 A very unusual Dino Quattrovalvole was used in the Lancia Thema 8.32. It was based on the 308 QV's engine, but used a split-plane crankshaft rather than the Ferrari-type flat-plane. The engine was constructed by Ducati rather than Ferrari, and was produced from 1986 through 1991.

The Quattrovalvole was also used by Lancia for their attempt at the World Sportscar Championship with the LC2. The engine was twin-turbocharged and destroked to 2.65 litres, but produced 720 hp in qualifying trim. The engine was later increased to 3.0 litres and increased power output to 828 hp.

The turbo also served as a development platform for the forthcoming 1984 288 GTO supercar. That famous Ferrari was meant for Group B racing, with a 2855 cc version of the 308's engine (bore was down by 1 mm to meet the regulations of the class). With two IHI turbos, a Behr intercooler, and Weber-Marelli fuel injection, the GTO boasted 400 hp (298 kW) from Dino's engine.

The supercar V12 was reborn again for the 2003 Enzo. Bore was the same as the F430 V8 at 92 mm, and stroke was up to 75.2 mm for 5998 cc total displacement. Variable valve timing was added on both intake and exhaust. Normally-aspirated once again, the Enzo produced 660 CV (485 kW), the highest output ever for a non-forced induction engine.

The Dino-based V12 is set to be replaced by an all-new V12 engine based on the shared Ferrari/Maserati V8 in the later part of this decade.