The demise that same year of the F512M left the company with only the exotic F50 and V8 F355 as mid-engined models. Although the 550 was a softer GT model, it did take the place of the F512M as the company's upmarket coupe, discounting the F50 supercar.

The 550 featured a luxurious and roomy interior. The (rear) trunk was tall and wide, though not very deep, and could accept a full set of golf clubs or standard overnight bags. 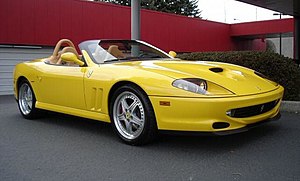 Ferrari introduced a convertible version of the 550 at the Paris Motor Show in 2000. This Barchetta was a true roadster with no real convertible top provided.