The Ferrari 250 is a series of sports cars from the 1950s and early 1960s. It was the company's most successful early line of vehicles, produced for over a decade from 1953 to 1964 and spawning countless variants. The 250 was replaced by the 275. The most celebrated 250 is the 1962 250 GTO, a true supercar that spawned countless imitators.

Nearly all 250s share the same engine: The Colombo Type 125 V12. At 2963 cc, it is not a large engine even for the time, but its light weight and impressive output (up to 280 hp) made a big difference. The Ferrari V12 weighed hundreds of pounds less than its chief competitors — for example, it was nearly half the weight of the Jaguar XK straight-6 The light V12 propelled the small Ferrari 250 racing cars to victory after victory.

The 250 series is the most celebrated and valuable of all Ferraris. With its numerous low-production models and racing success, various 250s will make up most of any "most valuable Ferraris" list. The GTO, Testa Rossa, LM, and Monza all command US$2,000,000 or more today.

Typical of Ferrari, the Colombo V12 made its debut on the race track, with the racing 250s preceding the street cars by three years.

A predecessor to the 250 line was the 225 S introduced at the 1952 Giro di Sicilia. Two of the two-seat sports prototypes were built, an open barchetta and closed coupe both by Vignale. Seven 225 S cars were entered at the Mille Miglia, but these were overshadowed by their larger-engined 250 S brother. Although not as heralded as the 250 line, the 225 did play one unique historical role: A 225 S tested at Imola was the first Ferrari to drive on that course.

The first of the 250 line was the experimental 250 S berlinetta prototype entered in the 1952 Mille Miglia. The company's newest product was entrusted to Giovanni Bracco and Alfonso Rolfo and was severely tested by the Mercedes-Benz 300SL racers run by Rudolf Caracciola, Hermann Lang, and Karl Kling. The little 230 hp (171 kW) Ferrari was outgunned in the long straights but fought back in the hills and curves and Bracco emerged victorious at the end. This same car was later entered at the 24 Hours of Le Mans and the Carrera Panamericana.

The little 250 S used a 2250 mm wheelbase with a "Tuboscocca" tubular trellis frame. Underneath were double wishbones at the front and a live axle located with double longitudinal semi-elliptic springs at the rear. Drum brakes and worm and sector steering were the norm. The dry-sump 3.0 L (2953 cc/180 in³) engine used three Weber 36DCF carburettors and was mated directly to a five-speed manual transmission.

Lauding the success of the 250 S at the Mille Miglia, Ferrari showed a more-conventional chassis for the new 250 engine at the 1952 Paris Motor Show. Pinin Farina clothed this chassis, with the celebratory 250 MM coupe launched at the 1953 Geneva Motor Show. This car was almost plain by contemporary standards, but it posessed a certain purposefulness with its small grille and compact tail complete with a panoramic rear window. Carrozzeria Vignale's open barchetta also broke new styling ground, with recessed headlights and side vents becoming a staple of Ferrari design for the 1950s.

Like the 250 S, the 250 MM was a racing car, debuting at the Giro di Sicilia with privateer Paulo Marzotto. A Carrozzeria Morelli-bodied 250 MM barchetta won the 1954 Mille Miglia with driver Clemente Biondetti, living up to its name. The V12-powered 250 MM was replaced by the four-cylinder 625 TF and 735 S later in 1953.

An unusual hybrid between the light four-cylinder 750 Monza and the 250 line was the 250 Monza of 1954. It used the short wheelbase chassis from the 750 Monza and the first two shared the Pinin Farina barchetta shape of the 750 Monza and a one-off 500 Mondial. Two more 250 Monzas were built by Carrozzeria Scaglietti, an early use of the now-familiar coachbuilder. Although a frequent entrant through 1956, the 250 Monzas failed to gain much success and the union of the Monza chassis and 250 engine was not pursued beyond this model.

The racing 250 Testa Rossa was one of the most successful Ferrari racing cars in its history.

Perhaps the most famous 250 of all was the 250 GTO, often called the first supercar. A radically-restyled GTO, properly the 250 GTO/64, was launched in 1964, but just four were built.

The 250 engine from the Testa Rossa was mounted in the midships position for the 250 P prototype racer of 1963.

The mid-engined 250 Le Mans looked every bit the prototype racer but was intended to eventually be produced as a road-going GT. Descended from the 250 P, the Le Mans also appeared in 1963 and sported Pininfarina bodywork.

The 1953 250 Export and Europa were the only of the family to use a different engine. They shared the 2963 cc Lampredi V12 designed for Formula 1 use.

Initially, Ferrari constructed only racing cars, but by 1950 they began to produce exclusive road-going coupés and convertibles, in part to fund the racing effort. The cars were mostly bodied by Vignale, Ghia of Turin and Touring of Milan. Ferrari believed that the success of the Scuderia on the race circuits of the world would attract a client base for luxury, high-performance cars. The early Ferrari road cars were produced in very small numbers, but by 1955 a publicity brochure described a new model as “the first series-produced vehicle benefiting from the experiences of the race track”. The new model that this brochure described was the second series of Ferrari 250 GTs, which became known as the 250 GT Boano Coupé and 250 GT Ellena Coupé. The first series was the Ferrari 250 Europa GT and was significant in that for the first time Carrozzeria Pinin Farina was Ferrari’s preferred coachbuilder, producing 48 of the 53 250 Europa GTs built. Unveiled at the 1956 Geneva Salon, the new model, designed again by Pinin Farina, had more graceful proportions, with a slimmer front grille and clean, straight lines stretching the length of the car from the wings to the upright tail lights. Pinin Farina only produced the first few cars; at this time they didn’t have the capacity to put this car into production. Instead, manufacture of the car was given to a new company owned by former Stabilimenti Farina and Ghia employee Mario Felice Boano and his partner Luciano Pollo. The Pinin Farina design was nearly unchanged but it would be the Boano name that would become synonymous with this car.

Boano built 66 of the Pinin Farina-designed coupés, which was considered a large number in Ferrari’s early days. When Mario Felice Boano was asked to head the design department of FIAT, the Ferrari production was handed over to his son-in-law Ezio Ellena and the company became Carrozzeria Ellena, the third to produce the same design. Although the design was the same, all three coachbuilders had subtle differences. The five Pinin Farina-built cars had a slightly higher wing line. The Boanos had a lower roofline, which prompted the commonly used terms “high roof” for the Ellenas and “low roof” for the Boano-built cars. The Pinin Farina and Boano cars had quarter-lights in the side windows while the Ellenas did not. (The first few cars built by Ellena were identical in appearance to the “low-roof” Boanos, but these differences are evident on the remaining cars.) Ellena had produced 50 cars when Ferrari ended the production run. A new 250 GT model had been designed by Pinin Farina and they would produce it themselves; the names of Boano and Ellena would fade into Ferrari history. Source

The 250 Europa, also introduced in Paris in 1953, looked entirely different. With the long 2800 mm wheelbase and Ferrari America-style bodies, it was designed as more of a GT car than any previous 250. Both Pininfarina and Vignale handled the coachwork, with 18 produced in total.

Following on the success of the 250 Europa, a 250 GT Europa version was released at Paris in 1954. This time, power came from the Colombo engine and the design and coachwork was handled by Pininfarina on the 2600 mm long wheelbase. 44 examples were built between 1954 and January 1956.

The 250 GT Boano has been delivered in Italy in 1956. It is the first Ferrari ever made at the works of Mario Boano and therefore a very special Boano. It is a marvellous early piece of the Ferrari history which has the same frame Tipo 508, engine Tipo 128 B and suspension like the Tour de France which has been produced in the same time.

The LWB 250 GT theme was expanded with 1960's 2+2 model. The first four-seat Ferrari, the 250 GT 2+2 (also called the 250 GTE) was designed and built by Pininfarina to the tune of 950 examples. It used the long 2600 mm wheelbase, but interior space was still insufficient for four occupants so the engine and firewall were moved forward. Engine output was back up to 240 hp (178 kW).

956 GTEs were constructed with prototypes starting in 1959 and continuing through three series until 1963.

In 2004, Sports Car International named the Lusso number ten on the list of Top Sports Cars of the 1960s.

The 250 design was extremely successful on the race course as well as the street. A number of GT competition models were built in varying states of racing trim.

Named for the 10-day automobile race, not the famous bicycle race of the same name, a number of 250 GT "Tour de France" Berlinettas were sold for GT races from 1956 through 1959. Construction was handled by Carrozzeria Scaglietti based on a Pinin Farina design. The engine began at 240 hp (178 kW) but rose to 260 hp (193 kW) by the end. 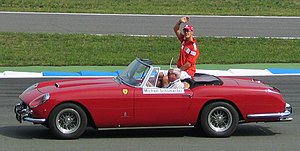 Released at Geneva in 1957, the original Pininfarina cabriolet used the 2600 mm wheelbase and had distinct bodywork from the Berlinetta. About 36 examples were produced before a second series was shown at Paris in 1959. These later cars had much more in common with the production Berlinetta. About 200 of the series two cars were built.

Motor Trend Classic named the 250 GT Series I Cabriolet and Coupe as number nine in their list of the ten "Greatest Ferraris of all time".

Designed for export to America, the 1957 250 GT California Spyder was Scaglietti's interpretation of an open-top 250 GT. Aluminum was used in the hood, doors, and trunk lid, with steel specified elsewhere. All used the long 2600 mm chassis. About 45 were made before it was replaced by the SWB version in 1960.

Replacing their LWB California Spyder with a SWB version, Scaglietti showed a new Spyder California at Geneva in 1960. Based on the 250 GT SWB, it also introduced disc brakes. About 55 were built. Motor Trend Classic named the 250 Spyder California as number eight in their list of the ten "Greatest Ferraris of all time".

Development of the 250 GT SWB Berlinetta was handled by Giotto Bizzarrini, Carlo Chiti, and young Mauro Forghieri, the same team that later produced the 250 GTO. Disc brakes were a first in a Ferrari GT, and the combination of low weight, high power, and well-sorted suspension made it a competitive offering. It was unveiled at the Paris Motor Show in October and quickly began selling and racing. The SWB Berlinetta claimed GT class of the Constructor's Championship for Ferrari in 1961.

In 2004, Sports Car International named the 250 GT SWB number seven on the list of Top Sports Cars of the 1960s. Motor Trend Classic named the 250 SWB as number five in their list of the ten "Greatest Ferraris of all time".

A few 250 models were also built for racing alone. Most famous was the 250 GTO and Testa Rossa.

The racing 250 Testa Rossa line is documented at Ferrari TR.

A 250 in all but name, the 1963 330 America shared the outgoing model's chassis if not its engine. Powered by the new 4.0 L engine of the later 330 cars, 50 330 Americas were built. Likely the most famous 330 America is that belonging to California socialite Sandra Ilene West. Mrs. West was buried at the wheel of her car following a 1977 drug overdose. Her instructions specified that she be clad in her lace nightgown with the driver’s seat "slanted at a comfortable angle". The car (and driver) is interred at the Alamo Masonic Cemetery, San Antonio, Texas.