Felipe Massa (born April 25, 1981) is a Brazilian Formula One racing driver formerly in the employ of the Sauber team and for 2006 Michael Schumacher's partner at Scuderia Ferrari Marlboro.

Born in São Paulo, Brazil, Massa began karting when he was 9 years old, finishing fourth in his first season. He continued in national and international championships for 7 years, and in 1998 he moved into Formula Chevrolet, finishing the Brazilian championship in fifth. In the next season, he won 3 of the 10 races and took the championship. In 2000, he moved to Europe to compete in the Italian Formula Renault series, winning both it and the European Formula Renault championship in the same year. Whilst having the opportunity to move into Formula 3, he opted instead for the Formula 3000 Euro-Series, and was dominant, winning 6 of the 8 races to take the championship. He was offered an F1 test with the Sauber team, who promptly signed him for 2002. In the meantime he guested for Alfa Romeo in the European Touring Car series. 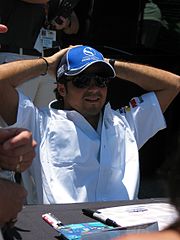 His debut season of F1 saw him paired with ex-F3000 champion Nick Heidfeld. Whilst showing that he definitely had pace, Massa made several mistakes and spun off the track on many occasions. He managed to score 4 championship points, including a 5th place finish at the Spanish Grand Prix at the Circuit de Catalunya. Late in the season he received a penalty for the United States Grand Prix, and thus Sauber brought in Heinz-Harald Frentzen, their former driver. Massa returned for Suzuka, but Frentzen was already confirmed as Heidfeld's team-mate for 2003. Having been denied a Jordan race seat, Massa moved to Ferrari as a test driver. Having impressed the team, and showing signs that his mistake rate had declined, Massa was re-signed by the Sauber team for 2004, alongside Giancarlo Fisichella. He had a good season, scoring 12 of the team's 34 points - highlighted by a career-best 4th place at the Belgian Grand Prix. Fisichella generally outperformed his Brazilian team-mate, but Massa on occasion demonstrated sound pace. In 2005 he remained with Sauber, but in an uneventful season was unable to score regular points. He managed to outpace second driver Jacques Villeneuve over the course of the year, although the 1997 world champion was often the quicker of the two by the end of 2005. For 2006 he receives promotion to Ferrari. If he performs well against Schumacher he can expect a long and fruitful career. If not, he may find himself moving backwards down the grid once more.