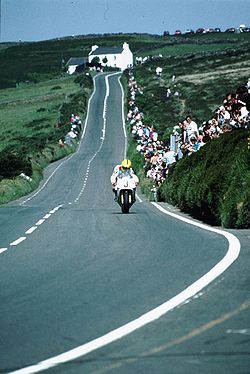 The late Joey Dunlop riding down from Kate's Cottage towards Creg ny Baa.

The Isle of Man TT (Tourist Trophy) is a motorcycle racing event held on the Isle of Man since 1907. The race is run on public roads with minimal protection for spectators and riders. 222 people have died since the races began.

Motor racing began on the Isle of Man in 1904 with the Gordon Bennett car trials.

The TT series of motor races were first held on the island's roads in 1904. They were originally restricted to automobiles, but motorcycles were admitted in 1907 and the torturous, undulating terrain made the TT race series the most significant motor-cycle road-racing competition in the world.

Philip McCallen on his Honda RC30.

The first TT race over the Snaefell course took place in 1911. 1923 was the year of the introduction of the Manx Amateur Motorcycle Road Races - a race originally reserved to the amateurs and raced on the same Snaefell course (in 1930 it changed its name in Manx Grand Prix and with this denomination it's still raced in our days in the August-September period). In 1957 the TT races were headlined when the late Bob McIntyre recorded the first 100 mph (161 km/h) lap, riding his Italian Gilera. Two years later, a new racing team, Honda of Japan, participated in the 125 cc race. Today, the premier TT racing bikes are streamlined, technological wonders that complete the Snaefell course at an average speed exceeding 120 mph (193 km/h). Record holders include the late David Jefferies who set a then lap record of 127.29 mph (204.81 km/h) in 2002. This was surpassed by John McGuinness during the 2004 TT on a Yamaha R1 setting a time of 17 min 43.8 s equalling an average lap speed of 127.68 mph (205.43 km/h). McGuinness lowered this even further at the 2006 TT, setting a time of 17:29.26 for an average speed of 129.451 mph (208.33 km/h).

From 1949 to 1976 the race was part of the Motorcycling World Championship and was the home of the British Grand Prix until 1976. The most successful rider was the late Joey Dunlop who won 26 times in various classes from 1977 to 2000.

The Oxford Companion to World Sports and Games notes, "The oldest motor-cycle racing circuit still in use is the Snaefell mountain course over which the Isle of Man Tourist Trophy races are run. Starting at the town of Douglas on the south-east coast, the course takes a wide sweep to the west and north to enter the town of Ramsey on the north-east coast and thence return to the starting point, each lap measuring 37 3/4 miles (60.7 km) and taking in over 200 bends while climbing from sea level to an altitude of over 1,300 ft (396 m). This circuit is the epitome of the natural road course, all the roads used being ordinary public highways closed for the racing and practice sessions".

File:TTmap-big.gif
Map of the course.

Traditionally held in the last week of May and the first week of June, the TT races create a carnival atmosphere. Picnicking crowds flanking the circuit are reminiscent of the community festivals that are part of another form of cycle racing in a different country - the Tour de France.

During the TT Festival it is difficult to travel across or around the island because of the road closures. There is a TT access road in Douglas that gives access to the centre of the mountain course during the event.

The future of the TT is always in doubt with regards to the safety, especially "Mad Sunday" when any member of the public can attempt to race on the course. The TT races are extremely dangerous because of the high speeds on very narrow, twisting streets, roads and lanes flanked by stone walls and even buildings. Between 1907 and 2006 there have been 222 deaths (this number includes the riders killed during the Manx Grand Prix).

Currently there is a Hollywood blockbuster being developed on the TT.

Rumours have started to spread of a well-known sports car manufacturer supporting the event in the future.

The late rally driver Tony Pond drove a standard production Rover 827 Vitesse during his second bid to be the first person to lap the Isle of Man TT circuit at over 160 km/h in a four wheeled vehicle. Tony, an Isle of Man resident and one of Britain's most famous rally drivers, almost made it during his attempt in 1988.