The Lamborghini Gallardo is the Italian supercar maker Lamborghini's "entry-level" car, sitting beneath the Murciélago. It is also the first car to feature the new Lamborghini V10 engine - only the third engine designed by the firm. 3,000 Gallardos were built in just two years, making it the company's most-produced model to date. The second-place Diablo took a decade to sell 2,903 examples.

The Gallardo was designed as a competitor to Ferrari's 360 Modena, and now competes with its replacement, the F430. The car is named after a famous breed of fighting bull and is pronounced roughly "gah-yar-do". Gallardo is also Spanish for the word gallant. Although performance is lower than the Murcielago, it is still very high, and the Gallardo has much better rearward visibility and, according to reviewers, is more maneuverable as well as more tractable in low-speed traffic, making the Gallardo a much more practical car to drive. It is also much more practical to use in bad weather than many other supercars, thanks to rear-biased all-wheel drive. Although corporate owner Audi is renowned for its Quattro AWD system, Lamborghini uses a system of its own.

The Gallardo uses a V10 engine based on Audi's old straight-5 design. The engine was split again to become the straight-5 engine found in the new Volkswagen Jetta. The 5.0-liter engine is a current Audi 4.2-liter V8 (featured in Audi's S4, A6, A8, and Q7 models) with two extra cylinders added and a slightly smaller bore diameter.

The Gallardo offers two choices of transmissions, a conventional six-speed manual transmission, and an advanced six-speed electro-hydraulically controlled auto-clutch manual, or, as Lamborghini abbreviates it to, "E-gear". The latter allows the driver to make shifts much faster than an automatic transmission would, with the control that a manual offers. The driver shifts up and down via paddles behind the steering wheel, and does not need to manually actuate the clutch.

Audi, Lamborghini's current owner, plans to offer its own sports car based on the Gallardo architecture, the Audi R8. It would use a V8 in place of the Gallardo's V10 to avoid competing directly with the sister car. 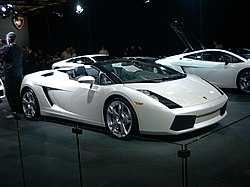 The Lamborghini Gallardo Spyders at the 2006 LA Auto Show.

The production spyder model of the Gallardo was unveiled at the Los Angeles Auto Show in January, 2006. It is considered by the company to be an entirely new model, with 520 hp (388 kW) and a lower-ratio six-speed transmission. The soft top is fully retractable.

Aerosmith drummer Joey Kramer was the first person in North America to take delivery of the spyder model of the Gallardo. 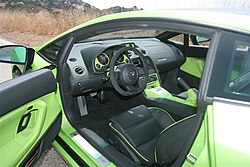 In late 2005, the Gallardo SE (for Special Edition) was introduced. The SE is distinguished from the regular Gallardo externally by having a black roofed two tone color scheme as well as specially designed "Callisto" rims shod with Pirelli tires. Mechanically, the SE addresses many of the criticisms of the original Gallardo; the steering is quicker and more responsive, the gearbox gear ratios have been adjusted to better suit the V10, and the E-gear now has a "thrust mode" to optimize acceleration, and its power has been increased to 520 hp (388 kW). The SE has a higher top speed of 315km/h, (196mph), and it accelerates to 100 km/h in 4.0 seconds. Only 250 units of the Gallardo SE will be produced. All the mechanical upgrades of the SE, however, will be included in all Gallardos after 2006 (excluding the two-tone bodywork).

The Gallardo SE comes with a two-tone interior. All piping and stitching on the ultra-quality leather are executed in the same color as the bodywork of the car. The mid sections of the seats are finished in color-coded upholstery and even the black floormats have a color coded borders. An suede-like alcantara steering wheel, a Lamborghini crest on the headrests and the script on the dashboard insure that once seated on the perforated leather seats, there is no doubt you are inside a special car.

A rear view camera system is also standard issue on the Gallardo SE, as is an amazing multimedia system, however a state of the art navigation system is still on the options list. The sport suspension and an exclusive cover also came with the car but there are still several other options available, like the e-Gear, which featured a 'thrust' mode to offer even more impressive acceleration by improving the gearchange through the different gears.

This "thrust" mode actually automatically revs the car to 5000 rpm, drops the clutch engaging all four wheels in a controlled burnout, and insures the car performs maximum acceleration. This "launch" only requires the driver to engage the "thrust" mode and step on the gas pedal., simlar to the launch technology in Formula 1 racers.

The Gallardo Nera (Special Edition) was introduced at the Paris Motor Show. The Nera has a top speed of 315 km/h (196 mph), and it accelerates to 100km/h in 3.9 seconds, as the engine and drivetrain are identical to the standard Gallardo. The car is meant to showcase the customization options available to the customer in the Ad Personam program. The Nera features special matte black body panels, and is only available in black -- actually a combination of Nero Serapis and Nero Noctis. Brake calipers are painted a special silver, and the taillights are smoked to match the darker paint scheme. The interior is stiched from high-contrast black and white leather in the Q-Citura (lozenge shaped) fashion. Only 185 units of the Gallardo Nera were produced and 60 were destined for the American market. Note that the glass engine cover remained an option, even on the Nera.

A special version of the Gallardo, dubbed the Superleggera, was launched at the 2007 Geneva Auto Show supposedly in preparation for the next Ferrari 430 Scuderia. The Superleggera is lighter than the base Gallardo by around 70 kg (154 lb) - down to approximately 1,360 kg (3,000 lb) - thanks to the use of carbon fibre panels for the rear diffuser, undertray, the rearview-mirror housings, the interior door panels, the central tunnel, and the engine cover. Even the wheel nuts are made of titanium instead of steel to save even more unsprung weight at each corner of the car. According to the original Press Release issued by the factory the superleggera was available in four colors only : Midas Yellow, Borealis Orange, Telesto Gray and Noctis Black, however at least one white Superleggera has been built.

The intake, exhaust and ECU have been upgraded to release an extra 10hp for a total of 530 hp (395 kW). The lightening and extra power result in a 0-100 km/h time of 3.8 seconds, 0.1 seconds faster than the base Gallardo. The 6-speed e-gear transmission, usually a US$ 10,000 option, now comes as a standard. The full price for a Superleggera with everything on it runs for over $200,000. Lamborghini began offering the Gallardo Superleggera in June 2007. In March 2008, Lamborghini announced that they had ceased production of the Gallardo Superleggera. In August 20, 2008 was published information about lawsuit filed by Swiss-based Touring Superleggera Markenverwaltungsgesellschaft AG against several companies including Lamborghini on trademark infringements. The company owns the trademarks of the Carrozzeria Touring.

The Lamborghini Gallardo LP560-4 was revealed at the 2008 Geneva Auto Show. It is powered by a new 5.2L V10 with FSI direct injection, generating 552hp and 398Nm of torque. The engine is heavily based on the new Audi RS6 V10. Unlike the precedent engine, this engine no longer has split crankpins, so it is not even firing, but Lamborghini says that due to the stiffer crankshaft it has less vibrations than the previous engine. Also, a revised transmission and four wheel drive system as well as a 20kg weight loss are expected. The 4 at the end of the name refers to the Gallardo's permanent four-wheel-drive system. It also incorporates a new front bumper heavily influenced by the Lamborghini Reventón. Pricing of the Gallardo LP560-4 will start at around US$222,000.

In December, 2004, several Gallardo supercars were donated by Lamborghini to the Italian police in honor of the force's 152nd anniversary. The Gallardo Police Cars will be used by the traffic police (Polizia Stradale) during emergencies and alarm situations on the Salerno-Reggio Calabria highway, also under the powers of the special safety operative which is already being employed along this tract of highway and above all for the transport of organs destined to transplants.