John Paul Herbert (born June 25, 1964 in Romford, London, England) is a British former racing driver from England. He competed in Formula One, where he won three races, and more recently in sports cars. He enjoyed much success in lower-level motor racing but never managed to achieve the same level of performance at the top level of motorsport.

Herbert driving for Lotus at the 1994 British Grand Prix.

During the mid-1980s, Johnny Herbert was widely regarded as a coming man of motor racing, likened by some to the Scot Jim Clark. Winning the Formula Ford Festival at Brands Hatch in 1985, Herbert caught Eddie Jordan's attention, and together they won the 1987 British Formula Three title. Disaster struck in 1988, though, as Herbert, then a championship hopeful in International Formula 3000 was caught up in a major accident at Brands Hatch, badly breaking his legs in a fearsome impact with the barriers. It was an act of huge bravery that saw him back in a racing car at the beginning of 1989, despite the fact he could barely walk. Even more remarkably, he was now in Formula 1, scoring points on his debut in Brazil driving for the Benetton team, then managed by his long time mentor and friend Peter Collins. 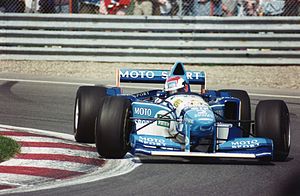 Johnny Herbert driving for Benetton in 1995

However, Herbert's performances could not keep up that standard, and with the Benetton team under new management, he was dropped after failing to qualify for the Canadian Grand Prix. Herbert returned to Formula 3000, this time in the highly regarded Japanese series. It wasn't long before he received another call from Grand Prix racing, this time Tyrrell. From 1990 to 2000, Herbert was a fixture in Formula One, switching to the dwindling Lotus team, now managed by Peter Collins. After 3 years of frustration, Herbert left Lotus in mid 1994, joining Ligier and then Benetton for the last few races of the season. Although he failed to score any points in 1994, he was retained as Michael Schumacher's team-mate for 1995. At the British Grand Prix, he inherited a hugely popular Grand Prix win after Michael Schumacher collided with Damon Hill. He followed this in similar circumstances at Monza, finishing 4th in the championship.

After being dropped by Benetton, Herbert drove for Swiss outfit Sauber in 1996-1998, scoring two podium places. Moving to Stewart Grand Prix in 1999, he scored his third and final Grand Prix win in a remarkable wet/dry European Grand Prix. Staying at Stewart as they became Jaguar, Herbert endured another frustrating and pointless season, ending the year being stretchered off at Malaysia after a suspension failure caused him to crash heavily.

Herbert driving for Audi in the 2004 Petit Le Mans.

Since retiring from Grand Prix racing, Herbert has concentrated on Sports Cars, trying to repeat his Le Mans 24 Hours win of 1991 in a Mazda. The last two years have seen him as one of the front runners in the American Le Mans Series (ALMS), where he has won several events and was a challenger for the 2003 crown.

In 2005, Herbert was appointed to the post of Sporting Relations Manager at Jordan Grand Prix, which was then renamed Midland F1 for the 2006 World Championship. However, in September of that year Spyker Cars bought the team, and renamed it Spyker MF1. Another of the new owners' decisions was to not renew Herbert's contract.