Motorcycle sport is a broad field that encompasses all sporting aspects of motorcycling. The disciplines are not all "races" or timed-speed events, as several disciplines test a competitor's various riding skills.

The FIM is the international sanctioning body for motorcycle racing and most nations have their own governing bodies. Other breakaway/independent bodies exist on both a national and an international level.

Motorcycles vary greatly in design for each discipline. Broadly speaking, motorcycle sport can be divided into two categories: tarmac-based road disciplines and off road. Within each of these disciplines, there are usually sub-groups. These may include classic machinery (i.e., non-current to various extents), miniature machinery (e.g., pocketbike racing ), sidecars and quads/ATVs.

Road racing is the racing of sport bikes (derived from the typical road going machines) on tarmac, either on circuits or on closed public roads (sometimes called true road racing). MotoGP and Superbike racing are prime examples of circuit racing while events like the Isle of Man TT, North West 200 and the Macau Grand Prix are prime examples of closed public road racing. Within road racing there is a variety of sub-disciplines including endurance racing.

Drag racing and/or sprints is a racing venue where two participants line up at a dragstrip with a signaled starting line. Upon the starting signal, the riders accelerate down a straight, quarter-mile long paved track where their elapsed time and terminal speed are recorded. The rider to reach the finish line first is the winner. This can occur upon purpose built venues (e.g., Santa Pod), temporay venues (e.g., runways or drives of country houses). In addition to "regular" motorcycles, top fuel motorcycles also compete in this category.

In hill climbing, a single rider climbs or tries to climb a road going up a hill in the fastest time and/or the furthest up the hill before ceasing forward motion. These events are typically on closed public roads and private roads. The same concept is also used off-tarmac, usually on steeper hills.

A road rally is a navigation event on public roads whereby competiors must visit a number of checkpoints in diverse geographical locations while still obeying road traffic laws (not to be confused with car rallies such as WRC).

A Supermoto rider on a tarmac section

Supermoto is a racing category that is a crossover between road-racing and motocross. The motorcycles are mainly motocross types with road-racing tyres. The racetrack is a mixture of road and dirt courses (in different proportions) and can take place either on closed circuits or in temporary venues (such as urban locations).

The riding style on the tarmac section is noticeably different from other forms of tarmac-based racing, with different line in corners, sliding of the back wheel around the corner, and using the leg straight out to corner (as opposed to the noticeable touching of the bent knee to the tarmac of road racers).

Land Speed is where a single rider accelerates over a 1 to 3 mile long straight track (usually on dry lake beds) and is timed for top speed through a trap at the end of the run. The rider must exceed the previous top speed record for that class or type of bike for their name to be placed on the record books. See—[1] for an example. 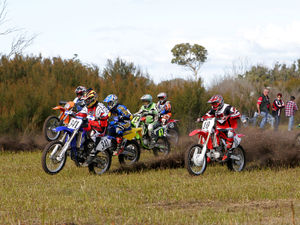 Start of a Motocross race

The direct equivalent of road racing, but off road - i.e. a number of bikes on a closed circuit racing. motocross (or just MX) circuits are constructed on a variety of non tarmac surfaces (sand, mud, grass, etc but tend to incorporate elevation changes either natural or artificial). Advances in motorcycle technology (especially suspension) have lead to the predominance of circuit with added "jumps" on which bikes can get airborne. Motocross has another noticeable difference from road race (as well as jumps) in that the starts are done en mass, alongside each other, propelling around 40 riders into the first corner in a "destruction derby" fashion. The winner is the first rider across the line (generally after a given amount of time or laps or combination)

Motocross has a plethora of classes based upon machine displacement (typically 125cc/250Fcc MX2 or MX Lites and 250cc/450Fcc MX1 or MX), age of competitor (typically for youth), sidecars, quads/ATVs, ability and machine age (classic for pre 1965/67, Twinshock for bikes with two shock absorbers, etc)

Supercross (or SX) is simply indoor motocross. Typically situated in a variety of stadiums and open or closed arenas, it is notable for its numerous jumps. In North America this has been turned into an extremely popular spectator sport, regally filling large baseball stadiums, leading to Motocross being now termed the "outdoors". However, in Europe it is less popular, as the predominate focus there is on Motocross.

Beachcross is simply Motocross held on a beach. It generally consists of a giant straight along the beach (which is susceptible to the tides) with a return to the start through a variety of dunes and man-made jumps (like Supercross). Due to the sand the ruts become very large when compared to typical motocross or supercross. The number of competitors is much larger than a motocross or enduro - often amounting to several hundreds.

Notable examples are the Weston Beach race (Weston-super-Mare, in the UK) and Le Touquet in France.

The racing of snowmobiles, also known as "Snocross" is common where snow can be found.

A competition based upon points for acrobatic ability on a MX bike over jumps.

Enduro is a form of off road motorcycle sport that primarily focuses on the endurance of the competitor. In the most traditional sense ("Time Card Enduros"), competitors complete a 10+ mile lap, of predominately off road going, often through forestry. The lap is made up of different stages, each with a target time to complete that stage in exactly, there are penalties for being early and late, thus the goal is to be exactly "on time". Some stages are deliberately "tight", others are lax allowing the competitor to recuperate. There are also a variety of special tests, on variety of terrain to further aid classification, these are speed stages where the fastest time is desired. A normal event lasts for 3 to 4 hours, although longer events are not uncommon. Some events, particularly national and world championship events take place over several days, requiring the competitors motorcycles to kept securely and thus any maintenance work has to be carried out within a very limited window of time or during the event.

There is a World Enduro Championship (WEC) that has events across Europe, with a few excursions to North America. The most significant event in the Enduro calendar is the International Six Day Enduro ISDE (formerly the ISDT), where countries enter teams of riders (i.e. Enduro's "World Cup"), as well as club teams - the event combines amateur sport with the professional level sport, it also takes place in a much more geographically dispersed range of locations.

In addition to traditional Time Card Enduros held over a long lap, a variety of other forms of sport have been taken up; notably "Short Course Enduros", a shorter (in lap length) form of Time Card Enduros and "Hare and Hounds".

Hare and Hounds (also known as Hare scrambles) are more of an extended Motocross, over Enduro type terrain. Officially the competitors are trying to chase a target number of lap within a time limit (often significantly shorter than a Time Card Enduro), however in practise it involves racing in the Motocross sense, with mass starts and a definitive finish line. Results are east to calculate and for the riders to follow, thus the competitors feel they are racing each other rather than the clock as in Time Card Enduros. Due to the simplicity of the event format, its low land use requirements and easy cross over nature with Motocross, this branch of the sport is experiencing tremendous growth.

At the other end of the scale, Rally Raid are much bigger than enduros. Typically using larger bikes than other off road sports, these events take place over many days, travelling hundreds of miles across Highways but primarily open off road terrain. The most famous example is the Dakar Rally, travelling from Western Europe (often Paris) to Dakar in Senegal, via the Sahara desert, taking almost two weeks. A FIM World Rally championship also exists encompassing many events across the world, typically in desert nations. These events often run alongside "car" rallys (under the FIA).

Known in the US as "Observed Trials", it is not racing, but a sport nevertheless. Trials is a test of skill on a motorcycle whereby the rider attempts to traverse an observed section without placing a foot on the ground (and traditionally, although not always, without ceasing forward motion). The winner is the rider with the least penalty points.

Time and observation trials are trials with a time limit. The person who completes the route the quickest sets the "standard time" and all other competitors must finish within a a certain amount of time of the standard time to be counted as a finisher (they received penalty points for every minute after the quickest finisher). This is combined with the penalty points accrued from the observed sections to arrive at a winner, who is not alway the quickest rider or the rider who lost the less marks on observation but the rider who balanced these competing demands the best. One of the most famous time and observation trials is the "Scott" trial held annually in North Yorkshire.

Indoor Trials are trials held in stadiums (not necessarily with a roof) which by their very nature use man made artificial sections in contrast to outdoor trials with rely heavily on the natural terrain.

Flat Track racing is done on quarter-mile, half-mile, and one mile dirt ovals, typically held at fairgrounds and speedways. It also includes TT courses which include at least one right turn and a jump. It is the oldest form of American motorcycle racing. Speeds of over 100 miles per hour are common on mile and half mile tracks. The American Motorcyclist Association has been the sanctioning body of Flat Track racing in the United States, each year awarding the coveted #1 plate to their Grand National Champion.

Indoor races consist of either a polished concrete floor with coke syrup or other media sprayed or mopped onto the concrete for traction for the tyres of the motorcycles, or on dirt that has been moistened and hard packed, or left loose often called a cushion. Motorcycles race on an oval track, or over a single jump with a right hand turn called a TT track. Similar to size of the Arenacross Arenas or sometimes smaller the riders must have accurate throttle control to negotiate these tight Indoor Race Tracks.

Grasstrack is "outdoor" speedway. The track are longer (400m+, hence it is often also refereed to as Long Track at world level), often on grass (although other surfaces exist) and even feature elevation changes. Machinery is very similar to a speedway bike (still no brakes, but normally two gears, etc.)

Track racing (most like grass track) on a beach, not to be confused with Beachcross.

Auto Race is a Japanese specific type of track racing held on an asphalt oval course and seen as a gambling sport.

As per tarmac but often steeper (e.g., Pikes Peak in the US) but not necessarily (eg the classic reincarnations such as Red Marley, in the UK).

This discipline brings together riders from the motocross and track racing fraternity making a classification somewhat irrelevant.

A Supersport bike at Phillip Island.