Emilia-Romagna is an administrative region of Northern Italy comprising the two historic regions of Emilia and Romagna. It forms a rough triangle, bounded on the East by the Adriatic Sea, on the North by the Po river and on the South by the Appennine range; these two linear features, with the Via Aemilia, and the A1 highway and the railway that run close and parallel to it, give an unusually regular structure to the whole region except for the easternmost part. With 4,187,000 inhabitants in 22,123 km² (8545 sq. mi) as of the 2006 census, it is a densely populated region (especially in the plain half). Emilia-Romagna is one of the richest regions of Italy, and its cuisine one of the most characteristic.

Agriculture is the most important economic activity: cereals, potatoes, maize, tomatoes and onions are the most important, along with fruit and grapes for the production of wine (of which the most famous are perhaps Lambrusco, Sangiovese and Albana). Cattle and hog breeding are also highly developed. 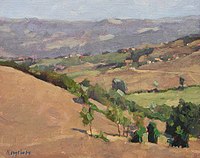 The industry of Emilia-Romagna is also healthy, especially the food industry, particularly concentrated in Parma and Bologna, mechanical and automotive (e.g., Ferrari, Ducati, Lamborghini, Maserati), and tourism especially along the Adriatic coastline.

The name Emilia-Romagna has roots in the Ancient Rome legacy in these lands. Emilia refers to via Emilia, an important Roman way connecting Rome to the northern part of Italy. Romagna is a corruption of Romània; when Ravenna was the capital of the Italian portion of the Byzantine Empire, the Lombards extended the official name of the Empire to the lands around Ravenna.

Politically, Emilia-Romagna is a stronghold of the left, despite being one of the wealthiest parts of Italy. Some believe this is because of a strong tradition of anti-clericalism dating from the 19th century, when part of Emilia-Romagna belonged of the Papal States (mostly Romagna and Bologna, in Emilia there were two independent states ). At the April 2006 elections, Emilia-Romagna gave 60% of its votes to the left-wing Olive Tree coalition of Romano Prodi.

The region is also characterised by a unique economic attitude: the economy of Emilia-Romagna is largely based on its tens of thousands of cooperatives. In Emilia-Romagna, two out of three people belong to a co-op. Bologna alone hosts 8,000, including the one-million member left-wing Legacoop and the 250,000-strong Catholic Confcooperative. The nature of the region's economy is considered responsible for the high standard of living enjoyed by the inhabitants.

The population of Emilia Romagna is largely Italian, but there has been a rise in the number of migrants in the area, that nowadays consists in about 257,000 persons: