Campania is a region of Southern Italy, bordering on Lazio to the north-west, Molise to the north, Puglia to the north-east, Basilicata to the east, and the Tyrrhenian Sea to the west. The region covers 13,595 km² and has a population of 5.7 million. 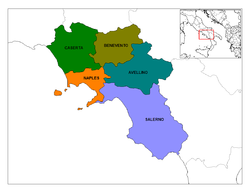 The name derives from Latin, as it was called by Romans Campania felix ("fortunate countryside"), a name that is shared by the French province of Champagne.

Tourist attractions include the Sibyl's cave at Cumae, the Greek temples at Paestum, the Roman ruins at Pompeii and Herculaneum, the volcanoes of Vesuvius, Campi Flegrei and Ischia, the Amalfi Coast (Costiera Amalfitana) from Sorrento to Salerno and the islands of Capri, Ischia and Procida.

Campania was part of Magna Graecia, the Greek colonies of southern Italy; the first Greek colony was founded at Cumae, north of present day Naples, in the 8th century BCE. Etruscans and Samnites gave way to the expanding Roman Republic.

In 217 BCE Hannibal entered Campania and by burning the crops of these fertile lowlands hoped to provoke the Roman commander Fabius Maximus Cunctator (the delayer). In this Hannibal failed; nor did he sufficiently weaken Roman prestige for any of the Campanian towns to rebel. Fabius, in turn failed to trap Hannibal in Campania when Hannibal used the ruse of tying burning brands to the horns of cattle, so drawing off the force guarding a vital pass out of Campania. In 216 BCE, however, after Hannibal's victory at the battle of Cannae, Capua, the leading city of Campania, wavered. They first requested complete equality with Rome, including the demand that one of the Roman consuls should be elected from Capua. When Rome rejected this, they opened negotiations with Hannibal who was more than willing to endorse the full independence they sought. The defection of Capua did not however inspire other Campanian towns so Capua was isolated and the Romans were eventually, in Hannibal's absence, able to build siege works round the city. As Hannibal proved unable to break the siege, Capua was eventually starved into submission in 211 BCE. 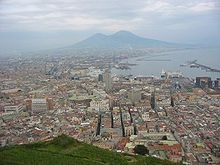 Naples and the Vesuvius are international symbols of Italy

Campania was the breadbasket of Rome, until the acquisition of Egypt brought greater supplies of grain, resulting in the conversion of smallholdings in Campania to the characteristic latifundia that lasted from the Empire to modern times. Goths and the Byzantine Empire struggled for control during the 5th and 6th centuries, followed by the Lombards, who established the Duchy of Benevento. The Normans (Robert Guiscard) conquered and re-unified Campania during the 11th and 12th centuries, seizing southern Italy from the Byzantines, forming the Kingdom of Sicily. After the Hohenstaufen confrontation with the Papacy, the kingdom passed to Charles of Anjou who retained his mainland territories after he lost Sicily (1282) as the Kingdom of Naples, reunited with Sicily by Alfonso V of Aragon (1442) who styled himself the 'King of two Sicilies', a title that was subsequently revived during the Spanish domination (1504 – 1713) of both kingdoms. The Bourbons succeeded in 1713: prior to the unification of Italy, Campania formed part of the Bourbon Kingdom of the Two Sicilies.

Despite large and prosperous cities like Napoli, Campania has not attracted many immigrants. The number of immigrants is low comparing to the northern regions of Italy and is like the other southern regions where immigrant numbers are minimal.

Those who are Moroccan, Albanian, and Polish are next largest, but again, make extremely small numbers.

Campania is often acknowledged as the birthplace of pizza.

It is also home to the Lacryma Christi wine denomination.

Campania is regarded throughout Italy as the producer of the best Mozzarella di Bufala (Mozzarella made from buffalo milk).