Rimini is a city in the Emilia-Romagna region of Italy and capital city of the Rimini Province. 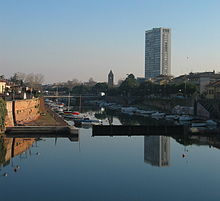 It is located on the Adriatic Sea near the coast between the rivers Marecchia (the ancient Ariminus) and Ausa (Aprusa). Coast navigation and fishing are traditional industries and, together with Riccione, it is probably the most famous seaside resort on the Adriatic Riviera, among Italians.

Rimini’s history began at the beach. Up to 800,000 years ago, primitive man lived in the coastal area as far back as the hillside of Covignano.

In 268 BC at the mouth of the Ariminus river, in an area that had previously been inhabited by the Etruscans, the Umbrians, the Greeks and the Gauls, the Romans founded the colony of Ariminum, probably from the name of a nearby river, Ariminus (today, Marecchia). It was seen as a bastion against invading Gaul and also as a springboard for conquering the Padana plain. Rimini was a road junction connecting central Italy (Via Flaminia) and northern Italy (Via Aemilia that led to Piacenza and Via Popilia) and it also opened up trade by sea and river.

In the sixth century BC, it was taken by the Gauls; after their last defeat (283 BC), it returned to the Umbri and became in 263 BC a Latin colony, very helpful to the Romans during the late Gallic wars.

The city was involved in the civil wars but remained faithful to the popular party and to its leaders, firstly Marius and then Caesar. After crossing the Rubicon, the latter made his legendary appeal to the legions in the Forum of Rimini.

Rimini, which drew the attention of many emperors, Augustus who did much for the city and Hadrian in particular, was experiencing a great period in its history, embodied by the construction of prestigious monuments such as the Arch of Augustus, Tiberius' Bridge and the Amphitheatre and Galla Placida built the church of San Stefano.

Crisis in the Roman world was marked by destruction caused by invasions and wars, but also by the testimony of the palaces of the Imperial officers and the first churches, the symbol of the spread of Christianity that held an important Council in Rimini in 359.

When the Goths conquered Rimini in 493, Odoacer, besieged in Ravenna, had to capitulate. During the Gothic War Rimini was taken and retaken many times. In its vicinity the Byzantine general Narses overthrew (553) the Alamanni. Under Byzantine dominion it belonged to the Pentapolis.

In 728 it was taken with many other cities by the Lombard King Liutprand but returned to the Byzantines about 735. King Pepin gave it to the Holy See, but during the wars of the popes and the Italian cities against the emperors, Rimini sided with the latter.

In the thirteenth century it suffered from the discords of the Gambacari and Ansidei families. The city became a municipality in the fourteenth century and with the arrival of the religious orders, numerous convents and churches were built, providing work for many illustrious artists. In fact, Giotto inspired the fourteenth-century School of Rimini, which was the expression of original cultural ferment.

The Malatesta family, whose most famous member was Sigismondo Pandolfo, a condottiere and patron of art (he had Alberti build the famous Tempio Malatestiano) who was lord of Rimini between 1432 and 1468, emerged from the struggles between municipal factions.

In 1295 Malatesta I da Verucchio was named "Signore" (feudal lord) of the city, and, despite interruptions, his family held authority until 1528. Among his successors were: Malatesta II (1312-17); Pandolfo I, his brother (d. 1326), named by Louis the Bavarian imperial vicar in Romagna; Ferrantino, son of Malatesta II (1335), opposed by his cousin Ramberto and by Cardinal Bertando del Poggetto (1331), legate of John XXII; Malatesta III, Guastafamiglia (1363), lord also of Pesaro; Malatesta IV l'Ungaro (1373); Galeotto, uncle of the former (1385), lord also of Fano (from 1340), Pesaro, and Cesena (1378); his son Carlo (1429), the noblest scion of the family, laboured for the cessation of the Western Schism, and was the counsellor, protector, and ambassador of Gregory XII, and patron of scholars; Galeotto Roberto (1432); his brother Sigismondo Pandolf (1468) had the military and intellectual qualities of Carlo Malatesta but not his character. He was tyrannous and perfidious, in constant rebellion against the popes, a good soldier, poet, philosopher, and lover of the fine arts, but a monster of domestic and public vices; in 1463 he submitted to Pius II, who left him Rimini; Robert, his son (1482), under pope Paul II nearly lost his state and under Sixtus IV became the commanding officer of the pontifical army against Alfonso of Naples, by whom he was defeated in the battle of Campo Morto (1482); Pandolfo V, his son (1500), lost Rimini to Cesare Borgia (1500-3), after whose overthrow it fell to Venice (1503-9), but was retaken by pope Julius II and incorporated with the territory of the Holy See. After the death of pope Leo X, Pandolfo returned for several months, and with his son Sigismondo held tyrannous rule. Pope Adrian VI gave Rimini to the Duke of Urbino, the pope's vicar. In 1527 Sigismondo managed to regain the city, but the following year the Malatesta dominion passed away forever. Rimini was thenceforth a papal city, subject to the legate (papal province governor) at Forlì.

At the beginning of the 16th century, once the Malatesta family had been banished, Rimini, now a small town of the Papal States, had a local government under the Apostolic Legate (temporal governor in a province of the Papal States) of Ravenna. Towards the end of the 16th century, the municipal square (Piazza Cavour), which had been closed off on a site where the Poletti Theatre was subsequently built, was redesigned. The statue of Pope Paul V has stood in the centre of the square next to the fountain since 1614.

In the 16th century, the 'grand square' (now the Piazza Tre Martiri in honor of three civilians hanged by the retreating Nazis at the end of World War II), which was where markets and tournaments were held, underwent various changes. For example, a small temple dedicated to Saint Anthony of Padua and the Clock Tower block were built, giving the square its present shape and size.

Until the 18th century, raiding armies, earthquakes, famines, floods and pirate attacks ravaged the city. In this gloomy situation and due to a weakened local economy, fishing took on great importance, a fact testified by the construction of functional structures such as the fish market and the lighthouse.

In 1797, Rimini along with the rest of Romagna was influenced by the passage of the Jacobin troops and became part of the Cisalpine Republic. The Napoleonic government suppressed the monastic orders, confiscating their property and thus dispersing a substantial heritage, and demolished many churches including the ancient cathedral of Santa Colomba. On 30th March 1815, Joachim Murat launched his proclamation to the Italian people from Rimini, inciting them to unity and independence. In 1845 a band of adventurers commanded by Ribbotti entered the city and proclaimed a constitution which was soon abolished. In 1860 Rimini and the Romagna were incorporated with the Kingdom of Italy.

An idea of what the city was like in the 19th century is provided by the palaces built along Corso d’Augusto and in particular by the theatre, which was designed by Luigi Poletti and succeeded in translating into Neoclassical form the ambitions of the ruling classes.

However, the biggest revolutionary element for the city was the foundation in 1843 of the first bathing establishment and the Kursaal, constructed to host sumptuous social events, became the symbol of tourist Rimini. In just a few years, the marina underwent considerable building work making Rimini 'the city of small villas'. At the beginning of the twentieth century, The Grand Hotel, the city’s first important accommodation facility, was built near the coast and soon became the emblem of a new kind of tourism.

During World War II, the city was torn apart by heavy bombardments and by the passage of the front along the Gothic Line but after liberation on September 21, 1944, impressive reconstruction work began, culminating in the explosive development of the tourist economy that created a new urban reality.

The diocese is a suffragan of Ravenna.

Among the bishops were: Stennius, at Rome in 313; Cyriacus, one of his successors, sided with the Arians; under St. Gaudentius the famous Council of Rimini against Arianism was held in 359 (for over 400 Western bishops, parallel with the eastern bishops' council of Seleucia); he was later put to death by the Arians for having excommunicated the priest Marcianus; Stephanus attended at Constantinople (551); the election of Castor (591) caused much trouble to St. Gregory I, who had to send to Rimini a "visitor"; Agnellus (743) was governor of the city, subject to the Archbishop of Ravenna; Delto acted frequently as legate for pope John VIII; Blessed Arduino (d. in 1009); Uberto II is mentioned with praise by St. Peter Damian; Opizo was one of the consecrators of the Antipope Clement III (Guiberto, 1075); Ranieri II degli Uberti (1143) consecrated the ancient cathedral of St. Colomba; Alberigo (1153) made peace between Rimini and Cesena; Bonaventura Trissino founded the hospital of Santo Spirito; under Benno (1230) some pious ladies founded a hospital for the lepers, and themselves cared for the afflicted. At the end of the thirteenth century the Armenians received at Rimini a church and a hospital.

From 1407 Gregory XII resided at Rimini. Giovanni Rosa united the eleven hospitals of Rimini into one. Under Giulio Parisani (1549) the seminary was opened (1568). Giambattista Castelli (1569) promoted the Tridentine reforms and was nuncio at Paris. Andrea Minucci was severely tried during the French Revolution; under him the Malatesta church (San Francesco) became the cathedral.

In the early 20th century the diocese had 124 parishes, 125,400 inhabitants, 336 priests, 10 houses of religious with 56 priests, 24 houses of religious women, who care for the hospitals, orphanages and other charitable institutions, or communal and private schools. There are also 1 school for boys and 3 for girls. 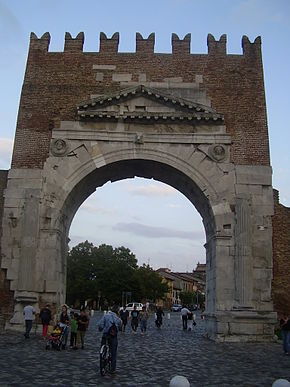 The Arch of Augustus.

Rimini is famous for its budding clubbing scene, and is known as the "Ibiza of the Adriatic". The city is notable in disco music history for its Cosmic Club who's DJ Daniele Baldelli played records from a moving elevator to the young experimental audience. Baldelli's important contribution to the world of DJ'ing is perhaps overshadowed by his American counterparts, Frankie Knuckles and Ron Hardy.

It is served by the Federico Fellini International Airport, airport of Rimini and San Marino.