A1 Grand Prix, abbreviated to A1GP, is an open-wheel auto racing series. It is unique in its field in that competitors represent their nation as opposed to a constructor, which is traditional in most formula racing series including Formula One. As such, it is often promoted as the World Cup of Motorsport. The series is ratified and regulated by the Fédération Internationale de l'Automobile (FIA), and races (collectively known as A1GP World Cup of Motorsport) are held in the traditional Formula One off season, the northern hemisphere winter.

A world map showing the distribution of A1 GP teams past (blue) and present (red).

The nation-based A1GP concept was founded by Sheikh Maktoum Hasher Maktoum Al Maktoum of Dubai, initially in 2004. Once the series had received the backing of the FIA in 2005, a management structure including new executive directors Brian Menell and Tony Teixeira was appointed to oversee the sale of franchises for the operation of international teams. Paul Cherry, formally of the Champ Car Racing Team, Sigma Autosport, was later brought in as the General Franchise Manager in 2005. AutosportRacing.com later received articles about Mr Cherry's job at A1 GP, and there were many quotes from many clients who work with A1 saying that they were "confused by what his job actually was". Thirty franchises were made available; twenty-three of them were restricted to specified nations, while the other seven were opened to tender for nations that had not been initially targeted.

In total, twenty-five of the franchises were purchased in time for the 2005-06 A1 Grand Prix season, which began on September 25, 2005 with the A1 Grand Prix of Nations Great Britain at the Brands Hatch circuit in Kent, United Kingdom. The first season was planned for 12 rounds (24 races, with two each weekend); however the cancellation of a race scheduled for Curitiba, Brazil in January 2006 reduced this number to 11. Nelson Angelo Piquet won the inaugural race of the series for A1 Team Brazil. However, their winning form was not to continue. Wins at Estoril and Malaysia saw A1 Team France build up a sizeable gap. By the start of the winter break, France had run away with the lead with A1 Team Switzerland 28 points behind. At the final race of the season in Shanghai, A1 Team France were crowned the first-ever A1 Grand Prix world champions with 172 points. Switzerland were second coming in 121 points and A1 Team Great Britain third with 97 points.

Katherine Legge was the first woman to drive A1 Grand Prix cars during test session in december 2005 on Dubai Autodrome.

A number of changes were made for the 2006-07 season to race durations and distances to improve the spectacle for attendees and TV viewers. The 2006-07 schedule was released on July 7, 2006, with the first race at Circuit Park Zandvoort on 1 October, 2006, and the last race at Brands Hatch on 29 April, 2007. New teams A1 Team Singapore and A1 Team Greece have joined the competition but A1 Team Turkey failed to secure funding for this season. A1 Team Austria, A1 Team Japan, A1 Team Portugal and A1 Team Russia did not return for the second season. However after securing funding A1 Team Portugal competed in the final four rounds of the second season in South Africa, Mexico, China and Britain.The season ended at Brands Hatch on 29 April 2007. A1 Team Germany won it with 128 points, 35 points lead ahead Team New Zealand.

On 29 September, Sheikh Maktoum announced he was resigning his position as chairman and chief executive of the series, seeking to have his place taken by increased shareholder interests. "I am happy that I have built the series with fans in mind. I feel like I have fulfilled my promise to them by bringing A1GP from concept to reality and am confident that the World Cup of Motorsport will go from strength to strength. Having devoted all my efforts to making A1GP the success it is today, this transaction will allow me to devote more time to my Dubai International Holding Company which currently manages a substantial portfolio of assets and new ventures and which continues to actively pursue other significant investment opportunities." Maktoum announced his planned resignation in September and his exit from the organisation was confirmed in December.

27 nations have, at least, started one race in World Cup of Motorsport. This table represent all participative nations. Those in bold are the actual teams for the 2007-08 season.

The A1 Grand Prix car in the livery of the Great Britain team.

The A1GP formula provides for one car to be delivered to each team. Each such car is mechanically identical, built with many technical restrictions designed to limit performance, reduce running costs, and prevent any one or number of teams gaining an advantage through better equipment. This regulation provides a level playing field in which it is hoped driver skill and team effort becomes the primary factor for success.

Specifically, the cars have a 600 kg monocoque chassis designed by Lola and model-370/660R13 slick tires from Cooper. Zytek provide a performance-limited 3.4 litre V8 engine, however its performance limitation can be overcome by the driver pressing a button on their steering wheel. This so-called boost button or overtake button increases the engine output, revs and horsepower while the accelerator remains depressed, increasing speed and facilitating easier overtaking. It is similar to the 'power-to-pass' or 'push-to-pass' in Champ Cars, intended for improving the spectacle rather than lap-times.[1] The overtake button may only be used a limited number of times in each race, which is pre-programmed beforehand and identical for each car.

The A1GP organisers have announced a six year deal with Ferrari to design & manufacture the next generation of A1GP car, from 1st January 2008 until 14th of March 2014. As yet details of the car are not known other than it will be a V8 engine producing power in the region of 550BHP. While the engine will be solely created by Ferrari, the chassis will be built by a third party Italian company with design input from Ferrari. All teams will be required to carry "Powered by Ferrari" insignia on their cars & merchandise. The official safety vehicle has already changed to be a Ferrari 599 GTB. 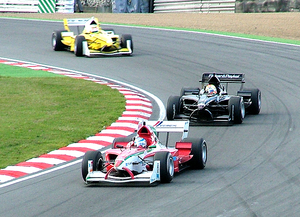 A1 Grands Prix of Nations take place over a three-day period, from Friday to Sunday. The teams are given five sets of dry weather slick tires, and two sets of wet weather treaded tires per weekend. However, if the weather is extreme, the team can be given more wet weather tires at the expense of the slick tires. The race weekend starts with two one-hour practice sessions held on the Friday, and then another on the Saturday morning. A two-hour qualifying session takes place on Saturday afternoon, and two races take place on Sunday. Primarily, the three practice sessions are for car setup and track familiarisation before the official competition begins with Saturday qualifying. Three different drivers may participate in the three practice sessions; the driver elected for qualifying or for one of the races must have taken part in at least one such practice session.

A1 Grand Prix uses a unique qualifying format, which begins at 14:00 local time on the Saturday of the race weekend, to determine the grid lineup for Sunday's races, the Sprint Race and the Main Race. The qualifying period is split into four, fifteen-minute sessions. Each car is permitted three laps per session; including the laps required for leaving the pits, and for re-entering it, this allows one lap to set a competitive time. There is a ten minute break between sessions, which adds up to a total of 90 minutes for qualifying. In the first two sessions the grid for the Sprint Race is determined using the aggregate of the lap times set by each car. In the final two sessions the grid for the Main Race is determined in the same way. However, if there is a red flag due to an accident on the circuit, the timing to the end of qualifying will continue to run.

The Sprint Race uses the grid determined in the previous day's qualifying session, and is held in the early afternoon. The race begins from a rolling start, and its duration is the maximum number of laps that equates to a race distance of about 50 kilometres; however, if the race duration passes 29 minutes (perhaps due to safety car periods or slower lap times due to inclement weather) the race ends immediately on the next lap. These figures were 75 kilometres and 30 minutes respectively for the 2005-06 season, but have since been reduced. Drivers are restricted to four uses of the overtake button in the Sprint Race.

The Main Race, sometimes known as the Feature Race, is scheduled for a number of hours later; this period has been recently increased to allow additional setup time and to allow decisions by stewards to be completed (and punishments, where necessary, to be dealt) ahead of the Main Race. At the start of the 2006 season, the grid for the main race was determined by the results of the Sprint Race – each team's sprint race grid position, finishing position and fastest lap ranking were given points (1 point for first, 2 points for second, and so on), and the three were added: the driver with the lowest points total began the Main Race on pole position with the remaining drivers on the grid in ascending points order. However this system was deemed too confusing for spectators at the circuit, so following the 2006-7 China event the series reverted to a simpler qualifying system for the Main Race: Drivers are placed on the grid in the same order as they finished the Sprint Race, with 1st in pole position. The system was changed again for the 2007-08 season, the positions are now decided in the second half of Saturday's qualifying. The race begins with a standing start, and is limited (in the same fashion as the Sprint Race) to around 180 kilometres or 69 minutes, whichever is shorter. Drivers are permitted eight uses of the overtake button in the Main Race.

Each team must, in the duration of the Main Race (but not on the first or last lap), complete two compulsory pit stops, in which all four tires on the car must be changed. Only four mechanics may service the car during the stop, none of which (save the so-called "lollipop man" that directs the car into its pit) may be present before the car comes to a complete halt. Refuelling is also not permitted; infringements of these rules or of the pit-lane speed limit result in the imposition of a drive-through penalty.

There is no requirement for a pit stop during the Sprint Race.

Unlike almost all other forms of auto racing, drivers do not score points individually; instead the points they earn are ascribed to their national team. This means that teams can change drivers between rounds, which is often necessary because some drivers have commitments in other formulae, and still accumulate points to their score.

Chairman Tony Teixeira has announced that Italian manufacturer Ferrari will design and build the engines for the 2008-09 season and the confirmed A1GP season. They will also be involved in the design of the new chassis for both, however it will not be built by them. A six-year agreement was confirmed. The partnership with Ferrari extends to an exclusive licensing agreement for all A1GP merchandise to use the Ferrari name and phrase ‘Powered by Ferrari’ from January 2008.

Ferrari involvement will ease some of the concerns regarding A1GP's ongoing financial viability and the continued input of existing backers. Teixeira reported a USD 212 million loss for the initial season, with A1GP officials announcing a debt financing initiative and an initial public offering backed by the Nomura Group and RAB Capital hoping to finance both the initial debt and the 2005-06 season loss.