Riccardo Patrese (born April 17 1954) is an Italian former Formula One (F1) racing driver, from 1977 to 1993. He started 256 Formula One Grands Prix, making him the most experienced F1 driver in history. In 2005 he returned to racing in the inaugural season of the Grand Prix Masters formula for retired F1 drivers.

Patrese was born in Padua, Veneto. He made his debut in 1977 with the Shadow racing team at the Monaco Grand Prix when the team were forced to change drivers mid-season. Later that year team-leader Jackie Oliver left Shadow to form the Arrows team, taking Patrese with him. Shadow took Arrows to court, arguing that the design of the Arrows car was so similar to their own that Arrows had stolen it. The court agreed, forcing Arrows to redesign their car, which they did in just six weeks.

In 1978 Patrese very nearly won Arrows' second race, the South African Grand Prix, until engine failure forced him to retire 15 laps from the end. Later that year, Patrese was involved in a pile-up when he came together with James Hunt and other drivers' cars at the start of the Italian Grand Prix. One of the other drivers involved was Ronnie Peterson, who, although his injuries were not in themselves life-threatening, died from an embolism the following day. Although Patrese was never officially blamed for the accident, Hunt led a fierce campaign against him and succeeded in having Patrese banned from the next race. TV replays suggested that it was Hunt who had caused the accident, but Hunt never accepted this and later continued to criticise Patrese when commentating on F1 races for BBC TV.

In 1982 Patrese moved to Brabham and gained a lucky win at that year's Monaco Grand Prix when there were five leaders including Andrea de Cesaris and then Didier Pironi who both ran out of fuel whilst leading the final lap. A second win followed in 1983 at the South African Grand Prix. He also crashed out late in the race while leading at San Marino, but in a season which saw his team-mate Nelson Piquet claim his second Drivers' Championship title, Patrese finished a distant ninth. It would be seven years before he made another visit to the top step of the podium.

Patrese driving for Alfa Romeo in 1985.

A move to Alfa Romeo in 1984 delivered two lacklustre seasons resulting in eight world championship points and a single visit to the podium at his home Grand Prix.

In 1986 Patrese returned to Brabham, but by now the team was a spent force and would never again take a driver to victory in a grand prix. Two more winless seasons followed despite the team's BMW engine being considered at the time to be the most powerful on the grid. Despite the trials of uncompetitive machinery, Patrese never publicly criticised the team and earned respect throughout the sport for his professionalism. 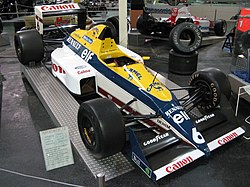 Toward the end of the 1987 season, Patrese was given the chance to revitalise what seemed to be a declining career when the Williams driver Nigel Mansell was injured whilst qualifying for the Japanese Grand Prix. With the help of Brabham owner Bernie Ecclestone, Patrese was drafted in to replace Mansell for the season's finale in Australia.

Patrese impressed the Williams management sufficiently to be signed by them as Nelson Piquet's replacement for the 1988 season. However, 1988 saw Williams struggling with an uncompetitive car powered by non-turbocharged Judd engines and it was not until the following year and the arrival of Renault engines that Patrese and his team-mate Thierry Boutsen were able to challenge for race points. Patrese finally won his third Grand Prix at the 1990 San Marino Grand Prix and finished that year's Drivers' Championship in seventh place.

In 1991 Nigel Mansell returned to Williams and, together with Patrese, the team became genuine contenders for both the Drivers' and Constructors' Championships. Two wins in Mexico and Portugal gave Patrese his most competitive F1 season thus far and a respectable third place behind Championship contenders Mansell and Ayrton Senna.

Williams dominated F1 in 1992 and Patrese continued to deliver in his role of second driver to Nigel Mansell, moving out of the way for Mansell while leading comfortably at that year's French Grand Prix. Patrese took a single win at the Japanese Grand Prix and visited the podium eight other times. With Alain Prost, Ayrton Senna and Nigel Mansell all desperately trying to sign for Williams, Patrese's position looked to be under threat and he signed for Benetton before the end of the year. Ironically, only Prost was able to agree terms with Williams for 1993 and would probably have been happy to have Patrese as a team-mate.

While Williams continued to dominate F1 in 1993, Patrese found it difficult to live with his prodigiously talented new team-mate Michael Schumacher and before the end of the season Benetton informed Patrese that he was "free to seek an alternate drive". As most teams already had drivers signed for 1994, Patrese opted for retirement and brought the longest F1 career in history to a conclusion.

In 2002, as thanks for his years of service to Williams, Patrese was invited to test the team's latest F1 car.

In 2005 he returned to racing in the inaugural season of the Grand Prix Masters formula for retired F1 drivers. He finished third behind his former team-mate Nigel Mansell and Emerson Fittipaldi in the sole 2005 race. His 2006 season has been less successful with a single 10th place to date.

By 2006 Patrese's record 256 Grand Prix starts had stood for more than 10 years. With Michael Schumacher retiring at the end of 2006 and thus finishing on 250 races, it would seem Rubens Barrichello is the likely man to break Patrese's record, assuming he races the full season in 2007.