Lombardy (Italian: Lombardia; Lombard: Lumbardìa) is a region in northern Italy between the Alps and the Po river valley. It borders the Italian regions of Piedmont, Emilia-Romagna, Veneto and Trentino-South Tyrol, as well as Switzerland.

One-sixth of Italy's population lives in Lombardy. Its capital is Milan, the largest city in Northern Italy. The current president of Lombardy is Roberto Formigoni. Pirelli Tower, the highest skyscraper in Italy (127 m), is the seat of Lombardy's regional government.

Lombardy is one of the engines of the global economy with a GDP calculated by ISTAT at €400 billion and a per capita GDP of $44,216. The Lombard GDP is higher than those of Saudi Arabia, Switzerland or Sweden. The region is one of the three richest in Europe, with a per capita gross domestic product that is 50 percent higher than the rest of Italy. In fact the latest Eurostat figures shows that Lombardy in 2003 had the highest GDP for a region in the whole of the EU. Many foreign and national companies have their headquarters in Milan. Manufactures include iron and steel, cars, mechanics components, chemical products, textiles, furnitures, leather, shoes and many others. The province of Brescia is well-known for the production of weapons. The productivity of agriculture is enhanced by a well-developed use of fertilizers and the traditional abundance of water, boosted since the Middle Ages by the construction of a wide net of irrigation systems. Lower plains are characterized by fodder crops, which are mowed up to eight times a years, cereals (rice, wheat and maize) and sugarbeet. Productions of the higher plains include cereals, vegetables, fruit trees and mulberries. The higher areas, up to the Prealps and Alps sectors of the north, produce fruit, vines, olives. Cattle (with the highest density in Italy), pigs and sheep are grown.

Lombardy is home to many top-rated clubs in football, rugby, ice hockey and basketball. More than a quarter of all immigrants to Italy live in Lombardy. The Milan Metro Area is the heart of Lombardy, and has more than 6.5 million inhabitants. Another large city in Lombardy is Brescia, with a metro area population of around 650 000 people.

The area of current Lombardy was settled at least since the 2nd millennium BCE, as showed by the archaeological findings of ceramics, arrows, axes and carved stones. In the following centuries it was inhabited first by some Etruscan tribes, who founded the city of Mantua and spread the use of writing; later, starting from the 5th century BCE, the area was invaded by the Celt (Gaul) tribes. This people founded several cities (including Milan) and extended their rule to the Adriatic Sea. Their development was halted by the Roman expansion in the Padan Plain from the 3rd century BCE onwards: after centuries of struggle, in 194 BCE the entire area of what is now Lombardy became a Roman province with the name of Gallia Cisalpina ("Gaul on the nearer side of the Alps"). The Roman culture and language overwhelmed the former civilization in the following years, and Lombardy became one of the most developed and rich areas of Italy with the construction of a wide array of roads and the development of agriculture and trade. Important figures like Pliny the Elder (in Como) and Virgil (in Mantua) were born here. In late antiquity the strategic role of Lombardy was emphasized by the temporary moving of the capital of the Western Empire to Milan. Here, in 313 CE, emperor Constantine issued the famous edict that gave freedom of confession to all religions within the Empire.

During and after the fall of the Western Empire, Lombardy suffered heavily from destruction brought about by a series of barbaric invasions. The last and most effective was that of the Lombards, or Longobardi, who came around 570s and whose long-lasting reign (whose capital was set in Pavia) gave the current name to the region. There was a close relationship between the Frankish, Bavarian and Lombard nobility for many centuries.

After the initial struggles, relationships between the Lombard minority and the Latin-speaking majority improved. In the end, the Lombard language and culture dissolved, leaving only minor traces in some names and laws. The end of Lombard rule came in 774, when the Frankish king Charlemagne conquered Pavia and annexed the "Kingdom of Italy" (mostly northern and central Italy) to his empire. The formed Lombard dukes and nobles were replaced by other German vassals, prince-bishops or marquises.

The 11th century marked a significant boom in the region's economy, due to improved trading and, mostly, agricultural conditions. In a similar way to other areas of Italy, this led to a growing self-acknowledgement of the cities, whose increasing richness made them able to defy the traditional feudal supreme power, represented by the German emperors and their local legates. This process reached its apex in the 12th and 13th century, when different Lombard Leagues formed by allied cities of Lombardy, usually led by Milan, managed to defeat the Hohenstaufen emperor Frederick I, at Legnano, and his nephew Frederick II, at Parma. This did not prevent other important Lombard centres, like Cremona (then rivalling Milan for size and wealth) and others, from supporting the imperial power if this could grant them an immediate advantage. Taking advantage of the flourishing agriculture, the area around the Po River, together with Venice and Tuscany, continued to expand its industry and commerce until it became the economic centre of the whole of Europe. The enterprising class of the communes extended its trade and banking activities well into northern Europe, and the name "Lombardy" came to designate the whole of Northern Italy until the 15th century.

From the 14th century onwards, the instability created by the unceasing internal and external struggles ended in the creation of noble seignories, the most significant of which were those of the Viscontis (later Sforzas) in Milan and of the Gonzagas in Mantua. In the 15th century the Duchy of Milan was a major political, economical and military force at the European level. Milan and Mantua became two centres of the Renaissance whose culture, with men like Leonardo da Vinci and Mantegna, and pieces of art were highly regarded. This richness, however, attracted the now more organized armies of national powers like France and Austria, which waged a lengthy battle for Lombardy in the late 15th-early 16th century. After the decisive battle of Pavia (1525), the Duchy of Milan became an Austrian possession, which was passed on to the royal austrian Habsburgs of Spain: the new rulers did little to improve the economy of Lombardy, instead imposing a growing series of taxes needed to support their unending series of European wars. The eastern part of modern Lombardy, with cities like Bergamo and Brescia, was under the Republic of Venice, which had begun to extend its influence in the area from the 14th century onwards (see also Italian Wars).

Pestilences (like that of 1648, described by Alessandro Manzoni in his I Promessi Sposi) and the generally declining conditions of Italy's economy in the 17th and 18th centuries halted the further devlopment of Lombardy. In 1706 the Austrians came to power and introduced some economical and social measures which granted a certain recovery. Their rule was smashed in the late 18th century by the French armies, however, and Lombardy became one of the semi-independent provinces of the Napoleonic Empire.

The restoration of Austrian rule in 1815, in the form of the puppet state called Kingdom of Lombardy-Venetia, had however to contend with new social ideals introduced by the Napoleonic era. Lombardy became one of the intellectual centres of the process which led to the Unification of Italy. The popular republic of 1848 was short-lived, and Lombardy was annexed to the Kingdom of Italy 1859 as a result of the Second Italian Independence War.

Starting from the late 19th century, and with a boom after World War II, Lombardy confirmed its status as the most economically developed area of Italy and Europe itself. The Christian-centre party of Democrazia Cristiana (DC) mantained a majority of the votes and rule of the most important cities and provinces until the late 1980s; support for the other traditional major force of Italian politics, the Italian Communist Party (PCI), was increasingly eroded by the Partito Socialista Italiano (PSI) until, in the early 1990s, the Mani Pulite corruption scandal which spread from Milan to the whole of Italy wiped away the old political class almost entirely. This, together with problems caused by immigration and the general disaffection towards Rome's government (considered too oriented to the less developed regions of southern Italy in economical matters), led to the sudden growth of the separatist party of Lega Lombarda (later Lega Nord), with somewhat plebiscitary consensus especially in agricultural areas and minor cities of the region. 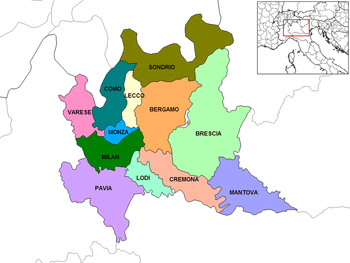 The region is divided into the following provinces, all named after their capital cities:

There are four main airports in Lombardy:

Milan's two airports are considered the most crowded Italian hub, with more than 30 million passengers a year.

The Suburban Railway Service (called "S" Lines, the service is similar to the French RER and German S-Bahn), composed of 8 commuter rail lines (10 as of 2008), connects the Milan Metropolitan Area ("Great Milan") and other important cities, like Como or Varese.

The Regional Railway Service (called "R"), on the other hand, links the cities of Lombardy and connects the region with the national railway system.