A massive sculpture of Lord Shiva holding a trident (Trishula) 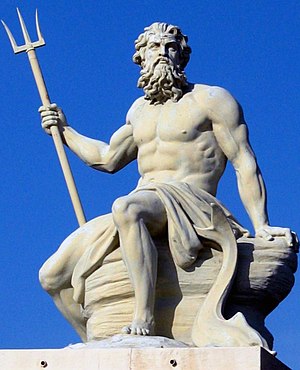 A trident is a three pronged staff or spear. The word's origin is from Latin tridens or tridentis, from tri "three" and dentes "teeth". It was used by fishermen to catch fish. As a weapon, it was also used by the retiarii, Roman gladiators, who used a net to wrap their adversary and a trident to kill him. In the southern United States, this type of spear, called a gig, is used for catching bullfrogs, flounder, and sometimes carp. This kind of fishing is gigging.

Information on real forked spears can be found in the article on the military fork.

From the fishing origins, the trident is often associated with Poseidon, the god of the sea in Greek mythology. By hitting the earth with his trident, Poseidon created the horse and some water sources in Greece. The Roman Gods, such as Neptune (parallel to Poseidon) also used a trident as a staff, and created earthquakes and new bodies of water. A good example can be seen in Gian Bernini's Neptune and Triton.

A trident has also references as: