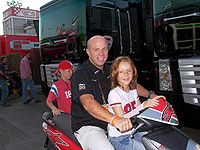 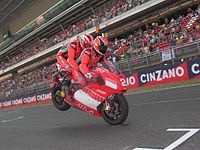 Randy Mamola with the Doubleseater-Ducati in Barcelona 2006

Randy Mamola (born November 10, 1959) is a former Grand Prix motorcycle road racer. He is considered one of the most talented riders never to have won a world championship.

He currently works as a television commentator for MotoGP races on the Eurosport network.

Mamola began raising money for Save the Children in 1986. On visits to Africa, he noticed that motorcycles being used to transport medical supplies to remote areas were breaking down and being abandoned due to poor training and maintenance. In 1996, he became one of the founders of Riders for Health, a charity which provides motorcycles and training to projects which give the population of rural Africa health and medical support. His fund-raising activities include giving passenger rides on a two-seater Ducati MotoGP bike.