Rallying (international) or rally racing (US) is a form of automobile racing that takes place on public roads with modified production or specially built road cars. This unique motorsport is distinguished by running not in a Formula One-style circuit, but instead in a point-to-point format where participants and their co-drivers “rally” to a set of points, leaving in regular intervals from start points. This distinctive approach to motorsport is not truly “racing” in the strictest sense, instead best seen as a parallel approach to that of circuit racing. The entertaining and unpredictable nature of the stages, and the fact that the vehicles are in some cases closely related to road cars, draws massive spectator interest, especially in Europe, Asia and Oceania.

While it is almost certain that similar competitions took place almost as early as there were cars, modern rallying originated in Europe in the early 20th century, and gained a modest foothold in car-crazy Europe. Not blind to the growing popularity, auto manufacturers began to support “works” or “factory” cars and sometimes entire teams in the events scattered around Europe throughout the year, and eventually a European Championship series was arranged, awarding points to the top finishers of the various respective events and standardizing rules. Later to become the World Rally Championship, this was a large step forward for rallying. There were negatives, however, as countries with multiple rallies were ultimately forced to nominate a single event for the regional and later world championship to the detriment to the other rounds. The movement truly hit its stride after the Second World War, reaching its romantic “Golden Age” in the 1960’s as the Post-WW2 baby boom generation began to grow up. Soon after, sponsors’ advertisements began to pock the paint of the rally cars, and the commercialization that permeates the modern sporting world began to change rallying forever. Drivers became paid professionals and technology advanced at shocking speeds, almost totally unhindered until the mid-eighties. The World Rally Championship now visits nearly all continents, taking its stylish sideways driving style and specialized cars to a vast global market, estimated by some to be second only to the Formula One juggernaut. This has produced unprecedented levels of visibility in recent years, but in many ways removed the motorsport from its “grassroots” past. For better or worse, rally has become a lucrative business. 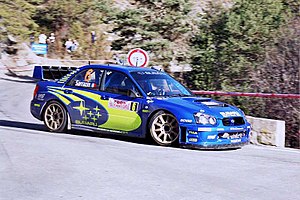 In the industry-leading FIA World Rally Championship, the cars used are built to current World Rally Car specification. Previously Group A and Group B specification machines (very powerful turbocharged engines in lightweight bodies) were used. Group B cars were banned in 1986 because of an unacceptable number of deaths and injuries among drivers and spectators. It is worth noting, though, that due to advances in technology today's WRC rally cars are actually much faster than those in the Group B era, due mainly to superior braking technologies; not one Group B record stage time stands on the world circuit. Deaths are now very rare thanks to modern safety regulations including the HANS device and improved spectator control policies, but rallying retains its own particular dangers, as shown by the death in 2005 of co-driver Michael Park (admittedly the first fatality at the top level in over a decade).

Rally is also unique in its choice of where and when to race. That is to say, rally happens on all surfaces and in all conditions, asphalt (tarmac), gravel, snow & ice, all surfaces are valid and sometimes more than one on a single rally. It depends on the course most rally is point to point racing. Which refers to sectors each stage is time by how fast the drive is. You can also find rallies in every month of the year in every climate; bitter cold to monsoon rain. This contributes to the notion that top rally drivers are some of the best car control experts in the world. Because the drivers don't know exactly what's ahead, the lower traction available on dirt roads, and the driving characteristics of small cars, the drivers are much less visibly smooth than circuit racers, regularly sending the car literally flying over bumps, and sliding the cars out of corners.

A typical rally course consists of a sequence of relatively short (up to about 50 kilometers) timed "special stages" where the actual competition takes place, and untimed "transport stages" where the rally cars must be driven under their own power to the next competitive stage within a generous time limit. Rally cars are thus unlike virtually any other top-line racing cars in that they retain the ability to run at normal driving speeds, and indeed are registered for street travel. Some events contain "super special stages" where two competing cars set off on two parallel tracks (often small enough to fit in a football stadium), giving the illusion that they are circuit racing head to head. These stages, ridiculed by many purists, seem increasingly popular with event organizers. Run over a day, a weekend, or more, the winner of the event has the lowest combined special and super special stage times. Given the short distances of super special stages compared to the regular special stages and consequent near-identical times for the frontrunning cars, it is very rare for them for these spectator-oriented stages to decide rally results.

In most rallies, including those of the World Rally Championship (WRC), drivers are allowed to run on the tracks of the course before competition. In these reconnaissance drives, the co-drivers, who sit next to the drivers, write down shorthand notes on how to best drive the stage. Usually the drivers call out the turns and road conditions for the co-drivers to write down. These "pace notes" are read aloud through an internal intercom system during the actual race, allowing the driver to anticipate the upcoming terrain and thus take the course as fast as possible.

In the past—and until recently in North America—most rally courses were not allowed to be scanned prior to the race, and the co-drivers used maps supplied by the organization. The exact route of the rally often remained secret until race day. This is changing though, as rallies throughout North America are now switching to either organizer supplied "route notes" or to full reconnaissance or "Recce" (pronounce Wreck-E). This change has been brought on in large part due to competitor demand. Recce makes the competition experience faster, safer, and more satisfying for the entrant.

A Subaru Impreza WRX competing in a rally.

Rallying is a very popular sport at the "grass roots" of motorsport—that is, motor clubs. Individuals interested in becoming involved in rallying are encouraged to join their local clubs. Club rallies (e.g. Road rallies) are usually run on public roads with an emphasis on navigation and teamwork. These skills are important fundamentals required for anyone who wishes to progress to higher-level events. Additional information about the jargon and rules of rally racing are available through the following links: