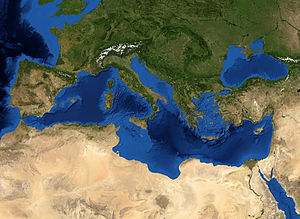 It was a superhighway of transport in ancient times, allowing for trade and cultural exchange between emergent peoples of the region — Egyptians,Phoenicians, Carthaginians, Greeks, Romans, and the Middle-East (Arab/Persian/Semitic) cultures. The history of the Mediterranean is important in understanding the origin and development of Western Civilization.

The Mediterranean Sea has been known by a number of alternative names throughout human history. It was, for example, commonly called Mare Nostrum (Latin, Our Sea) by the Romans. In the Bible, it is referred to as the Great Sea or the Western Sea. In modern Hebrew, it is called "ha-Yam ha-Tichon" (הים התיכון), "the middle sea", a literal adaptation of the German equivalent Mittelmeer. In Turkish, it is Akdeniz, "the white sea". In Arabic, it is Al-Baħr Al-Abyad Al-Muttawasit (البحر الأبيض المتوسط), "the middle white sea".

Currently, "The Med" is a common British English contraction for the Mediterranean Sea and its surrounding regions when employed in informal speech.

Tides are very limited in the Mediterranean as a result of the narrow connection with the ocean.

The Mediterranean climate is generally one of wet winters and hot, dry summers. Special crops of the region are olives, grapes, oranges, tangerines, and cork. The region has a long history of civilization.

Large islands in the Mediterranean include:

A view across the straits of Gibraltar

The Mediterranean Sea is sub-divided into a number of smaller seas /some names may be come from the ancient legends/, each with their own designation (from west to east):

In addition to the seas, a number of gulfs and straits are also recognised:

The geology of the Mediterranean is complex, involving the break-up and then collision of the African and Eurasian plates, and the Messinian Salinity Crisis in the late Miocene when the Mediterranean dried up.

In the last few centuries, mankind has done much to alter Mediterranean geology. Structures have been built all along the coastlines, exacerbating and rerouting erosional patterns. Many pollution-producing boats travel the sea that unbalance the natural chemical ratios of the region. Beaches have been mismanaged, and the overuse of the sea's natural and marine resources continues to be a problem. This misuse speeds along and/or confounds natural processes. The actual geography has also been altered by the building of dams and canals.

The Mediterranean was once thought to be the remnant of the Tethys Ocean. It is now known to be a structurally younger ocean basin known as Neotethys. Neotethys formed during the Late Triassic and Early Jurassic rifting of the African and Eurasian plates.