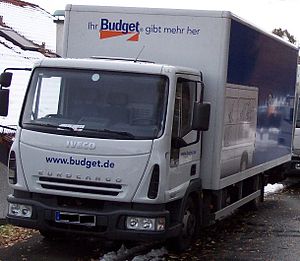 IVECO is leading European truck, bus, and diesel engine manufacturer based in Turin, Italy. It is a subsidiary of the Fiat Group, and produces around 200,000 commercial vehicles and 460,000 diesel engines annually, and for the year ended 2003 the company had €8,440 million in sales (revenues).

The name is an acronym for Industrial VEhicle COrporation, an alliance among leading European commercial vehicle manufacturers such as Fiat (including Officine Meccaniche and Lancia VI), Unic and Magirus.

Today the company is a leading player in the medium-duty commercial vehicle and engine markets, it is also near the top for sales of passenger transport, and is one of the leaders in the 3.5 ton light vehicle segment.

The company is dominated by Fiat, and was created in 1975 by the merger of five companies operating in Italy, France and Germany; Fiat Veicoli Industriali (located in Turin), OM (Brescia), Lancia Veicoli Speciali (Bolzano), Unic (Trappes) and Magirus (Ulm). Numerous important steps have marked its evolution since then.

In its early years, the company focused on rationalizing, integrating and optimizing the various manufacturing and commercial structures that had been independent until then, and the first centralized functional structure emerged. From a marketing viewpoint, these years saw the launch of the Daily (1978), the Turbo (1981) and the Turbostar (1984), three vehicles that symbolized Iveco's entrepreneurial success in Europe.

Iveco had to overcome a crisis in the early 1990s, a new period of change began, fuelled by increasingly fierce competition. In order to respond more effectively to the growing specialization of the market, Iveco broke its structure down into specialist corporate units that addressed specific customers divided by product type. In those years, the company continued to boost its strategic presence in the world. In 1992 Iveco purchased the Ital company, Iveco Trucks Australia Limited, which still plays a very important role in the Pacific Rim. And Iveco Mercosul was created in Brazil in 1997, an essential base for manufacturing and distribution operations all over South America.

In 1995 the EuroClass luxury coach was voted International Coach of the Year, and in 1999 Iveco and Renault decided to combine their efforts in the public transport field by merging their respective bus operations. The result was Irisbus, one of the major manufacturers in the passenger transport sector, which was further strengthened by the acquisition of the Hungarian company Ikarusbus.

Constantly growing attention was paid in those years to the integration of products and services, both to respond comprehensively to customers' requirements and to combat the extremely cyclic nature of the automotive market. This strategy led to the creation of Transolver in 1997, which took Iveco into the world of financial services.

On the commercial front, in 1998 the EuroCargo, which was sold in over ninety countries and led the market in Italy, the United Kingdom, Spain, Bulgaria and Slovenia, was voted the "Best Imported Truck" in Germany. In 2000 it was the light segment that won awards, when the Daily was voted "International Van of the Year", and the one-millionth vehicle left the assembly line.

Today Iveco has 49 factories, 15 research and development facilities, 840 dealers, 31,000 employees, and is in 19 countries. 40% of the engines Iveco manufactures go to Iveco vehicles, 60% are sold as OEM units for automotive, industrial, agricultural, marine, and power generation applications. It is a major European producer of fire-fighting vehicles.