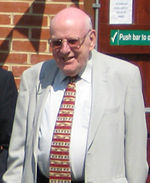 Sir Francis Owen Garbatt Williams (b. April 16, 1942) is founder and manager of the WilliamsF1 Formula One racing team.

Born in County Durham, England, to an RAF bomber pilot and a special education teacher, Williams spent much of his childhood at a boarding school in Scotland. In the late 1950s a friend gave Williams a ride in his Jaguar XK150s; Williams was immediately hooked.

After a brief career as a driver and mechanic, funded by his work as a traveling grocery salesman, Williams founded Frank Williams Racing Cars in 1966; he ran drivers Piers Courage, Richard Burton, Tetsu Ikuzawa and Tony Trimmer for several years in Formula Two and Formula Three. Williams purchased an old Brabham Formula One chassis; Courage drove it in several F1 events, coming in second place twice.

In 1970 Williams undertook a brief partnership with Alessandro de Tomaso; after the death of Courage at the Dutch Grand Prix, his relationship with de Tomaso was over by the end of the year. In 1971 he raced Henri Pescarolo in a chassis he had purchased from March Engineering; 1972 saw the first F1 car built by the Williams works, the Politoys FX3 designed by Len Bailey, but Pescarolo crashed and destroyed it at its first race.

Williams, short on cash (he conducted team business from a telephone box at one point after being disconnected for unpaid bills), looked to Marlboro and Iso, an Italian car company, for sponsorship. Though they pledged their support, they did not come through in time and in 1976 Williams desperately took on a partner, oil magnate Walter Wolf. Though the team continued functioning, it no longer belonged to Frank Williams, so he left in 1977 along with one of his old employees, engineer Patrick Head. The two acquired an empty carpet warehouse in Didcot, Oxfordshire, United Kingdom and announced the formation of Williams Grand Prix Engineering; this same team and partnership still competes in Formula One and is known as WilliamsF1. Their first win came in 1979 from Clay Regazzoni, the first title in 1980 with Alan Jones, and a further success in 1982 with Keke Rosberg.

A car accident in March 1986 in France left him paralyzed and confied to a wheelchair. While driving a rental car from the Paul Ricard Circuit to the Nice airport Williams lost control and the car rolled over causing Williams, who may not have been wearing a seatbelt, to crash into the roof causing a spinal fracture. Peter Windsor, Williams' passenger, sustained only minor injuries.

In 1987 the Queen awarded Williams the title of CBE; he became a KBE in 1999. He is also one of the few non-Frenchmen to have been made a Chevalier of France's Legion d'Honneur; this honor was accorded for his work with Renault engines.

In May 1994, following the death of Ayrton Senna da Silva in a Williams at Imola, he was charged with murder in accordance with Italian law, but was finally cleared after several years when other constructors said they would not race in Italy if an accident could cause that kind of reaction.

At the moment Frank Williams' son Jonathan is currently working for GP2 team iSport International and looks to be adept at spotting new talents.