A flying boat is an aircraft that is designed to take off and alight upon water. Although some argue that it is a distinct class in its own right, others consider it as a type of seaplane which uses its fuselage as a floating hull (instead of pontoons mounted below the fuselage).

Flying boats were among the largest aircraft of the first half of the 20th century. Their ability to alight on water allowed them to break free of the size constraints imposed by general lack of large, land-based runways, and also made them important for the rescue of downed pilots, a capability put to great use in World War II. Following World War II, their use gradually trailed off, with many of the roles taken over by other aircraft types. In the 21st century, flying boats maintain a few niche uses, such as for dropping water on forest fires and for air transport around island clusters.

The flying boat NC-4 was the first airplane to fly across the Atlantic Ocean in 1919. In the 1920s and 1930s, flying boats made it possible to have regular air transport between the U.S. and Europe, opening up new air travel routes to South America, Africa, and Asia. Foynes in Ireland, across the River Shannon from today's Shannon International Airport was the terminus for many early transatlantic flights. Where land-based aircraft lacked the range to travel great distances and required airfields to land, flying boats could stop at small island, river, lake or coastal stations to refuel and resupply. The Pan Am Boeing 314 "Clipper" planes brought exotic destinations like the Far East in reach of air travelers and came to represent the romance of flight. BOAC and Imperial Airways provided flying boat passenger and mail transport links between Britain and South Africa, Australia and New Zealand using aircraft such as the Short Empire and the Short S.8 Calcutta.

The military value of flying boats was quickly recognized, and they were utilized by various nations in tasks from anti-submarine patrol to maritime search and rescue. Aircraft such as the PBY Catalina and Short Sunderland recovered downed airmen and operated as scout aircraft over the vast distances of the Pacific Theater and Battle of the Atlantic during World War II. The largest flying boat of the war was the Blohm und Voss Bv 238 which was also the heaviest plane to fly during the Second World War.

The Hughes H-4 Hercules in development in the U.S. during the war was even larger than the Bv238, but it did not fly until 1947. The "Spruce Goose", as the H-4 was nicknamed, was the largest flying boat ever to fly. That short 1947 hop of the 'Flying Lumberyard' was to be its last however, a victim of post-war cutbacks and the disappearance of its intended mission as a transatlantic transport. 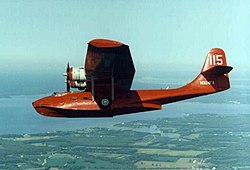 By this time the age of the flying boats was largely at an end. Several factors contributed to the decline. The ability to land on water became less of an advantage owing to the considerable increase in the number and length of land based runways, which had been driven by the needs of the allied forces during the Second World War. Further, as the speed and range of land-based aircraft increased, the commercial competitiveness of flying boats diminished, as their design compromised aerodynamic efficiency and speed to accomplish the feat of waterborne takeoff and alighting. Competing with new civilian jet aircraft like the De Havilland Comet and Boeing 707 was impossible. Helicopters overtook the flying boats in their air-sea rescue role. The land-based P-3 Orion and carrier-based S-3 Viking became the US Navy's fixed-wing anti-submarine patrol aircraft.

The shape of the Spruce Goose was a harbinger of the shape of larger aircraft yet to come, and the type also contributed much to the designs of later ekranoplans. However, true flying boats have largely been replaced by seaplanes and amphibian aircraft. The Beriev Be-200 twin-jet amphibious aircraft is one of the closest 'living' descendants of the flying-boats of old, along with the larger amphibious planes used for fighting forest fires.